“We are not very happy with the CEO of Volkswagen!” Jorgo Chatzimarkakis – a former member of the European Parliament who in 2016 became the secretary-general of industry association Hydrogen Europe does not hide his disappointment with the recent announcement by VW Chief Herbert Diess and his colleagues from BMW and Daimler.

They have said that they will concentrate on electric cars for the time being and will leave hydrogen fuel cell cars on the shelf. “We are fed up waiting for the German OEMs (original engine manufacturers),” he says. “Why do I need to drive a Hyundai hydrogen car? Daimler have 25 years of experience in this area but they are very slow to bring it to market.”

But Chatzimarkakis (pictured below), who was special envoy for the Greek government during the financial crisis, is not one to easily accept defeat. He tells me the hydrogen sector will be building its own brand of hydrogen cars in the coming years. “We don’t need the big car companies! We will build up our own European hydrogen car brand, starting in the Eindhoven-Aachen region, with strong European players based in that region. We are planning to build four different types of hydrogen cars, including an SUV and a light-duty vehicle.” 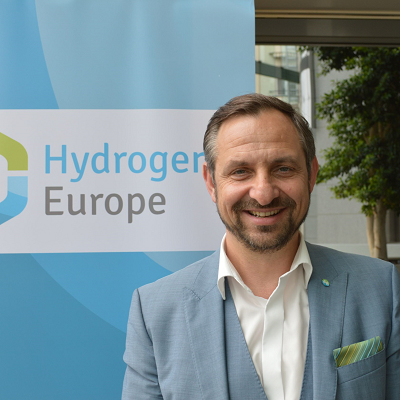 He adds that “I just received a press release from my home state, Saarland, which has announced that it will support a project to retrofit combustion trucks to run on hydrogen. At this moment it is much cheaper to retrofit a diesel truck than to change its engine and replace it with fuel cells.”

Chatzimarkakis is full of ideas when it comes to promoting hydrogen. But despite his annoyance with German car companies, it would be a mistake to think that the hydrogen sector is betting only on mobility. I discover that much, when I speak with him on the phone -- ‘Mr Hydrogen’ as he is sometimes called in Brussels -- to find out how the European hydrogen sector views its future.

It turns out that mobility is not at all the main show in hydrogen town. At least not any more. “Until 2016, we were in a bit of a cul-de-sac,” says Chatzimarkakis, “because we were focusing too much on mobility. But for hydrogen this is only a niche. Hydrogen is far more than mobility. Hydrogen means sector integration. It is a key enabler of a zero-emission energy system. It is the glue that will keep the energy system together if you want to get 100% decarbonisation by 2050.”

This potentially promising new role of hydrogen, as a way to transport and store renewable energy, and to replace natural gas in heating and electricity generation, is now widely understood in policy-making circles in Brussels, says Chatzimarkakis. “Policy-makers seem to be quite disappointed with the electricity sector. Until recently they believed electrification and renewable energy could get them to 95-100% emission reductions. They now realise this is utopian. They have discovered there is physics, laws of nature, not to mention extremely high costs, that make this an impossible dream.”

Chatzimarkakis says this reappraisal of hydrogen will be reflected in the upcoming fourth Gas Package, a set of EU-wide legislative proposals for the gas market that the European Commission is expected to introduce in 2020. “The first three Gas Packages dealt with the quality of gas, interconnections and network codes,” he explains. “The new Package will also look very much at how the gas grid can be an addition and perhaps even the main driver of decarbonisation in Europe. So for the first time, the Gas Package will be about how the gas infrastructure can be used for renewable gas and hydrogen.”

Until recently gas infrastructure companies in Europe worried that they might be left with stranded assets, says Chatzimarkakis. But they have become much more upbeat. “All the TSOs [gas transmission system operators] now see this as an opportunity, not as a threat.”

Not that the gas grid will replace the power grid. “We should not make the same mistake as the electricity sector and overpromise. We don’t say we can do it all by ourselves. The studies we have done are down to earth and doable.” What is needed now, says Chatzimarkakis, is legislation that will enable the industry to deliver on its potential. “We need proper remuneration schemes. We might see targets for renewable gas. If policy-makers set targets, you can expect the market to deliver.”

What about the gas supply companies? Will they have a role in the renewable gas system of the future? “Oh yes,” says Chatzimarkakis. “They are also part of the European hydrogen family. They are all very interested in the new opportunities hydrogen could offer for them. If hydrogen is imported e.g. through Italy and transported to Austria, the Austrians could transport it onwards, but they could also use it – turn it into synthetic fuels, for example. It could become a new industry for them. We know synfuels are not the most efficient, but in a sector like aviation there are few alternatives. Even if you restrict synfuels to the aviation sector, you would still have a huge market.”

Chatzimarkakis does not doubt that Europe will be importing hydrogen on a large scale in future. “It’s obvious if you do the maths. The petrochemical industry and steel industry will need large amounts of hydrogen if they want to decarbonise. You can’t produce all of that in Europe, certainly not on the basis of renewables, through electrolysis. The Netherlands may have the possibility to produce hydrogen with offshore wind, but other countries don’t have such opportunities.”

Chatzimarkakis sees hydrogen coming from North Africa, the Middle East, Australia, Chile, Ukraine. “Saudi Arabia is investing in electrolysers. They are very interested. If you want green hydrogen, you will get green hydrogen, they told me. We can ship it as ammonia, methanol, however you want it.”

He is not worried about the implications for security of supply. “Importing energy does not have to be threatening. There is no other way. People should sit down and do the maths. It is a myth to think you can deliver all your energy with electrons and windmills. But we will be importing hydrogen from many different countries, not just Saudi Arabia and Russia. Supply will become much more diverse.”

Chatzimarkakis is also convinced that “blue hydrogen”, based on natural gas, in combination with carbon capture and storage (CCS), will be essential to meet demand for zero-emission energy. A promising new method to produce hydrogen from natural gas is pyrolysis. “With this method you get hydrogen and solid carbon, called carbon black, which can be used in cars and batteries, or buried underground. This may be four to five times cheaper than electrolysis. Companies like BASF and Gazprom are very interested in this.”

Mr Hydrogen believes the existing fossil fuel industry, led by companies like Shell, will play a key role in the decarbonisation of the energy sector if the right incentives are in place. “According to the new Renewable Energy Directive, which was adopted by the EU last year, refineries will be allowed to use emission-free hydrogen in their products to meet their greenhouse gas reduction targets.

Right now they can only meet their targets by using biofuels, which is not ideal. That’s a step forward, although the member states still have to implement this directive correctly.” To his disappointment, some green NGOs oppose the measure, because it will keep refineries in business. “They call it greenwashing. That does not make sense to me.”

Chatzimarkakis, who has long experience of European and German politics, believes that in the end what would work best for EU climate policy is to adopt an EU-wide price on carbon. The existing EU Emission Trading System (ETS), which started in 2005, is too political, he says. “When I became MEP in 2004, I believed in emission trading, but I soon became disappointed. I don’t think this can ever become a real market. There are too many inconsistencies. What we need is a Europe-wide carbon price that does not just punish carbon emissions, but makes carbon valuable. Then the market would come up with the best solutions.”

Georgios “Jorgo” Chatzimarkakis, who has German and Greek nationality, was born in Duisburg, Germany, in 1966. He holds a degree in agriculture and politics from the University of Bonn, worked for the Germany foreign office, and as an associate professor in the field of European politics. He was a member of the executive board of Germany’s liberal party FDP (Free Democrats) from 1995 to 2011 and secretary-general of the SDP branch in the German state of Saarland from 2002 to 2010. From 2004 to 2014 he was a member of the European Parliament. He was appointed special envoy for the Greek government during the financial crisis. In 2016, he became head of the European industry association Hydrogen Europe, which represents more than 100 industry companies, 68 research organisations as well as 13 national associations. Hydrogen Europe partners with the European Commission in the innovation programme Fuel Cells and Hydrogen Joint Undertaking (FCH JU), under which the hydrogen sector received €1.4bn in EU subsidies over a seven-year period.