Coal’s share in power generation in the 27 EU nations averaged almost 18% in the first half of 2022, a bit higher than the same period last year when its share was closer to 16%, according to data published by climate think tank Ember. Coal’s share in EU power is similar to that of natural gas which stood at 20% in the first half of 2022 compared with a share closer to 18% in the same period last year.

Strong demand for coal in power generation comes despite the fact that several EU nations have announced phase-out plans for coal in recent years. It also comes amid closures, or planned closures, of several coal power plants in recent years owing to poor profitability not least because of the sharp increase in prices for carbon allowances under the EU’s Emissions Trading System (ETS). Coal emits more CO2 than natural gas when used for power generation and this means plant operators must buy comparatively more EU carbon allowances to cover their emissions.

However, Russia’s invasion of Ukraine in February has turned the energy markets upside down. Rocketing gas prices means that coal again looks like an economically viable fuel. Moreover, low hydro levels in several European nations coupled with the fact that around half of France’s nuclear fleet is online for maintenance and repair works means that coal has stepped in to fill the supply gap in electricity.

“If gas prices had not gone up as much as they have, coal would not have been so competitive today given the still massive cost of EU carbon allowances," says Brian Ricketts, secretary general at EURACOAL, the association for the European coal industry.

"It now looks like we will be using more coal in the coming years, but without compromising EU climate targets. At the same time, there is little investment in new production capacity, so markets will remain tight. In Europe, import dependence will remain high.”

Concerns over energy security have led to a shift in coal policy, at least in the short term. Germany, despite its coalition government’s plan to phase out coal in power by 2030, is bringing back about 10 GW of coal-fired capacity from reserves while other European nations, including the UK, is postponing closures of plants. The UK is even investing in new supply; In December, the government gave approval for West Cumbria Mining company to build the country’s first coal mine in decades, Woodhouse Colliery, which will supply the steel industry.

Although lower than gas prices, coal prices have also been extremely volatile in recent months, with front-month ARA (Amsterdam-Rotterdam-Antwerp) prices trading above $370/metric ton in early September. Prices had fallen to about $225/mt by December 14, but that is still around double the level this time last year, according to ICE data.

“Prices have come down from the very high levels seen earlier in the year, but they are still high, reflecting strong demand,” says Ricketts.

The EU’s ban on Russian coal, effective as of August 2022, has done little to calm the market. EU nations imported about 51mn mt of hard coal from Russia in 2021—about 52% of total imports and about 48mn mt of thermal coal, which accounts for almost 70% of imports, according to a report by EURACOAL. In Europe, Germany and Poland were the biggest importers of Russian coal. The US and Japanese sanctions on Russian coal is expected to have less of an impact. 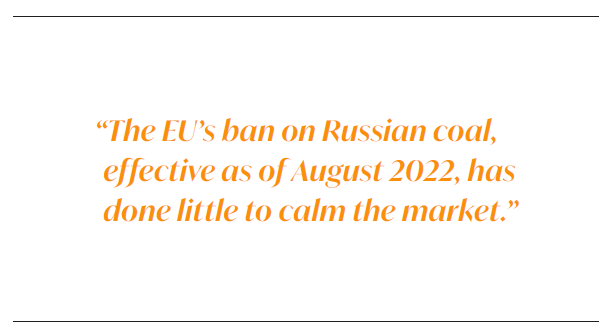 Shorter freight rates meant that Russian coal was historically cheaper compared with other major suppliers to Europe such as the US and Columbia. In Eastern Europe, including Poland, some power plants are designed to run specifically on Russian coal meaning substitution to a different grade of coal is not straightforward.

Ricketts says coal stocks at ports in northwest Europe have been at a high level in anticipation of the EU ban on Russian coal imports since August 10.

Other suppliers, including Australia and Indonesia, have ramped up exports to Europe. Indonesian coal is generally of poorer quality than say Polish coal, Ricketts says, but is being used by power generators in Italy and elsewhere which can use lower-grade coal.

As for Russian coal, India has ramped up imports significantly and this has replaced a big chunk of Europe’s demand. The exact volume is difficult to determine as Russia is no longer publishing export figures.

More coal supply from Australia to Europe coincides with the first Australian LNG tanker in almost a decade arriving in Europe in November. With European nations scrambling for energy supply, the long shipping route from Australia and related costs no longer seems to be a hindrance.

Yet, as with LNG, the availability of coal from global markets is not always predictable.

Ratings agency Fitch noted in a recent research note that Australia’s coal production has been constrained by the wet weather this year, as flooding disrupted many mines in New South Wales and Queensland states. The impact persisted into the second half of 2022.

Coal exports from Australia declined by 16.4% year/year in Q3 2022 and by 7.2% year to date as the country’s main coal producing province, New South Wales, saw the wettest October on record.

Meanwhile, Indonesia’s coal exports declined by about 17% quarter/quarter in the first three months of 2022, following a coal export ban by the government which has since been lifted, Fitch noted.

As with LNG, European and Asian coal prices are interlinked.

Fitch noted that the benchmark Newcastle 6,000kcal/kg coal price stayed above $400/mt in most of Q3 2022, “driven by the energy crisis in Europe and on-and-off supply constraints in Australia.“

“However, a recent sharp fall in gas and coal prices in Europe, as a result of

ample non-Russian supplies and warm weather has affected the Asian market,” Fitch said, adding Newcastle prices had dropped to $320/mt from around $450/mt in early September.

Recent developments demonstrate that kicking Europe’s coal habit will take time. And if gas shortages persist, which many expect they will, coal will have a role to play for the foreseeable future. Not long ago, it seemed like gas was winning the ‘fuel competition’ in EU power, but tables have turned - at least for now.

In the longer term, coal will face headwinds from an expansion of renewables generation as nations scramble to comply with climate targets. This could give more room for gas as a bridge fuel in the energy transition.

“Higher natural gas prices amid the global energy crisis have led to increased reliance on coal for generating power, but slowing economic growth has at the same time reduced electricity demand and industrial output – and power generation from renewables has risen to a new record,” the International Energy Agency (IEA) said in a report published on 16 December.

“Europe, which has been heavily impacted by Russia’s sharp reductions of natural gas flows, is on course to increase its coal consumption for the second year in a row. However, by 2025, European coal demand is expected to decline below 2020 levels.