The European Commission will this autumn outline a proposal for a new set of gas market rules which will revamp the existing Gas Directive and Regulation adopted in 2009, now considered outdated. The new Hydrogen and Decarbonised Gas Package will outline how renewable, synthetic and decarbonised gases will be incorporated into the gas market. It falls under the Fit for 55 package which is a move by Brussels to better align legislation with the EU’s recently adopted target of cutting greenhouse gas (GHG) emissions by 55% compared with 1990 levels. A public consultation is open until June 18 and has already triggered plenty of reactions from major industry players including Shell, Total, Eni and Equinor.he existing Gas Directive and Regulation set out rules for third party access and ownership unbundling of gas pipelines and storage facilities. Back then, the EU was keen to break up monopolistic behaviour in gas markets to foster competition and strengthen security of supply, not at least after 2006 disruption in Russian gas flows to Europe via Ukraine for several days. Notably, the Directive and Regulation were adopted by the EU institutions six months after the second Russia-Ukraine gas crisis in 2009.

Today, the EU gas market is much better functioning and resilient to supply shocks, with gas flowing more freely across borders. This is also illustrated by the emergence of the Dutch TTF as a liquid benchmark hub. The new Gas Package is therefore expected to be built on the same principles of competition and fair access to infrastructure. Brussels, and many industry players alike, want to avoid a situation whereby hydrogen networks are owned and operated by monopolies potentially denying access for new entrants. For example, the European Commission, in its impact assessment, raised the question if gas transmission system operators (TSOs) should be allowed to operate electrolysers. 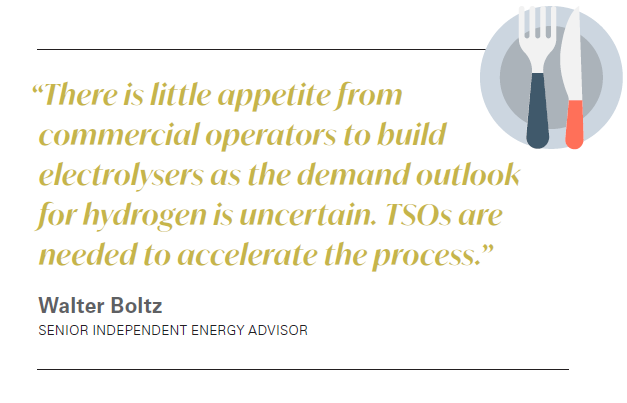 Brussels has set a target of 40 GW electrolyser capacity in EU countries by 2030. For producers of renewable electricity, it will be key to get access to this capacity in order to convert the electricity they produce to hydrogen and ship it through networks. Some see it as problematic that TSOs own both the networks and the electrolyser capacity. Others believe TSOs are in a good position to build and operate this capacity as long as the EU designs a fair access regime for third parties.

"There is little appetite from commercial operators to build electrolysers as the demand outlook for hydrogen is uncertain. TSOs are ready to make those investments, and I do not think it is at odds with the unbundling regime if they own and operate electrolysers. TSOs are needed to accelerate the process," Walter Boltz, a senior independent energy advisor, tells NGW.

A number of countries including the UK, the Netherlands and Germany are planning to develop industrial clusters to decarbonise hard-to-abate sectors such as steel and petrochemicals. Shell said in its response to the public consultation that gas TSOs should be allowed to develop dedicated hydrogen and CO2 pipelines for CCS infrastructure in such clusters. The involvement of gas TSOs should not result in crowding-out of commercial investment and competition in production and supply, it added.

“Over time, renewable and low-carbon hydrogen should become a tradeable commodity in a liquid European wide internal market,” said Shell. “To start the hydrogen market and enable commercial players to invest with confidence, the regulatory framework should mirror the main features of the gas regulatory framework: unbundling, third-party access and cost-efficient non-discriminatory tariffs.”

But one challenge with industrial clusters is that they may be disconnected from networks, with only one single hydrogen producer within the cluster, effectively eliminating competition.

"The risk with hydrogen clusters is that one hydrogen producer may have a dominant position in supplying the industrial consumers. If the cluster is not linked to another network, then the hydrogen producer can set the price without competition from other producers," explains Boltz.

A revamp of the existing legislation is also an opportunity to revisit the access regime for LNG terminals. LNG terminals are, broadly speaking, much less regulated than pipelines meaning it can be difficult for shippers to obtain third party access on a nondiscriminatory basis and that transparency is often lacking. Rendering the operation of LNG terminals more transparent and accessible, the commission said, would “ready for imports of renewable and low carbon gases.” Germany, for example, has signed collaboration agreements with Saudi Arabia, Canada and Australia for potential imports of hydrogen and ammonia at its planned LNG terminals.

Security of demand also needs to be addressed. In the stakeholder consultation, French major Total called for a binding 2030 EU target of renewable gas by energy content in the natural gas grid for 2030. European gas lobby Eurogas specifically called for a binding target of at least 11% of renewable gas. A number of stakeholders – Total, Engie, and Shell among them – also called for an EU-wide Guarantees of Origin (GOs) market to replace the current, fragmented national markets. GOs would give traders and end-users the opportunity to check the origin of the gas, whether renewable, decarbonised, synthetic or blended. However, industry players acknowledged that GOs and binding targets for renewable gases should be tackled by the Renewable Energy Directive (RED) which is also under revision this year.

The revised RED will align the EU’s renewables target with the new 55% by 2030 GHG emissions reduction target. That means the current renewables target of 32% by 2030 will have to be scaled up to around 40%, or possibly more. Players in the gas industry want decarbonised gases utilising CCS to count towards the renewables target, but this is meeting strong opposition from green groups, a number of MEPs and some utilities such as Enel and Iberdrola.

As for EU grants, the revised TEN-E regulation will set out new rules for eligibility. Under the new regulation, natural gas pipelines will no longer be eligible for status as Projects of Common Interest (PCI) which excludes them from receiving grants under the Connecting Europe Facility infrastructure fund. On the contrary, hydrogen and CO2 transportation projects will be eligible for PCI status and financial support. The new rules are expected to enter into force in 2023. Meanwhile, the Taxonomy Regulation is key for financing from the private sector. Yet the EC has still not decided to what extent gas fired-power plants can be classified as a green investment under Taxonomy, for example if they replace coal plants. It is expected to make that decision later this year.

The EU’s flagship climate tool, the Emissions Trading System (ETS), has favoured gas over coal in power generation. Whereas coal has been squeezed out in several countries, the UK and Spain among them, gas has defended or expanded its market share despite a sharp increase in prices for carbon allowances. Further ETS reforms, a tightening of the cap on allowances and the possible inclusion of the shipping sector, are expected to be agreed later this year. If prices for carbon allowances move higher, as many expect they will, coal plants look set to lose further market share while modern and efficient CCGT plants will be much better positioned.

All eyes are also on the upcoming proposal for a methane regulation later this year, which is an effort to strengthen reporting and monitoring requirements of methane emissions for oil and gas companies. Addressing methane leakage will be key for natural gas to position itself as a credible bridge fuel in the energy transition. One challenge for the EU, however, is that methane emissions from gas production in Europe are modest compared with third countries such as Russia, Algeria and the US, which export plenty of gas to Europe.