On 14 October 2020, the European Commission announced a Methane Strategy which stipulates a need to include methane emissions reduction into climate neutrality objectives. The document encourages business-led voluntary mechanisms in verification and monitoring, and envisages public-private partnerships to reduce emissions. From 2021 onwards, further legislative initiatives are planned.

The Strategy recognizes that methane emissions are difficult to monitor. Data on emissions from various sources according to different methods may give estimates which vary by a factor of 2. It means that data based on a priori knowledge of the emissions contrasts with direct measurements of methane emissions. For these reasons, the document gives quite a flexible timetable for industries to propose concrete measures. Industries have until 2025 to declare their measures. The core focus is on the natural gas industry which is held responsible for more than 80% of man-made methane emissions.

The strategy also announces efforts by the EU to ensure international cooperation in reducing emissions. “As the largest importer of oil and gas, the EU has the leverage to promote energy-related methane emission reductions globally,” says the Commission. “Estimates show that the external carbon or methane emissions associated with EU fossil gas consumption (i.e. the emissions released outside the EU to produce and deliver fossil gas to the EU) are between three to eight times the quantity of emissions occurring within the EU. The Commission therefore intends to mobilise a coalition of key import countries to coordinate efforts on energy sector methane emissions.”

Why are accurate measurements so difficult?

Methane has been recognised as a powerful greenhouse gas with a bigger warming effect than carbon dioxide. Methane emissions constitute about one quarter of anthropogenic causes for climate change. At the same time, unlike carbon dioxide, methane dissipates over a couple of decades and therefore doesn’t accumulate in the atmosphere.

Methane emissions are quite ubiquitous in nature and non-anthropogenic sources remain difficult to estimate with accuracy. Man-made methane emissions come from a variety of source, ranging from agriculture to all hydrocarbon sectors. In oil and gas methane emissions can occur from a wide range of locations (transmission, distribution, underground storages, compressor stations). Some methane emissions can be classified as unavoidable, for example emissions from abandoned production wells which continue for a while even after their phase out. Thus, even halting the extraction of fossil fuels may be counterproductive in some cases in terms of methane emissions.

Despite difficulties in estimates, satellite data on methane emissions have progressively evolved in recent years. Columbia University’s Center for Global Energy Policy in New York and energy consultancy TNO in the Netherlands published a paper in October announcing that “the availability of new satellite detection systems, together with existing airborne and ground monitoring systems, will provide a much more accurate picture of methane emissions over the next five years.”

Yet, satellite estimates don’t allow a distinction between normal – or unavoidable – emissions from those which can be mitigated. Overall, sources of emissions are usually subdivided between vented, fugitive and flared. Vented emissions are produced through a controlled and intentional release of methane during oil and gas production process, as well as from pipeline purging. Fugitive, or leaked, emissions, fall beyond human control. Flared hydrocarbon gases mostly lead to carbon dioxide emissions, with some methane emissions occurring when gases are not entirely destroyed during the combustion process. It might be worth noting that gas flaring occurs mostly outside of the gas sector, as it is done mostly by small oil companies that burn unwanted gases.

Gas flaring and gas venting became widespread practices across oil and gas production as producers tended to optimise their extractions from less useful or less commercially attractive hydrocarbons. As gas flaring is based on combustion, it mostly generates  carbon dioxide emissions, globally amounting to 400 mt per year, a figure equivalent to annual emissions of the UK.

Without doubt, scholars often emphasise that the potential role of gas flaring reduction has been rather underestimated in the current policy debates. In addition to carbon dioxide emissions, gas flaring releases unburned methane into the atmosphere. The World Bank notes that it remains difficult to account for methane emissions from gas flaring activities worldwide. They estimate that the volume of methane emissions is about 5% of the flared gas. A recent study estimated that offshore platforms in the North Sea lose an average of 0.13% of methane from gas production volumes during the gas flaring process.

Meanwhile gas flaring persists as a major practice across oil producing states. A recent report of the World  Bank Global Gas Flaring Reduction Partnership reveals that flared volumes have grown by an additional 5 bcm over the last five years. Figure 1 illustrates dynamics among the top five gas flaring producers and reveals a persistent increase everywhere apart from Iran, which has seen a sharp decline in flaring since 2018 when the US imposed sanctions on Iranian crude imports. 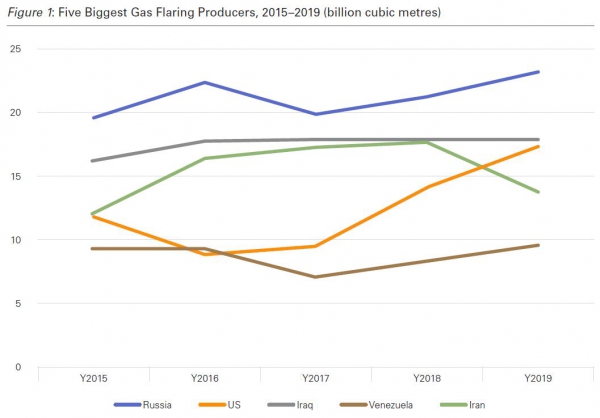 The World Bank data reveals that Russia still leads in the global gas flaring volumes. Russian regulation on gas flaring reduction has been rather ambitious, but despite the penalties imposed on the practice, smaller oil producers often prefer to flare rather than to introduce capital-intensive mechanisms for either reutilisation or reinjection of associated gases into the wells.

The figure also clearly illustrates a sharp increase of gas flaring in the US. The associated gas boom that accompanied the US shale oil revolution drove American hub prices to bargain-basement levels. Flaring is a more attractive solution for businesses amid low prices.

Gas flaring abatement in the North Sea might serve as a counter-example of negative practices. An earlier study conducted by the UK regulatory authorities reveals discrepancies ‘in apparent average flaring rates’ at individual fields. The report concludes that gas reinjection increased proportionally to the flaring decline, but the issue hasn’t been entirely resolved.

In the Caspian Sea, Azerbaijan and Kazakhstan have been considered as success stories in reducing gas flaring rates. Meanwhile, a report conducted by the European Bank for Reconstruction and Development (EBRD) reveals that continuing flaring practice is caused by lacking infrastructure for remote producers (Kazakhstan), gas re-injection plant being off-line or with reduced capacity (Azerbaijan).

Transmission and distribution: difficulties in monitoring

Adding to that, piped gas is usually connected to underground storages, which are usually built on natural underground wells and serve to increase the system’s reliability. Underground storages usually produce both fugitive and vented methane emissions. Operators often point out that emissions remain difficult to estimate precisely since various detection methods compete. 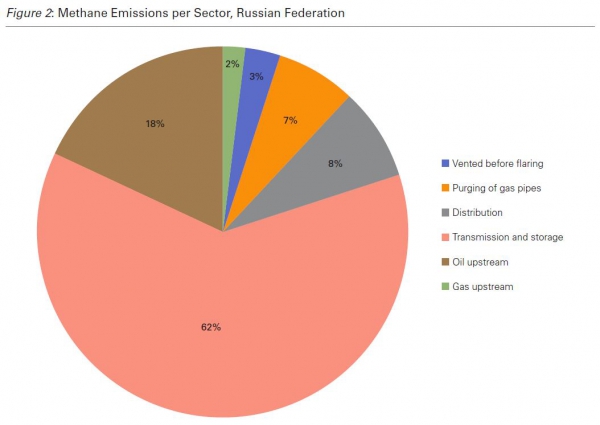 According to the EBRD, the former Soviet Union, which hosts the world largest pipeline-storage infrastructure, tops the global methane emissions ranking in energy sectors (methane emissions from the agriculture sector would give a different geographic distribution of sources).

The EBRD estimates that some 60 bcm of methane leaks to the atmosphere in the region covered by the bank. Among these, the EU’s largest gas supplier, Russia, represents an interesting case. Russia’s gas exports are monopolized by Gazprom, which has been formally unbundled from domestic distribution and operates independently from Russia’s oil sector. National data from Russia reveal that most of the methane emissions occur in transmission and storage, while up to 17% of emissions is attributed to the industry and quite a significant share of fugitive emissions comes from the gas distribution level operated by local utilities (Fig 2).

Choosing between pipeline and LNG

The LNG revolution has opened up pathways to more efficient gas transportation and even direct use of gas in a cryogenic form leading to lower nitrogen and sulphur emissions. Yet, some earlier studies estimated that pipeline gas generates less greenhouse gas emissions than LNG. The argument is often backed by reference to the carbon footprint from purification and liquefaction.

However, if we consider solely methane emissions, then LNG suppliers might be in a better position. Although part of the methane is lost during the purification and liquefaction process, it can also be captured and re-injected back to the grid. This enables the LNG supplier to optimise its methane emissions footprint.

An interesting comparison between LNG and piped gas emissions was earlier presented by WWF Russia. It concludes that if a pipeline is longer than 7,800 km, the aggregated carbon and methane emissions together become significantly higher than transporting natural gas in liquefied form by tankers. By contrast, for distances shorter than 1,400km, transport by gas pipelines is superior in terms of overall carbon footprint. The same report explicitly indicates difficulties in monitoring and in estimating methane emissions while comparing various modes of gas transportation.

It is difficult to estimate the effects the broadly-worded Methane Strategy will have on the European gas market.

Three categories of companies may be identified as responsible for the methane emissions. The first category are the European companies who can easily be supervised by the EU and national regulations. The second category are non-EU suppliers to European gas markets, who might be interested in demonstrating that they are taking measures to reduce their environmental footprint. Some form of ‘guarantees of origin’ scheme could be devised that would allow or require suppliers to meet certain standards.

A third category comprises companies that emit methane emissions but don’t have any access to European markets. Considering gas flaring practices in the Caspian Sea, Russia and the US, many companies are not affected at all by European regulations or market dynamics.

Given this rather large third category, a large part of global methane emissions risks staying out of the European regulatory scope. Companies of the second category might be able to provide good guarantees of origins while their national peers would continue to worsen their environmental footprint. At the same time, individual gas exporters to international markets – e.g. LNG exporters from the US and Russia, as well as Gazprom – are rarely involved in gas flaring itself which is mostly practiced by smaller enterprises unable to commercialise gas condensates.

The question is whether the EU has any means of influencing methane emissions from this third category. Indirectly, a market for guarantees of origin could stimulate category 2 companies which in turn might have an impact on category 3 companies, but this is speculative. Some advocate a EU-wide system of gas origins in which some connection is made between category 2 and category 3 companies, but this is hard to realise from a regulatory perspective. Currently there seems to be no way how the EU’s Methane Strategy can make non-EU gas suppliers accountable for gas flaring and methane emissions.