Equinor’s new CEO Anders Opedal, who succeeded Eldar Saetre November 2, has plenty to think about. The Norwegian company’s earnings have taken a hit this year owing lower oil and gas prices, forcing it to slash dividends and continue focusing on cost and spending reductions.

Favourable tax reforms granted by the Norwegian government to the domestic petroleum industry have offered a lifeline, but there is no doubt that the challenges are piling up for Europe’s second largest gas producer.

Drilling and exploration activity on the Norwegian continental shelf (NCS) has slowed down this year thanks to cancellations and postponements on the back of the Covid-19 pandemic. Activity will likely remain subdued until oil and gas prices have recovered substantially, even if break-even costs are low. 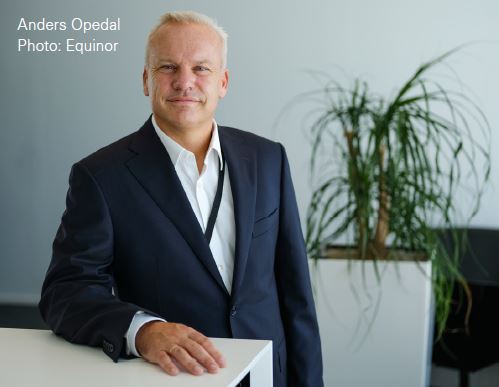 “Gas production on the NCS is still profitable as the operational costs are close to zero. Equinor also has a great deal of supply flexibility so it can hold back volumes when prices are low. But the company’s appetite for developing new fields will be somewhat lower in the current price environment,” Danske Bank’s head of Norwegian equity research Christian Yggeseth told NGW.

All eyes on the new management

Opedal joined Equinor as a petroleum engineer in 1997, having been executive vice president for technology, projects and drilling. Saetre, who had been with the company for 40 years, the last six as CEO, has already laid down some of the early stages of the transition, most obviously by changing the company name so it no longer refers to oil.

Yet Opedal - the first engineer to become Equinor’s CEO - faces an enormous challenge in transforming the company and making the state-owned major fit for the energy transition.

Equinor hasspelt out its goal to produce less oil and gas in the future, so growth will have to come from other areas. Ithas pledged to become carbon neutral by 2050 which means the company will have to invest more in green technologies such as offshore wind, hydrogen and carbon capture, sequestration and use (CCUS).

Yet timing could be on Opedal’s side. Unconventional ‘green’ investments might be easier to justify to shareholders when oil and gas assets yield lower returns than in the past.

Equinor is, for example, already flexing muscles in the offshore wind segment. Together with Scottish & Southern Energy, it is building the 3.6-GW Dogger Bank project off northeast England, which will be the world’s largest. The company has also announced plans to develop major wind farms offshore Japan and Poland.

Equinor also looks well positioned in the US where it recently sold a 50% stake in its Empire Wind project offshore Long Island and Beacon Wind off the coast of Massachusetts to another European company that is reinventing itself: the UK major BP.

“Going forward I think it is going to be a buyers’ market in the oil and gas segment and a sellers’ market in the renewables segment,” Equinor’s CFO Lars Christian Bacher told analysts October 29. Bacher has since stepped down as CFO and will leave the company in May next year after 30 years’ service.

CCS anddecarbonised gases represent another growth area.Northern Lights is Equinor’s flagship CCS project which it is developing in partnership with Shell and Total. It is the transport and storage leg of the ‘Longboat’ CCS project which has been promised Nkr 16.6bn ($1.7bn) from the Norwegian state and which could be operational by 2024. The project involves capturing CO2 at Norcem’s cement factory in the Oslo area and from a waste incineration plant.

The CO2 will be transported by ship to the Norwegian west coast where it will be pumped through pipelines to a saline aquifer reservoir under the seabed and near the Troll fields.

Equinor is also betting on blue hydrogen. It is heading up the Hydrogen to Humber Saltend project near Hull in the UK where it plans to produce hydrogen from natural gas by utilising CCS from 2026.

"Oil and gas will remain the core part of Equinor's business profile at least until 2030. At the same time, the company's investments in green technologies are very real. They are investing billions of dollars into offshore wind projects such as Dogger Bank. These projects have a long lead time and will not generate cash flows yet but they illustrate the shift in Equinor's business mix," Moody’s Investor Service senior analyst Sven Reinke told NGW.

The fire at the Hammerfest LNG terminal in September was a set-back for the company. The incident is being investigated by the police, assisted by the Norwegian Petroleum Safety Authority which before the incident had warned Equinor about inadequate accident preparedness.

The repair works could take up to a year to complete. Nevertheless, the company should have enough spare capacity -- for example from its giant Troll field in the North Sea -- to take advantage of a post-Covid upturn in gas prices.

"Our view is that oil and gas prices will recover, the question is how quickly. Gas prices were already weak pre-Covid but they will rebound in the medium term and Equinor is well positioned to capitalise on that. The company already started reducing production levels in the second half of 2019 so they have the flexibility to ramp up," said Reinke.

Bacher also echoed this view during the analyst call. “If gas prices in the fourth quarter [recover] then we have capacity both from a production point of view but also from a quota point of view to take advantage of that situation to create superior value,” he said.

Equinor’s international portfolio is heavily geared towards oil with the notable exception of the US shale gas industry where the company is a significant player. Historically, its US operations have been marred with controversy as acquisitions and investments were based on oil prices above $100/barrel.

Lower-than-expected oil and gas prices meant that the company recorded an accounting loss of $21.5bn on its US activities between 2007 and 2019. Of that, $9.2bn were due to impairments of onshore assets, $4bn to impairments of the offshore portfolio, and $4bn were written off as unsuccessful exploration activities, according to a recent report by PwC. The remaining loss was mainly related to commercial contracts and internal financing costs. Equinor sold its stake in the Eagle Ford shale play to Spanish producer Repsol in November last year.

Equinor’s onshore gas activities are mainly focused on the Marcellus and Utica formations in the Appalachian Basin, in the northeast. It has halted drilling in the Marcellus play, in line with its strategy to cut spending. However, low operational costs means the asset is still profitable despite the low-price environment, said Yggeseth.

“The Marcellus shale play has been a good investment for Equinor. Although US gas prices are relatively low, the breakeven price for Marcellus is even lower,” he said.

US universities get funding to probe hydrogen for energy