Equatorial Guinea began producing oil in 1995, but it was not able to ride the crude wave for long. Instead, it saw production peak in 2004, less than a decade after oil began flowing from Zafiro, an offshore field within the Block B licence area.

Even so, the country has been able to maintain a position in the global hydrocarbon industry. It did so first by shifting the focus of development operations at Alba, an offshore field that Marathon Oil brought on stream in 1991, from gas condensate to natural gas, and then using the gas to support the establishment of the EG LNG gas liquefaction plant and petrochemical complex at Punta Europa on Bioko Island. 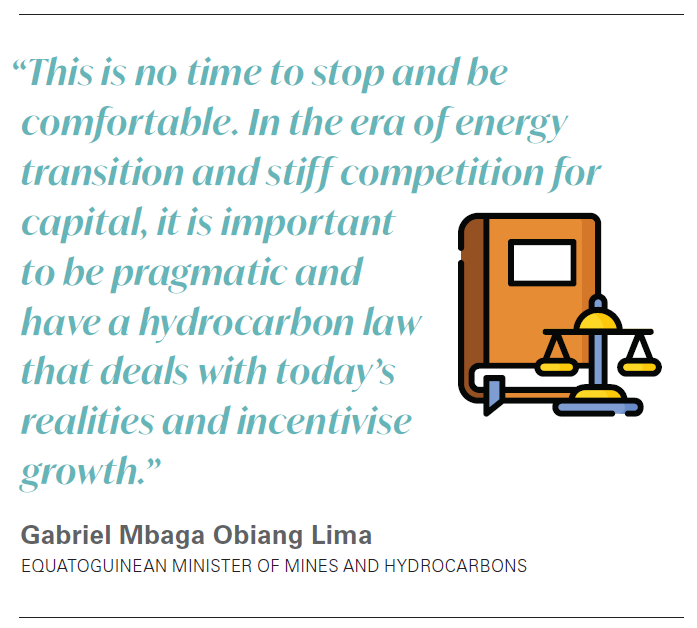 And then in 2018, Equatorial Guinea took pre-emptive action in the face of forecasts showing that production at Alba was set to peak within the next few years. It unveiled a plan for the establishment of a larger gas complex – a Mega Gas Hub (MGH) capable of handling production from local fields, as well as offshore deposits belonging to neighbouring countries such as Nigeria and Cameroon.

To support the first phase of the hub project, it struck a deal with US firm Noble Energy in 2019 for the development of the Alen gas monetisation project, which will serve as a new source of feedstock for EG LNG and the other facilities in Punta Europa.  At the same time, it took steps to boost overall production levels through the “backfill” development of other offshore fields.

Now the country is trying to push forward with preparations for the second phase of the MGH, which envisions the establishment of gas transportation networks serving fields near the boundaries of Equatorial Guinea’s offshore zone, including Nigerian, Cameroonian and cross-border sites. According to Equatoguinean minister of mines and hydrocarbons Gabriel Mbaga Obiang Lima, this plan has the potential to enable the development of multiple stranded assets that are too distant from existing infrastructure networks to make development viable.

In an online presentation aired during a webinar in mid-September, Lima indicated that Malabo had even broader ambitions for the MGH project. The new hub will allow Equatorial Guinea to position itself as a leading player in the regional gas sector, he said. It will also promote economic growth in the region and support the transition to cleaner fuels.

These are lofty goals, but they may not be easy to achieve. The MGH is likely to encounter challenges going forward, in both the first and second phases of execution.

One of the main challenges of the first phase will be maintaining domestic gas production at levels that “keep all Punta Europa facilities operating at capacity for the foreseeable future,” in the words of Marathon’s website.

On the positive side, as noted above, the Alen project, which came on stream in February 2021, will help on this front. It provides for Noble, now owned by US major Chevron, to extract gas from Alen rather than re-injecting it to maintain pressure in the field’s condensate reservoir, and transport it via a new pipeline to EG LNG’s plant in Punta Europa. Additionally, it calls for these volumes to be supplemented by additional production from the sites slated for backfill development. 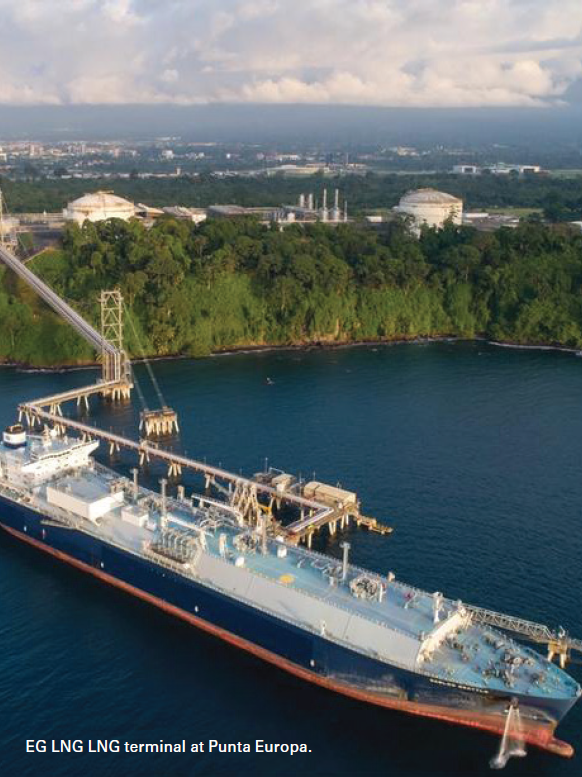 However, these efforts may not be sufficient, according to David Thomson, the vice president of sub-Saharan Africa research at Houston-based Welligence Energy Analytics. Thomson noted in a recent message to NGW that Equatorial Guinea’s gas production currently stands at around 650-700mn ft3 (18.4-19.8mn m3)/day, equivalent to about 237.3-255.5bn ft3 (6.7-7.2bn m3)/year, and was not likely to recover. Yields are “expected to decline going forward,” he said.

Output levels are not likely to get a boost from any new discoveries, he added, as Equatorial Guinea is not expecting to bring more undeveloped sites on stream in the foreseeable future. “There is…little sign of appetite for full greenfield developments,” he remarked.

He did not comment on the status of proposals for new development projects such as Fortuna, a section of Block EG-27 awarded to Russia’s Lukoil in Equatorial Guinea’s 2019 bidding round. Nor did he mention previous proposals for using tie-backs to link the Asend, Carla, Carmen and Diega sections of Blocks O and I to nearby production facilities at the Alen field. (IHS Markit has suggested that these sites could be developed easily and cheaply, at a cost of about $1.50/’000 m3, via a tie-back system.)

Indeed, Thomson also raised questions about the effectiveness of the Alen initiative, saying: “A further phase of the Alen gas project is believed to be progressing, but its scope and timeframe is unclear.”

He did not elaborate, but it is worth noting that IHS Markit has indicated that it views the project as a temporary fix. The Alen scheme “will help maintain feedstock to the EG LNG facility until the mid-2020s, but longer-term supply stability is still uncertain,” the consultancy said.

For his part, Thomson noted that Malabo did recognise the importance of securing new sources of gas production. Equatorial Guinea “is working on gas incentives as part of its mega-hub plan, and these are expected in 2022,” he said. “The changes will be focused on helping to backfill supply to Punta Europa.”

He was referring to Lima’s statement during the webinar that the Equatoguinean government was drawing up a new hydrocarbon law for the country. During his presentation, the minister said that Malabo wanted to establish incentives for development of gas fields and other upstream assets.

“This is no time to stop and be comfortable. In the era of energy transition and stiff competition for capital, it is important to be pragmatic and have a hydrocarbon law that deals with today’s realities and incentivise growth,” he remarked. “We have to be more competitive, cut red tape, promote free markets, balance local content, create more jobs and increase our tax base.”

He also said he intended to reveal further details about the proposed law during the African Energy Week (AEW) conference in Cape Town in November and at the US-African Energy Forum in Houston the following month.

Lima’s announcement drew praise in late September from NJ Ayuk, the executive chairman of the African Energy Chamber (AEC), the sponsor of the AEW conference. “We’ve made a case for the importance of strategic fiscal policies, from revised production-sharing contract (PSC) requirements to reduced tax and royalty requirements. Some have been critical of us for advocating this. I disagree with them, and I still love them, but resource nationalism is not the way to go and it is actually dangerous for Africa. Equatorial Guinea taking the lead to make reforms is a step in the right direction,” Ayuk said. “I truly believe that these changes are necessary to give IOCs an incentive to explore in Equatorial Guinea during the current downturn. But we can’t stop there. We need to consider other pain points that discourage foreign operations in Africa and find ways to eliminate those challenges as well.”

Ayuk’s mention of barriers to foreign operations in Africa is apropos, given that the second phase of Equatorial Guinea’s MGH project will face challenges on this front.

As noted above, the second phase of the hub initiative aims to extend the country’s reach beyond its own borders by making Punta Europa a hub capable of supporting upstream development in nearby countries. For multiple reasons, however, this will not be an easy task.

According to Thomson, there will probably be legal, diplomatic and logistical hurdles to the MGH plan. “Potentially, we will see stranded Nigerian and Cameroonian gas fields developed as part of the hub. Yolanda in Cameroon is a prime candidate,” he remarked. “But cross-border agreements are tricky, and Nigeria is also facing supply pressures for its NLNG [Nigeria LNG] project and its own domestic market.”

Energy Capital & Power, formerly known as Africa Oil & Power (AOP), has gone into further detail about these challenges. In an article published in January 2020, the energy investment platform pointed out that Equatorial Guinea would have to work to establish more common ground with its neighbors before forging ahead with cross-border gas transfers.

“Nigeria does not belong to OHADA [Organisation pour l'harmonisation en Afrique du droit des affaires, a group of 17 African states that have worked to harmonise their corporate legal regimes and supporting institutions] and operates under a different legal regime than that of Equatorial Guinea and Cameroon,” the article explained. “The three countries also have different petroleum legislations, fiscal regimes and PSC terms. These are all factors that need to be addressed to turn vision into reality.”

If these hurdles can be surmounted, however, Equatorial Guinea will be able to make an argument for adopting regional rather than national frameworks to support the development of offshore African gas fields. It will also be able to bolster its case by pointing out that a regional gas hub might bring operating costs down to levels more favorable than existing options such as floating production, storage and off-loading units, Thomson said. “Utilising existing infrastructure has cost and time advantages over deploying new kit,” he told NGW.