Eni’s CEO has held one of its regular meetings with Libyan government officials over the weekend.

Claudio Descalzi met Libyan Prime Minister Fayez Sarraj November 3 in the capital Tripoli (both pictured below, courtesy of Eni, with Descalzi on left). The two have met at least annually since 2016. Descalzi also met state producer NOC’s chairman Mustafa Sanalla whom he previously met last month when Eni, BP and NOC an agreement to restart exploration activities “during 1H2019”.

In a statement, Eni said it has provided “technical assistance activities for the maintenance of some power plants in the region around Tripoli” to show its support to the country, and that “Eni is the main supplier of gas for power generation to the local Libyan market destined entirely to fuel country's power plants, with an electricity generation capacity of over 3 gigawatts.”

Descalzi told his hosts that, at the Eni-run Bahr Essalam phase 2 offshore gas project which started up in July, tie-in activities of the remaining seven wells continues with their completion due by end-2018.

Progress of a compression capacity upgrading project at the Wafa plant was also mentioned, with the first gas expected to come on stream during the next few days. Eni said this was a “clear indication that relevant projects can be successfully implemented even in remote onshore areas” in Libya.

Sanalla and Descalzi also discussed development of the A & E offshore gas facilities, a tender for the engineering study of which is expected to be launched shortly. Once developed, this should extend the gas production plateau from Libya’s offshore – enabling it to save money on liquid fuel imports. Eni is Libya’s largest foreign net equity producer at 280,000 barrels of oil equivalent per day. 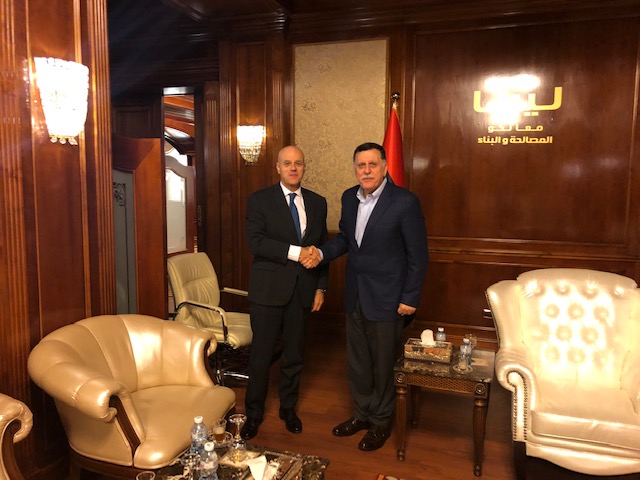