Few could have predicted the dramatic escalation of natural gas prices in Europe over recent weeks and months, which briefly saw the November delivery contract at the Dutch TTF gas hub touch nearly $2,000/’000 m3 on October 6.

Globally, the gas market has tightened significantly since the summer, owing to a surge in demand in China and other Asian markets, as well as various outages at liquefaction plants and other sources of supply. In the past, Asian power generators switching from gas to oil fuels when prices are high has helped to keep those prices in check.

"What we've discovered is that the LNG market no longer has a ceiling, because Asian buyers are no longer automatically switching to oil when LNG goes above the oil parity price as they did in the past," Laurent Ruseckas, gas expert at IHS Markit, tells NGW.

Europe has been hit hardest by the supply crunch, partly because the premium gas price offered in Asia has attracted LNG cargoes that would otherwise have gone to European terminals. Wind turbine output in Europe has also been unusually weak this year, putting more pressure on gas to balance the grid. And high prices during the summer compelled companies from storing gas for winter as they would have done in a typical year. These factors have come together to create a perfect storm, which has led energy suppliers to declare bankruptcy and gas-dependent industries to close their doors, seriously undermining the post-coronavirus recovery.

Russia’s Gazprom has also been thrust into the limelight during the crisis. It stands accused by many European politicians of withholding supply – whether simply to drive up prices or to coerce the EU into accepting Nord Stream 2’s launch. The physical constraints on Gazprom’s production capacity, following a fire that broke out at a major gas processing plant in Western Siberia in early August, are unclear.

A group of 40 European Parliament lawmakers (MEPs), mainly from Poland and the Baltic States, filed a letter to the European Commission in mid-September, asking it to launch a probe into Gazprom’s alleged manipulation of gas prices. The commission said on October 13 it would investigate possible anti-competitive behaviour on the energy market, without divulging details.

“Russia is taking the blame mostly because it is a convenient scapegoat that happens to have about a 40% share of the European gas market,” Ronald Smith, analyst at Moscow-based brokerage BCS Global Markets, tells NGW.

For its part, Russia has hinted it is ready to increase flow. On October 13, Russian president Vladimir Putin said Moscow was ready to work with European partners to ease the current crisis. Gazprom is complying with its contractual supply obligations, though, and it is unclear how much extra gas it could deliver to the market, given that its production so far this year is already higher than in the same period of 2019, before the pandemic.

“Gazprom is running near sustainable capacity right now,” Smith says. “Its ability to provide extra gas at auction later this fall – once Russian storage refill is completed – will depend heavily upon Russian weather. A warm fall would free up gas for export. A cold fall means no excess supply.”

Smith says Gazprom has largely overcome supply issues relating to the August fire at its processing plant, although its liquids production could take another year and a half to be restored.

Ruseckas believes it is commonly assumed that Gazprom has more excess production capacity than it actually has. Its spare capacity is often limited in winter, and it has also been affected by the delay of upstream investments last year in response to the pandemic. What is more, Gazprom has been diverting more investment in recent years to Eastern Siberia, where it is developing fields to deliver gas to China via the Power of Siberia pipeline.

Gazprom has by and large been a reliable supplier to Europe over the years, and the perception that it can single-handedly dictate prices in Europe is also flawed, Ruskeckas says.

“There’s been this assumption over the years that Gazprom has some incredible pricing power that it can use for economic and political purposes, but this has not typically been the case,” he says. “Whenever the LNG market is balanced or loose, it is just not true."

The crisis should also be seen as the culmination of years of European policy decisions. EU authorities have steadily worked towards liberalising gas pricing, shifting away from long-term contracts and oil indexation and towards spot sales and gas-on-gas pricing. A lengthy anti-trust case against Gazprom even forced the company to introduce more hub-based pricing in its contracts. Gazprom and other suppliers have long urged against moving away from oil indexation and long-term contracts, warning about the volatility it can bring about. 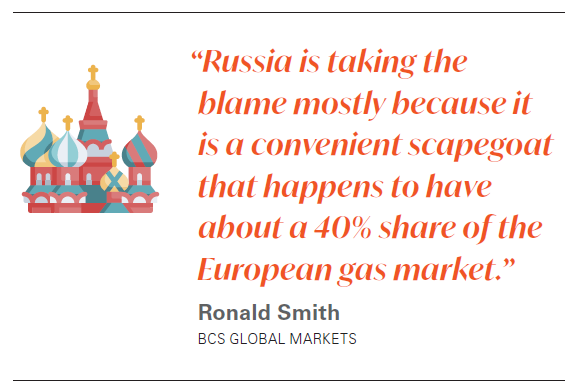 "Europe brought this on itself by liberalising the market," Ruseckas says. "That step brought incredibly low prices for consumers in the past, but sometimes supply and demand go in the opposite directions and you end up with incredibly high prices."

Notably, the EU began its push to liberalise gas markets when its own indigenous gas supply was far higher. In the last decade alone, European output excluding contributions from Russia and other CIS states has dropped almost 30%, coming to under 219bn m3 last year, according to BP’s latest statistical review of energy.

The Netherlands is due to close next year what was once Europe’s biggest source of gas supply, the Groningen field, which only five years ago was flowing nearly 30bn m3 annually. Its supply has been capped at just 3.9bn m3 in the current gas year, and the government has refused to alter the plan to ease supply shortages. The field was due to continue pumping gas until 2030 under the original closure plan, but this deadline was brought forward to 2022.

Meanwhile, investment in new gas supply in the Netherlands has been stifled by a controversial ruling on nitrogen emissions, which has put billions of dollars of new projects on hold in the gas industry and other sectors.

In the UK, gas production has fallen dramatically in the last decade and a half. From self-sufficiency in 2004, the country now relies on imports to cover half of its gas demand. It is impossible to say whether onshore shale gas development might have reversed this trend. In any case, mounting local opposition to hydraulic fracturing and eventually a moratorium imposed by the government on the technique’s use in 2019 put an end to the ambitions of UK shale drillers.

Denmark has also reduced its contribution to European gas supply after closing down its largest field Tyra in 2019 so that an extensive renovation project could go ahead. The field’s restart was delayed by a year until 2023 because of coronavirus restrictions at Asian fabrication yards.

Future prospects for Danish gas look dim, after the country’s government and parliament agreed late last year to end oil and gas exploration, while cancelling a licensing round that was already underway.

Norway, Europe’s second-largest gas supplier, has no such plans to stop searching for new gas fields. But its own production has been impacted by a lengthy outage at the Hammerfest LNG plant following a fire in September last year. The plant’s restart had been scheduled for this month, which would have helped ease the supply crunch, but was delayed until March 2022.

Meanwhile, gas development in the Romanian Black Sea has been undermined by controversial changes to the country’s offshore law in late 2018, which developers say has made projects uneconomic. For that reason, OMV Petrom and ExxonMobil have repeatedly delayed taking a final investment decision (FID) on their 84bn-m3 Neptun Deep field.

Lessons from the crisis

While gas production has declined over the years, Europe has rapidly increased deployment of wind and solar energy. But the intermittency of this power supply puts a strain on the system.

“Intermittent power generation needs substantial alternative generation sources on permanent standby,” Smith says. “Europe should be building more gas-fired plants now if it will insist on shutting down coal and nuclear in favour of yet more wind and solar.”

“In reality, nuclear power should have a renaissance in the European power mix,” he continues, “and some European politicians are beginning to take this position.”

Europe also needs more of its own gas supply, he says.

“The European energy sector is increasingly subject to externalities,” Dmitry Marinchenko, at Fitch Ratings, tells NGW. “This is because it is becoming increasingly reliant on LNG and renewables, rising geopolitical risks and a lower supply cushion.”

While in the long term more investment in renewables will make Europe more self-sufficient, other more stable sources of power are still needed until the intermittency issue has been resolved, Marinchenko says.

“For now, traditional baseload power plants are adding stability to the energy system and cannot be avoided altogether,” he says.

The expert notes that gas and power prices will remain volatile, and so market participants will need to hedge. He also calls into question LNG’s flexibility as an energy source.

“LNG may not be as flexible as once hoped given potential supply bottlenecks and huge competition when the market is tight,” he says. “Long-term contracts will continue to prevail in the industry.”

The European Commission has so far rejected criticism that the EU’s own policies are to blame for the crisis, although it has proposed some potentially useful measures, such as the creation of a strategic gas reserve, to avoid future supply crunches. But on October 6, energy commissioner Kadri Simson told the European parliament that the present situation was the result of overdependence on hydrocarbons, rather than increased renewables.

“The current price hike has little to do with our climate policies and much to do with our dependence on imported fossil fuels and their volatile prices,” she said.

The commission argues that accelerating the energy transition is the best means of avoiding future crises.

“High prices need to impact policy makers’ thinking and that has not happened yet,” Thierry Bros, professor at Sciences Po Paris, tells NGW. “Once that happens, the gas narrative will get stronger and then FIDs on new production can go ahead.”

He expects to see “a winter of energy discontent” before European gas producers start committing to new projects in 2022.