Energy Cooperation in the History of Turkish-Russian Relations

Since World War II, Russia and Turkey have been actively engaged in economic relations. The degree of cooperation has evolved as the trust between these two countries has developed. Okan YARDIMCI, a well known expert, analyzed the intergovernmental agreements, meeting notes and letters between Turkey and Russia for his recent study: “Energy Cooperation in the History of Turkish-Russian Relations”. The report examines the history of this relationship in four periods: the Soviet Union period, from 1992-2001, from 2002-2009, and from 2010-2015. Here is the summary:

i) Before the dissolution of the Soviet Union: from cooperation in industrial construction to the first natural gas deal

The construction of the Arpacay Dam; cooperation in the expansion of the Iskenderun Iron and Steel Plant; the construction of the Orhaneli Thermal Power Plant; and the expansion of the Seydisehir Aluminium Plant are some of the earliest and most prominent attempts at cooperation. Under these agreements, the USSR supplied Turkey with the necessary expertise, equipment, materials, and technical services for its industrial development. The financial value of the USSR’s support was considered a debt incurred by Turkey. For example, the USSR supplied $200 million to fund the expansion of the Seydisehir Aluminium Plant, under the condition of a 5% yearly interest rate over a 10-year repayment period.

In those years, Turkey made a significant portion of its payments to the USSR in Turkish goods (via the barter system) instead of cash. The goods were often industrial products, such as aluminum and iron, or agricultural products.

This rudimentary economical and industrial collaboration led the parties to cooperation in more substantive energy projects. According to official documents, Turkey was the first party to declare its intention to sign a natural gas agreement. The Soviet party agreed to undertake a feasibility study related to Turkey's interest in purchasing natural gas. The two parties signed an agreement in Ankara on September 18, 1984, stipulating conditions for the supply of natural gas from the USSR to Turkey. According to this intergovernmental agreement:

This natural gas agreement was an important step for the two parties, and they started to discuss cooperation in other areas of the energy market. On December 26, 1984, the parties signed an agreement regarding scientific and technical cooperation. The first provision of this agreement was cooperation from 1985-1986 in scientific studies on alternative and renewable energy sources. After a few years, in 1988, the countries recognized “wind and solar energy” as a spesific area of cooperation. Yet these progressive attempts were unsuccessful due to political tensions in the USSR.

The parties also made an agreement on July 28, 1986, for cooperation between their State Planning Organizations. This was another important step in the countries’ bilateral relations and comprehensive natural gas deals.

During the construction of the pipeline from the USSR to the western region of Turkey (a.k.a. the Western Line) through Romania and Bulgaria; Turkey sought another pipeline, this one extending from the Soviet Transcaucasian region to the eastern region of Turkey (a.k.a. the Eastern Line). The two parties discussed this project during the ninth Turk-Soviet Economic Cooperation meeting held on November 21, 1986, in Moscow. This pipeline project was not started during the Soviet period, however. Azerbaijan proclaimed its independence in October 1991, before the official dissolution of the USSR, and the Eastern Line was accordingly only realized after a twenty-year lag. It came to be called the South Caucasus Pipeline. This pipeline ran through the territories of Azerbaijan, Georgia, and Turkey, and became operational at the end of 2006. It offers additional gas supplies to Turkey and the European market from the Shah Deniz gas field.

ii) 1992-2001: from the early days of the Russian Federation to the liberalization of the Turkish natural gas market

After the dissolution of the USSR, the Russian Federation assumed the Soviet Union's rights and obligations and was recognised as its continued legal entity. Russia’s Foreign Economy Minister Pyotr Aven sent a letter to Turkey on May 14, 1992, regarding the permanence of the rights and obligations of the parties in regard to their intergovernmental natural gas agreement. The terms reflected changes consistent with Russia’s new legal status, though the fundamental provisions remained the same.

On May 14, 1992, the parties signed an agreement regarding the founding of a Turk-Russian Economic Commission. The first meeting of the commission was held from November 2-6, 1992, in Ankara. The parties discussed increasing the yearly natural gas flow from Russia to Turkey from 5-6 billion m3 to 7-8 billion m3. This represented an increase over the amount allowed under the first agreement. While the parties did not ultimately agree on the increase of 2 billion m3; a new contract was signed on December 10, 1996, between the Turkish state-owned company, BOTAS, and the Russian state-owned company, GAZEXPORT, for an additional 8 billion m3 (through the existing pipeline: Ukraine-Moldova-Romania-Bulgaria route).

This second natural gas agreement was different from the first one because it was not an intergovernmental agreement. For the operation of the sale, two aforementioned state-owned companies and one additional Turkish company combined to form a new company named Turusgaz.

The most significant difference during this period and the Soviet Union period was the method of repaying debts. The parties abandoned the barter system in relation to the natural gas trade, and this was reflected the contract provisions.

Starting in the mid-1990s, the borrower party became the Russian Federation.  On December 15, 1995, Turkey and Russia signed a credit agreement for Turkey's investments in Russia.

In the following years, Turkey’s domestic demand for natural gas led to strong cooperation between the two regional powers. Turkey and Russia agreed to build a direct natural gas pipeline from Russia to Turkey through the Black Sea in 1997; this project came to be known as the Blue Stream Project. The initial agreement was signed by the Energy Ministry of Turkey and the Russian state-owned company RAO Gazprom on August 29, 1997. According to the project plans, the Russian company Gazprom and the Italian company ENI would jointly build a pipeline with a length of about 1213 km running under the Black Sea and reaching the city of Samsun. Turkey would build a pipeline from Samsun to Ankara, as well as an Ankara-based distribution center.

Russia was to sell natural gas to Turkey beginning in 2000 through the direct pipeline under the Black Sea,

the length of the agreement was to be 25 years (with an additional 5 years auto-renewal at the end of the period),

the reexportation of natural gas was not to be allowed without the permission of Russia.

With the Blue Stream Project, Turkey became the second-largest importer of Russian gas after Germany.

The parties talked about cooperation in nuclear energy for the first time during the third Turk-Russian Economic Commission meeting on November 7, 1997.  After just a month, on the same day of the Blue Stream agreement, the parties signed another intergovernmental agreement regarding cooperation in the energy market, this time emphasizing their desire to cooperate on nuclear energy.

Even though Turkey pushed for the payment of new natural gas agreements with the provision of additional goods, the barter system was not reflected in the Turusgaz contract or the Blue Stream intergovernmental agreement.

In this period, the substantive energy projects remained under the management of state-owned companies during this period.

Turkey passed the liberal Natural Gas Market Law on May 2, 2001. This law aimed to change the BOTAS’s integrated position in the Turkish energy market. According to the law, BOTAS’s wholesale share in the Turkish market had to decrease to 20% in a certain period of time; moreover, BOTAS had to surrender its existing contracts to the private companies.

On January 12, 2005, the Turkish Prime Minister, Recep Tayyip Erdogan, visited Moscow. He was accompanied by 600 Turkish businesspeople. This visit represented the new business style between the two countries, as it showed that private companies were beginning to play an active role in natural gas negotiations and the other energy projects.

One of the important one, Samsun-Ceyhan Crude Oil Pipeline project, was planned to provide an alternative route for Russia's oil and to ease the traffic burden in the Turkish Straits: Bosphorus and Dardanelles. In 2005, Italian company Eni and the Turkish company Calik Enerji were appointed to be responsible for the construction and operation of the pipeline. On 19 October 2009, Eni and Calik Enerji signed an agreement with Transneft and Rosneft to include Russian companies in the development of the project.

Yet the integration of private business into natural gas negotiations could not reverse the trade deficit of Turkey against Russia. As seen in Figure 1, Turkey’s deficit increased rapidly because of the energy deals between Turkey and Russia. One of the main reasons for the deficit was the abandonment of the barter system that had previously existed and that had seen Turkey receive Russian natural gas in exchange for Turkish goods. An increase in the natural gas volume that Turkey required as well as the prices of oil and natural gas favored Russia and propelled the total trade deficit to around $177 billion over the last 10 years (2005-2014). For comparison, the deficit was only $23 billion in the previous 10 years (1995-2004). 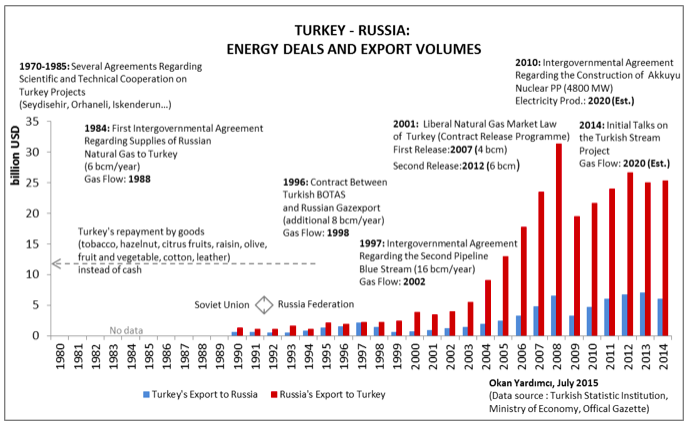 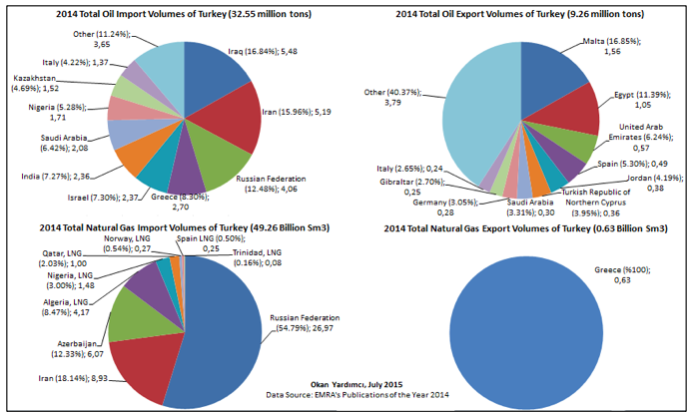 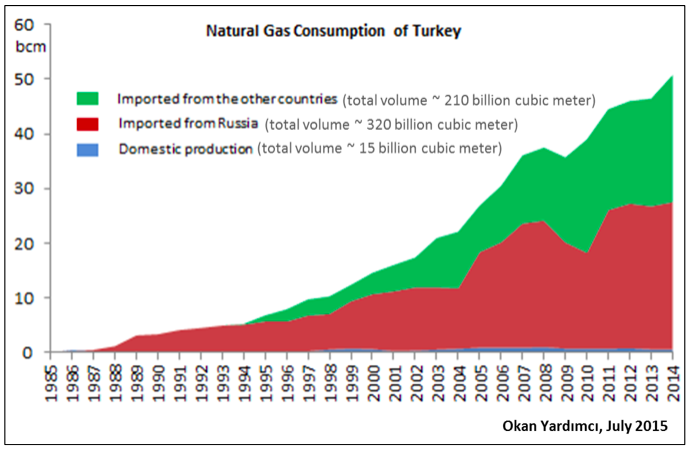 Figure 4 shows the contracted volumes of the next 10 years and according to the existing agreements, Russia will increase its market share in the Turkish natural gas market. 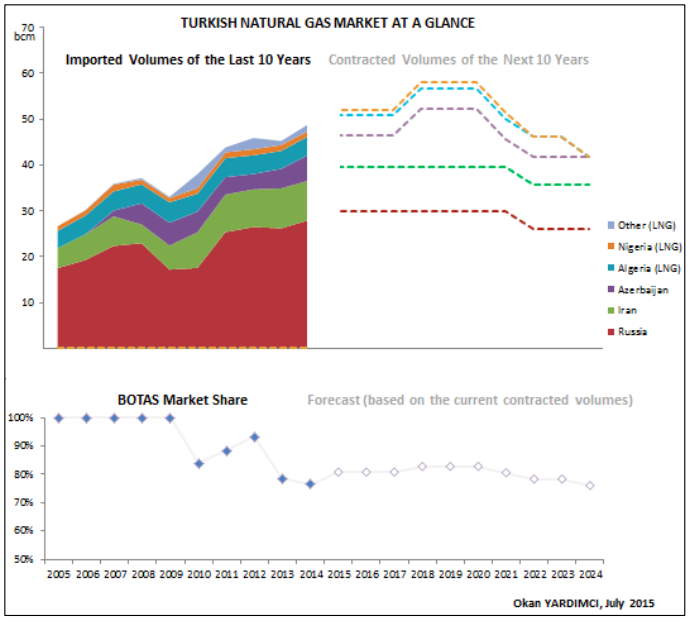 Engineering and survey work started at the site in 2011. According to the Russian company Rosatom, the construction of the first unit will begin in 2015, with four units put into service in 2020. Turkey has guaranteed that it will purchase 70% of the power generated from the first two units, as well as 30% from the third and fourth units, over the course of a 15-year power purchase agreement. The electricity will be purchased at a price of $0.1235 per kWh, and the remaining power will be sold on the open market by the producer. Russian company, Rosatom, announced that it would “transfer 49% of the project's shares to the other investors” before starting construction.

In addition to this nuclear deal, the other prominent project in recent years is informally known as the Turkish Stream pipeline project. After the European Union’s stance about competition on Russia and the conflict between Russia and Ukraine, Russia declared its intention to diversify its demand route by creating a new direct pipeline that runs through Turkish territory. The construction of the Turkish Stream pipeline was first discussed between Gazprom and BOTAS in December 2014. With an annual capacity of 63 billion m3, this pipeline will replace the South Stream, since the construction was suspended over the European Union’s stance about competition. According to initial plans, the Turkish Stream will extend from Russia, through Turkey and stop at the Greek border, giving Russia access to the southern European market. 14 billion m3 natural gas was planned to be consumed in Turkey. If the initial plan will not get off the ground, the contracted volume figures of Turkey will be shaped as in Figure 5. 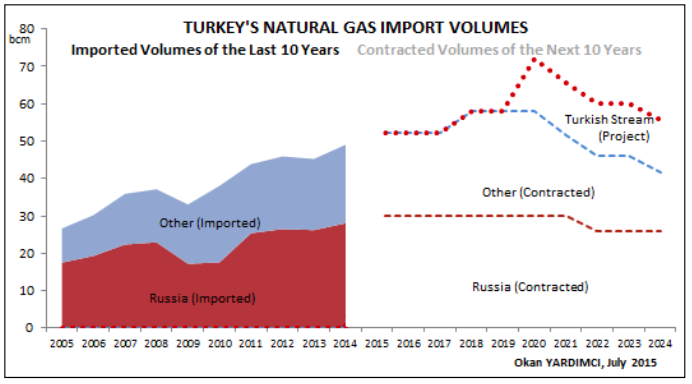 The Russian economic situation is one of the main barriers to the whole project. Moreover, alternative routes and projects for both Turkey and Russia are on the agenda and they are competing with the Turkish Stream Project. On the other hand, the first line of the Turkish Stream (expected to carry 15.75 billion m3 of natural gas) may cost 3.3 billion Euro, and the parties are willing to start with the first line as early as possible.

All opinions/views expressed in this report are the author's own, and do not represent any academic institution or government agency.

For the full version of the report please click here

About the Author:
Okan Yardımcı is a Petroleum and Natural Gas Engineer, MBA, LL.M. c., Ph.D. c. (finance). Mr. Yardimci is also experienced in econometrics, finance, regulation, Turkish energy market, tariff applications, energy geopolitics and USA energy market. He is giving lectures in some universities and participates in many conferences all over the world. He is publishing his articles and materials on the web: www.enerjiuzmani.blogspot.com
He is currently in the US studying law and can be reached by e-mail: okanyardimci@gmail.com