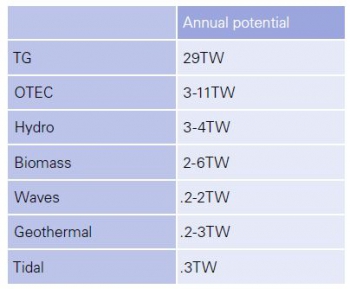 Every energy source has detractors and its inherent risks and drawbacks, therefore, the more services that can be extracted from a single source and can be conveyed along a single corridor the easier it will be to provide light, heat, water and transportation or those who need it.

The most abundant energy sources are the renewables solar and wind that are impaired by intermittence and therefore are not dispatchable. The only renewables that are dispatchable without separate energy storage are thermodynamic geoengineering (TG), ocean thermal energy conversion (OTEC), hydroelectricity, biomass, waves, geothermal and tidal power. 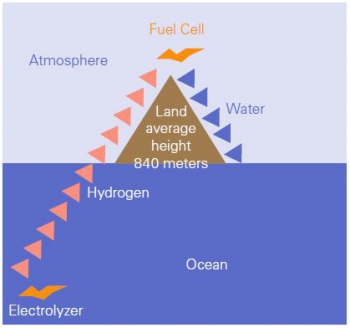 Based on the work of Marc &Richard Perez in their paper A Fundamental Look at Supply Side Energy Reserves for the Planet, and here, the following are the annual potential for these sources:

For the most abundant of these, a hydrogen grid is better suited to conveying power from the producer to consumer than an electrical grid that can also be more hazardous. Furthermore, unlike an electricity grid, hydrogen is a water as well as energy carrier. And water is arguably even more vital than energy.

As shown in the following graphic, deep water electrolysis produces hydrogen with the potential to produce mechanical, electrical and gravitational energy as well as water.

Compressed hydrogen has the highest energy potential by weight of the non-nuclear materials.  The most efficient way to produce compressed hydrogen is to perform electrolysis in deep water where at a depth of 1,000 meters the pressure is 100 bar. At the surface therefore the gas arrives logarithmically about 70% of the way towards the 700-bar required for modern transport hydrogen tanks.

The optimal operating pressure of PEM fuel cell systems in automotive or stationary applications is about two orders less than this.

In a fuel cell hydrogen is combined with oxygen to produce electrical energy and water in a process that is thermodynamically the mirror image of electrolysis.

Water produced by fuel cells on average would have a hydraulic head of 840 meters or about four times the current potential of the Hoover Dam. Hydrogen and water can be combined in a stationary installation at any elevation however to produce energy and water, and the hydraulic head between where it is produced and where it is needed can be used either to augment the system's energy output or to facilitate water distribution. 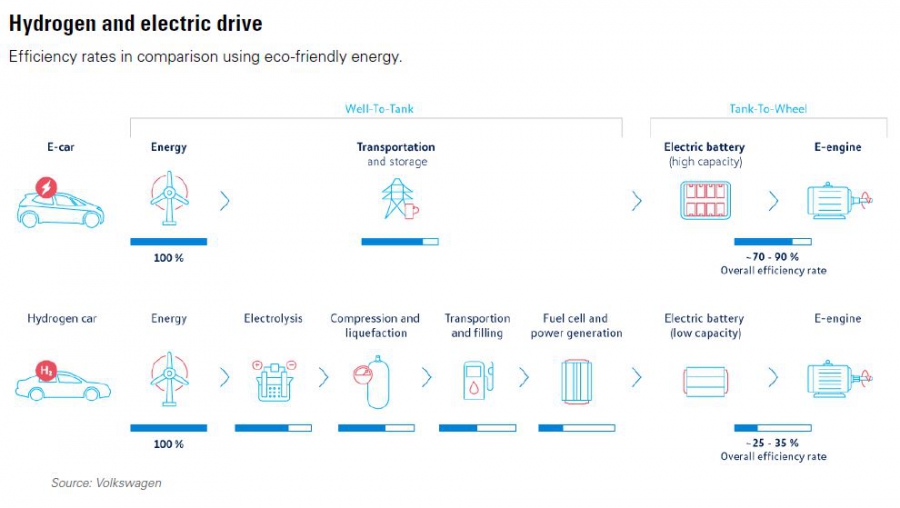 Volkswagen, the world’s largest automaker, has come down firmly on the side of batteries, therefore electricity, as opposed to fuel cells and hydrogen. It explained why in a recent, well-illustrated press release per the following:

The automaker cited a study by management consultancy Horvath & Partners which found that battery-electric cars have an efficiency of 70% to 80% compared to 25% to 35% for the fuel cell vehicles.

Yet Horváth & Partners claims, “The use of green hydrogen will be a crucial contributor to the decarbonization of the economy and our society.”  And that, “Achieving the climate protection targets requires all sectors to contribute, and green hydrogen based on regenerative energy – one of the most important emerging technologies – plays a key role here. Whether in transport, industry or the heat sector, our experts will support you in the course of the green transformation with green hydrogen.”

The VW graphic also appears to be inaccurate. The U.S. Department of Energy says the theoretical maximum efficiency of fuel cells is generally between 40–60% energy efficient. And electrolysis and compression are greatly enhanced by deep water electrolysis.

Further, GreenCarReport notes Honda, Hyundai, and Toyota remain staunch advocates of fuel cells. Each currently sells a fuel-cell vehicle in the U.S., albeit only in California due to lack of fueling infrastructure elsewhere. And Honda and Toyota don't even offer battery-electric models in the U.S.

But the elephant in the room with the VW graphic is the environmental cost of the production of electricity, 63% of which is derived from fossil fuels, according to the U.S. Energy Information Administration. The IMF has estimated this cost at $5.2 trillion/year, and it is this that we should be focused on rather than the efficiency of the energy conversion.

Global warming is waste heat, every dollar of the conversion of which is money in our pocket. And the delivery of this energy is dependent on a hydrogen grid that produces light, heat, water, transportation and gravitational potential rather than an electrical grid that is absent half of these ingredients.

(Jim Baird is  an inventor and developer of the concept of thermodynamic geoengineering and two of the three geological nuclear waste disposal options listed in Wikipedia. This article was first published on Energy Central and is republished here with permission.)

For further reading on high pressure and deep-water electrolysis see: