Egypt Positions Itself at the Center of a New Energy Market

A string of sizable natural gas discoveries has been made in the eastern Mediterranean Sea over the past decade, and Egypt is working to ensure that it reaps the benefits. On Aug. 31, Cairo signed a preliminary deal with Cyprus to build an underwater pipeline linking Cyprus' Aphrodite natural gas field with the Egyptian coastline. If the project overcomes the considerable hurdles that still lie in its path, including uncertain funding, the pipeline could be operational by 2020, enabling Cyprus to finally begin producing from its largest known natural gas deposit.

For Egypt, though, the deal is but one small part of a much broader strategy. As the promise of eastern Mediterranean energy draws in significant amounts of foreign investment, Cairo hopes to become the center of regional natural gas development. But as Egypt well knows, it cannot do that until its own house is in order. In the mid-2000s, Egypt became a net exporter of natural gas, thanks to the discovery of several deposits off its coast. However, after peaking at 20 billion cubic meters (bcm) in 2009, Egyptian natural gas exports fell sharply as declining exploration, investment and upstream activity took their toll on the country's output. By 2015, Egypt had largely shuttered its two natural gas liquefaction facilities and its pipeline to Israel, once again becoming a net natural gas importer. For Egypt's energy sector, as for the rest of its economy, the problem was primarily the massive subsidies driving up domestic demand and dragging down production. Since 2008, Cairo had fixed the price of natural gas at $2.65 per million British thermal units (mmbtu), a boon for Egyptian consumers but a hindrance to outside investment. In an effort to rein in runaway consumption, President Abdel Fattah al-Sisi began implementing price reforms and paying energy firms more for their natural gas in 2014. And though al-Sisi's energy reforms have met resistance, energy companies have returned to Egypt with a vengeance. 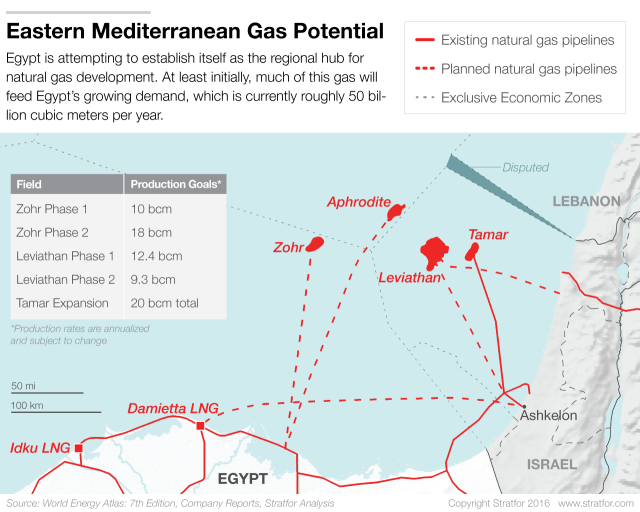 Yet in spite of this success, Egypt is unlikely to become the major natural gas exporter that it once was. The country's annual consumption, currently at around 50 bcm, is on track to keep rising in the coming decade. At the same time, Egypt will have to continue increasing energy prices so that it can afford to keep buying natural gas from producers. Because Cairo has mandated that any new Egyptian output must first be put toward feeding the country's own ever-expanding market, little will be left to send abroad. Consequently, most of the natural gas Egypt exports in the future will have to come from the stocks it buys from beyond its borders. And for two of its neighbors, Cyprus and Israel, making use of Egypt's existing LNG facilities is a far better option than sinking the capital required to build new ones.

Will fracking make a comeback in Germany in face of gas crunch?