The European Federation of Energy Traders (EFET) published its sixth annual gas hubs benchmarking study, which rates hubs based on their liquidity, transparency, costs, risks and other factors.

Scoring highest were the UK’s NBP hub with 20 points, followed by the Netherland’s TTF with 19, according to the report released on November 4. Hubs in Italy, France, Austria, Spain and Denmark now consistently score more than 15 points, EFET said, although transparency and system balancing can still be improved further. Future growth in liquidity in these countries will likely grow depending on other market development factors beyond hub design, it said, and could simply be restricted by market size.

Mid-level hubs in the Czech Republic and Hungary have continued to increase in score, rising from 14.0 to 14.5 and 11.5 to 12.5 respectively this year. But EFET urged them to do more to improve in terms of transparency and implementation of balancing markets, licensing procedures and hub fees. Poland’s score was unchanged at 9.5, and it was overtaken by Slovakia, Greece and Turkey.

Out of the new hubs, Ukraine has boosted its rating from 3.5 to 7.0, thanks to improvements in consultation and implementation of daily balancing. Slovenia and Croatia have made efforts to establish title transfer points and put in place balancing rules, scoring 6.0 and 7.5 respectively.

Bulgaria and Romania have seen some limited progress in information disclosure, but lag far behind other hubs in terms in introducing network codes for balancing and creating working hubs. Bulgaria’s score rose from 4.5 to 5.0, while Romania’s score climbed from 3.0 to 4.5. The EFET called on the pair to engage more with market participants and address their concerns, in order to benefit from greater competition and clear price signals. 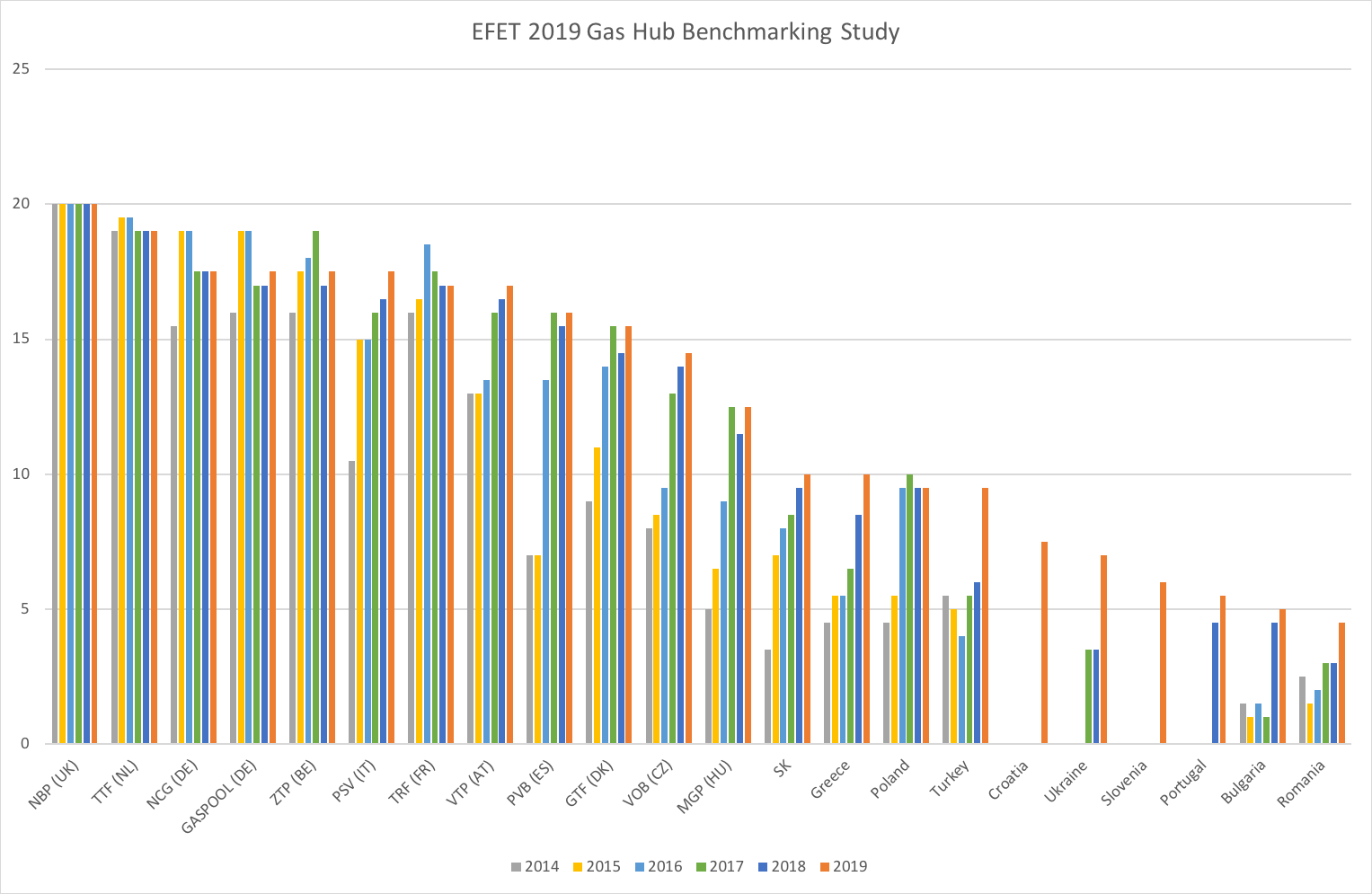 “The gas hub benchmarking study continues to be useful means to measure progress in the EU gas markets, and the commitment to implementing good practice in a way that will encourage market participants,” EFET’s gas committee chair Doug Wood said in a statement. “We are pleased to see the study being referenced widely and as a guide beyond the region in looking at how to establish clear and reliable gas hub price indexes.”

EFET’s chair for gas hub development, Steve Rose, added that the federation was “pleased to see increasing scores in so many of the less mature markets, showing the improvements made, not least through implementation of EU network codes, but also in making information more accessible and administrative obligations less burdensome.”