French-owned EDF Luminus plans to close definitively four of its natural gas fuelled power plants in Belgium on October 31, 2017. It officially informed the Belgian government about this intention on June 27, in line with the law, so that the government can decide whether to take precautions to ensure the security of supply.

The four plants are only used as peaking plants and because of falling demand for electricity, more electricity production from renewable sources and the low price of CO2, coal fuelled plants are increasingly used as peak plants. In Belgium, the last coal fuelled plant closed earlier this year, but here renewables enjoy a legal priority to access the grid, and seven nuclear plants offer an abundant and cheap baseload. Because of all of this, gas-powered plants are inactive most of the time. 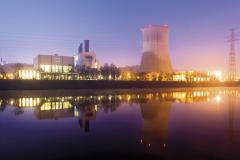 EDF Luminus wants to close two plants near Liege, one near Ghent and one near the small city of Izegem. Together, they have a capacity of 609 MW and employ about 40 people. The company will assist the trade unions in seeking new jobs for those people. With a market share of about 20%, EDF Luminus is the second largest power and natural gas supplier on the Belgian market.

The legal procedure offers the Belgian government some time to decide whether it considers the availability of some or all the plants EDF Luminus wants to close to be crucial for the so-called strategic reserve. This reserve consists of non-operational power plants, which can become active within some hours, as distinct from peak plants, that only need some minutes to start. The government can force some plants to become part of the strategic reserve, but also has to reach a financial agreement with the owner(s) about the costs for maintaining these plants.