Speakers at the 14th Economist Summit held in Nicosia November 1-2 struck a more confident note than in the past. A lot is happening in the region, including in Cyprus itself, with more to come.

The subjects covered during the summit included the division of Cyprus and the challenges facing investment in energy.

In his opening speech, the president of the republic of Cyprus Nicos Anastasiades said that the island is a bridge between the EU, the eastern Mediterranean and the Middle East. It has established strong co-operation with all countries in the region – except of course Turkey. As such Cyprus has a major geostrategic role to play in the region, based on three pillars: respect for international law, creation of opportunities, and a conviction that hydrocarbon discoveries will lead to closer co-operation.

Key to this is the creation of a hydrocarbons corridor between the eastern Mediterranean and Europe, be it through pipelines or LNG. The gas pipeline inter-governmental agreement between Cyprus and Egypt and the resulting potential for selling Aphrodite gas to Egypt contribute to this.

He also reiterated that Cyprus will continue with its energy plans, despite Turkish provocation, for the benefit of all its legal citizens. But solution of the Cyprus problem is key.

Cyprus’ foreign minister, Nikos Christodoulides, who followed, said that Cyprus holds huge hydrocarbon reserves and can contribute to Europe’s energy security. Cyprus is in the process of setting up a new framework for dialogue with its neighbours Egypt, Israel, Lebanon and Greece. Turkey should realise that it has more to gain if it joins the other eastern Mediterranean countries in this process, than if it persists continuing its aggressive position. Cyprus will not respond to Turkey’s provocations, but would be happy to engage with Turkey based on international law and UN Convention of the Law of the Seas. 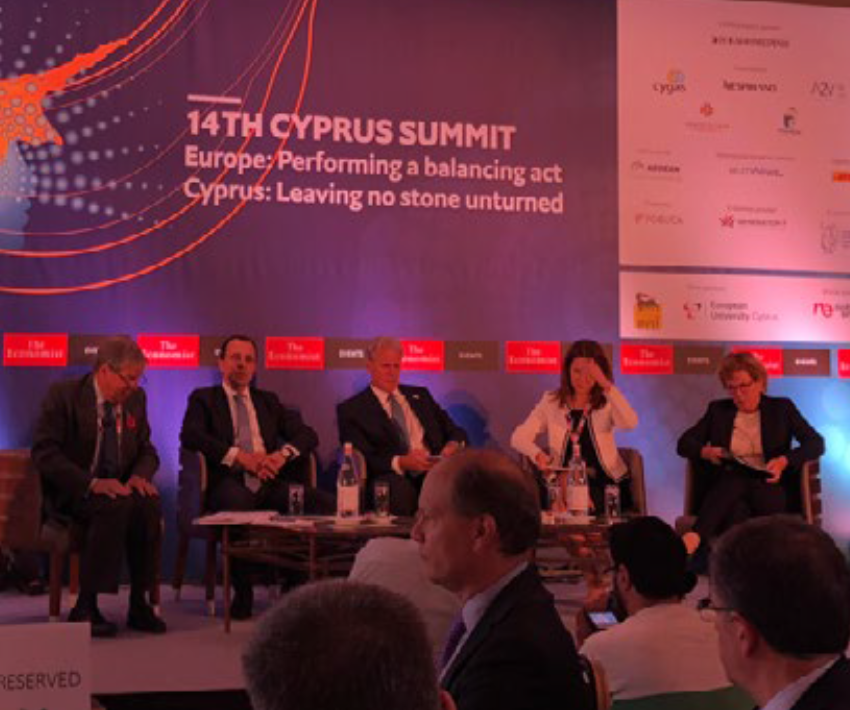 He said that the EU should engage more closely and more actively with the region on energy – he is making this case in Brussels.

Cyprus wants Turkey to be involved in the development of energy in the region, but the pre-requisites are that it must recognise the Republic of Cyprus and resolve the Cyprus problem.

Responding to a comment that Turkey’s position on eastern Mediterranean energy is either to control it or stop it, Christodoulides said that the door is open to Turkey to co-operate. But Cyprus will not stop exercising its rights to develop its energy.

A deputy minister in the office of Israel’s prime minister, Michael Oren, talked about the close political and security co-operation between Israel and Cyprus, strengthened by energy links. Israel is fully supportive of Cyprus’ rights to explore and exploit its exclusive economic zone and calls on Turkey to avoid any actions that interfere with this. Turkey is an important player in the region, but it must abandon its adversarial role. Oren went further. He said that Israel stands by Cyprus and Greece in the face of Turkish threats.

The US ambassador to Cyprus Kathleen Docherty said that the presence of energy resources is a game-changer for the eastern Mediterranean. She confirmed that the US is in the process of developing a broader strategy for the region and strongly supports the tri-lateral meetings that have been taking place between Greece, Cyprus and their neighbours, leading to closer cooperation.

The US is planning to expand and increase its presence in the region. It supports Cyprus’ rights to develop its hydrocarbon resources, with the benefits to be shared equitably between Greek and Turkish Cypriots and the two sides must work out how to do this. She emphasised that military intervention has no place in commercial activities.

Two events stand out. The forthcoming drilling by ExxonMobil in Cyprus’ block 10 and the drilling in progress since end of September at Egypt’s Noor prospect offshore Sinai by Eni (Figure 1). The results are expected by the end of the year. 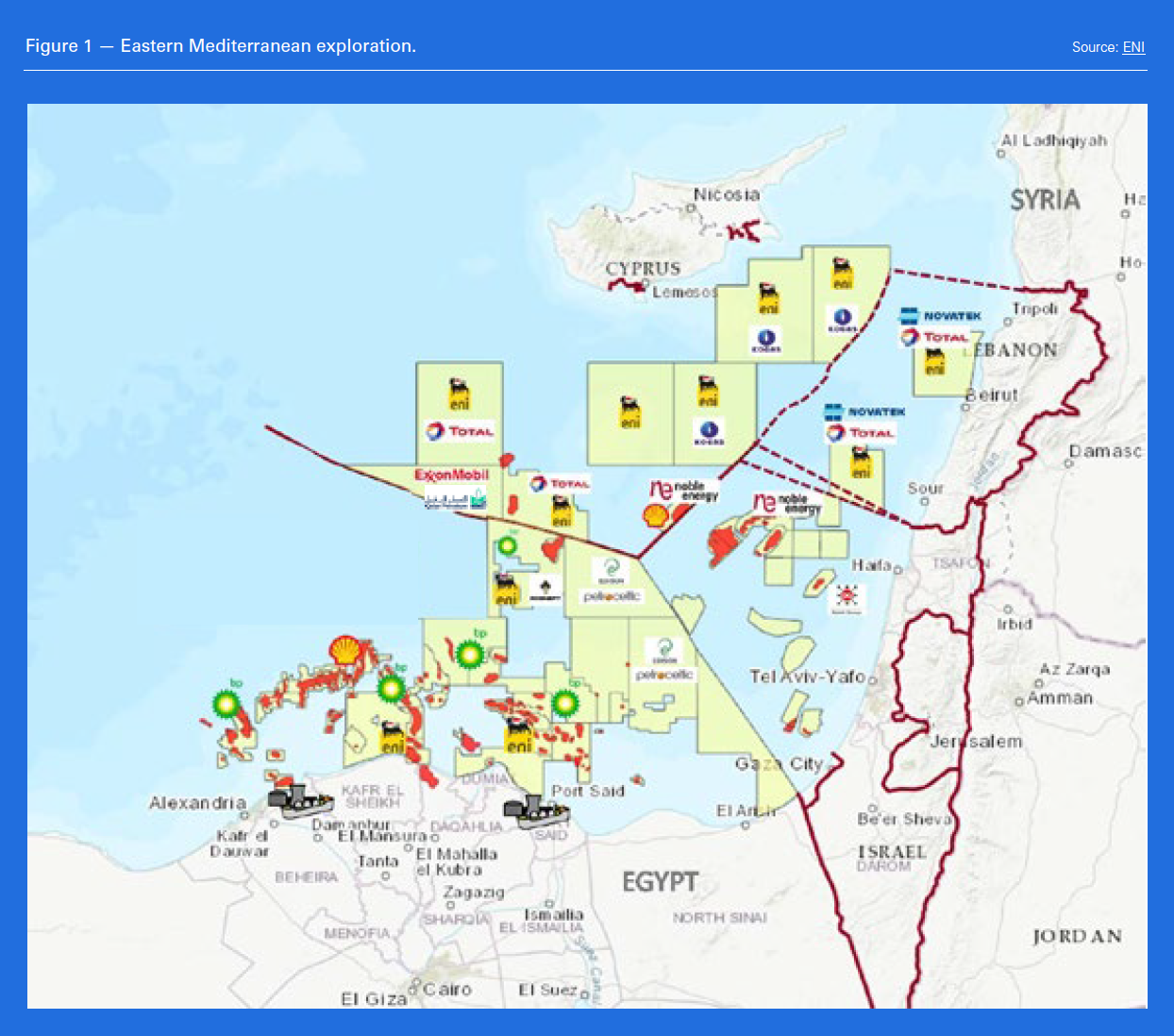 Both are very promising. Should they lead to major discoveries, for which there are high hopes, they could transform the region, not just in terms of the gas industry and exports, but also geopolitically.

Gas prospects in Cyprus and the eastern Mediterranean were addressed by its energy minister Giorgos Lakkotrypis and senior representatives from the oil companies operating in the region.

A preliminary agreement has been reached with the Idku LNG plant in Egypt on selling gas from Aphrodite. Lakkotrypis outlined a number of priorities in Cyprus’ energy plans:

ExxonMobil’s vice-president Europe, Russia and Caspian, Tristan Aspray, presented an overview of gas discoveries in the eastern Mediterranean, but noted that so far there have been limited exports outside the region. He said that global gas demand is growing and that gas has a critical role to play as a natural partner to renewables. He confirmed that ExxonMobil is ready to start drilling in block 10 mid-November. 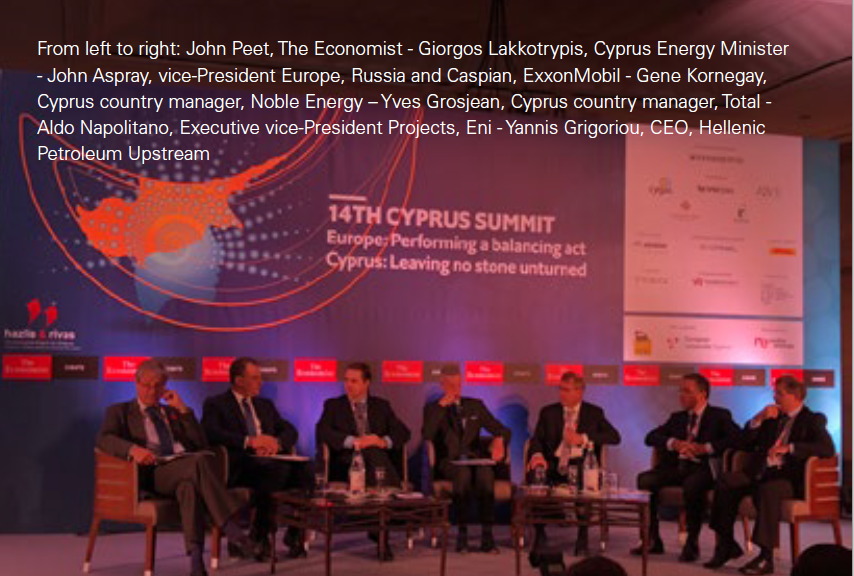 The discoveries of Zohr and Calypso, both close to block 10, confirm its potential, he said. Should a significant discovery be made and depending on quantities, ExxonMobil’s preference is to construct an LNG plant in Cyprus as it would be convenient for exports to Europe and to Asia through the Suez Canal.

Eni’s executive vice-president for projects, Aldo Napolitano, said that the eastern Mediterranean is still an emerging gas province. What has been important for Cyprus is confirmation through recent drilling that the carbonate formations, characteristic of Zohr, extend into Cyprus EEZ, giving hope for more discoveries.

Noble Energy’s country head Gene Kornegay expects to move into the development and production of gas from the Aphrodite field soon. But first the negotiations for the various necessary agreements must be completed. The Cyprus-Egypt intergovernmental agreement was an important step in this process. But regional geopolitical risk remains high, despite the tri-partite meetings that have been taking place so far. He emphasised that investments are made for decades and they need certainties.

His counterpart at Total, Yves Grosjean, said that gas is becoming quite important in the company’s portfolio. Total’s ambition is also to integrate renewables into its future business. It is building a low-carbon electricity business, integrated with solar power. Global hydrocarbon resources are not in short supply and companies must position themselves competitively for periods of low prices.

The CEO of Hellenic Petroleum Upstream Yannis Grigoriou  presented the company’s activities and forthcoming exploration plans in Greece. He said that discoveries in Greece can contribute to the development of a hydrocarbons infrastructure network connecting the eastern Mediterranean to Greece and the rest of Europe.

Impact of global markets and prices

ExxonMobil’s and Eni’s drilling are happening at a time of increasing global demand for LNG. Bloomberg forecasts a gap between demand and supplies developing after about 2025, if one follows its base projections, or earlier if higher demand actually happens (Figure 2). This would open opportunities for LNG exports from the region, both from Egypt and Cyprus. But there will be strong competition from new, competitive, projects coming up in North America, Qatar, Africa, Australia and Russia. 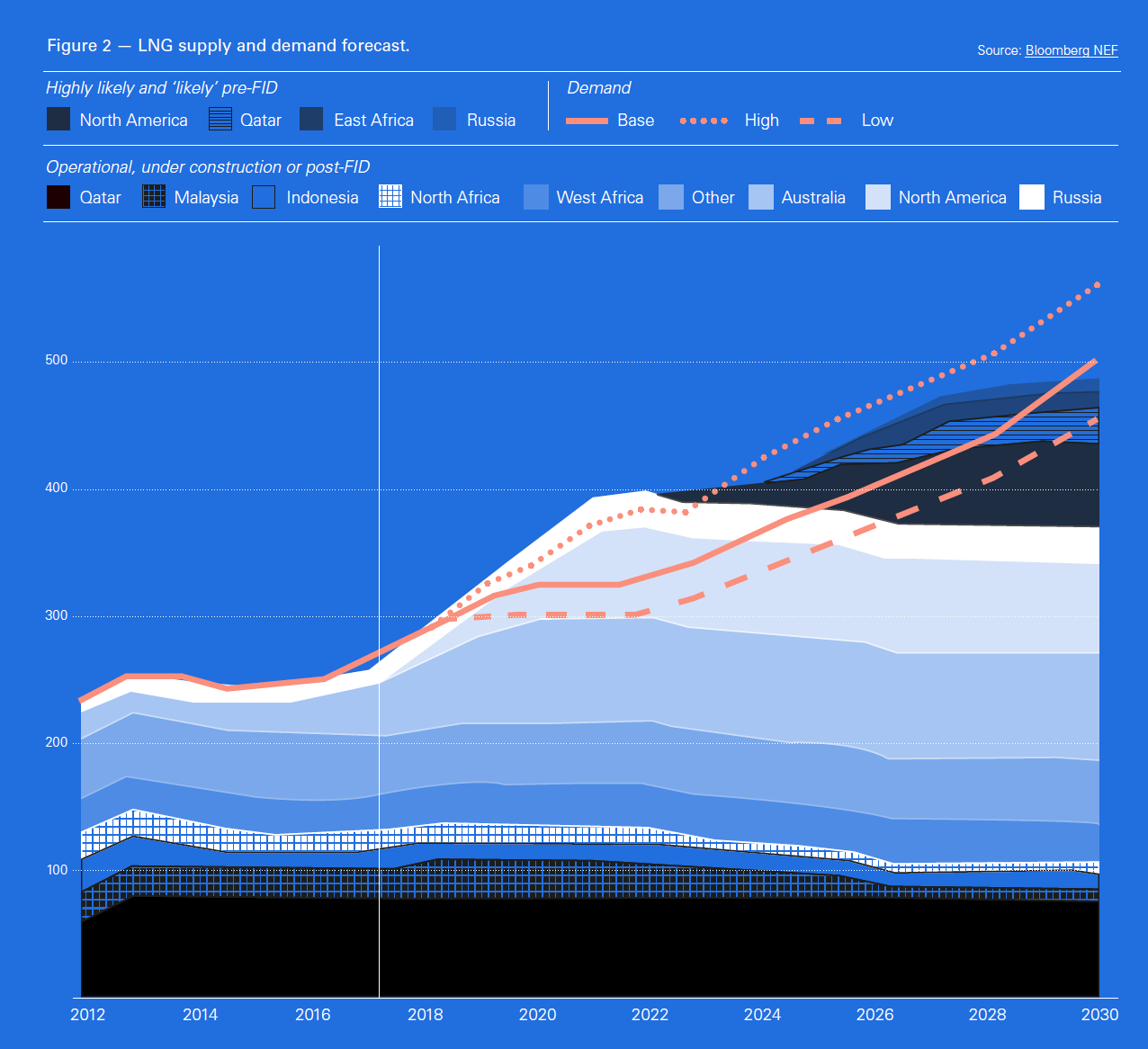 But the global market is anyway in a state of flux. Sanctions and the trade war between the US and China are posing increasing threats to global LNG trading. In fact these have brought home to China its vulnerability to threats to its energy supplies, where these rely on others. On top of this, China is going through an economic slowdown, expected to be long-lasting.

Under these threats, energy security concerns and for economic reasons, China last month changed its policies allowing regional governments to increase clean coal production and demand. Combined with a rapid increase in renewables capacity, China is countering these threats by boosting indigenous resources. In doing so, it has relaxed its clean air policies that led to the massive increase in LNG demand late last year and most of this year. In addition, the Power of Siberia pipeline, with 38bn m³/year capacity, is over 90% complete and is expected to start delivering gas to China in 2019, taking up a significant part of China’s future gas demand. These developments are already impacting China’s LNG imports, slowing down growth.

Japan released in July its new energy plan to 2030, going back to nuclear and reducing use of LNG. It aims to reduce LNG imports from 84mn metric tons last year to 62mn mt/yr by 2030. This process has already started. South Korea is doing something similar, by restarting nuclear power production.

India talks about more gas in future, but its pipeline infrastructure cannot handle increasing LNG imports beyond the existing import terminal capacity of 30mn mt/yr. Building pipelines is very challenging and takes very long, and on the other hand, India is not giving up coal. The priority in India is a rapid increase in cheap renewables, with a target to increase capacity to 175 GW by 2022.

These developments are already having an impact on slowing down growth of LNG demand in Asia.

The global market is price-sensitive. This was confirmed at an LNG conference in Tokyo last week. There was also a rude awakening in the UK during last month. Gas prices higher than coal prices, even after allowing for carbon pricing, let to the resurgence of coal imports. Clearly cheaper still beats cleaner – even in the UK.

And there is plenty of gas from Russia and the US that can be brought to northwest Europe for $6.50/mn Btu or less.

This is what LNG from the eastern Mediterranean will have to compete with if it is to succeed finding markets. As ExxonMobil’s Tristan Aspray made clear this will be essential in demonstrating commercial viability of an LNG export project in Cyprus.

The UN Inter-governmental Panel on Climate Change (IPCC) released its climate change Special Report in October, warning that global warming has already exceeded 1 °C and is on track to reach a temperature increase of 3 °C by 2100, well in excess of the Paris agreement to limit the increase to 1.5 °C, with “far reaching and unprecedented changes and consequences in all aspects of society.” A conference at the University of Cyprus on 1 November considered this and the need to speed up widespread implementation of renewables and particularly solar in the region, including Cyprus.

In response to the IPCC report, at the Oil & Money conference in London in October, Shell and BP robustly defended the oil and gas industry, but they agreed that “clearly it is a call to action”. Nevertheless they were on the defensive. Increasing divestment by the insurance industry and institutional investors and litigation by activists pose increasing threats to the industry.

As a result, in addition to pursuing exports, options should be considered to maximize use of eastern Mediterranean gas in the region.

The IEA has just released a report saying that the demand for gas in petrochemicals is expected to carry on increasing. With growing quantities of low-cost feedstock in the region, the petrochemicals industry provides great opportunities – Egypt is already benefiting from this. Cyprus should also prioritize these.

Eastern Mediterranean still has strong prospects for more gas discoveries, especially ExxonMobil in Cyprus and Eni at Noor in Egypt. In addition to looking for exports, companies producing gas in the eastern Mediterranean should consider options to maximise use of this gas regionally.