Built and operated by Dutch transporter Gasunie initially in order to help meet UK security of supply, so far the Balgzand-Bacton Line has only been able to carry gas from the Netherlands to the UK. But at the end of 2017, its wholly-owned subsidiary BBL Co announced it would make gas transportation in both directions possible from the autumn of 2019.

There had been pressure to act earlier, but whether there was not enough demand to justify the cost, given the abundance of gas available under Dutch soil, or whether the Netherlands did not want any more UK North Sea gas in the country, lowering prices, nothing happened.

And now a dozen or so years since start-up, and after engineering work at either end, BBL is now from this month able to flow gas in both directions. There is no compression yet built at Bacton on the Norfolk coast, so reverse-flow capacity will depend on the strength of the demand from consumers on the continent. The operator says a little over a third of the forward flow will be available in reverse: a maximum of 7 GWh/h (about 5.5bn m³/yr), compared with 20.6 GWh/h in forward flow. 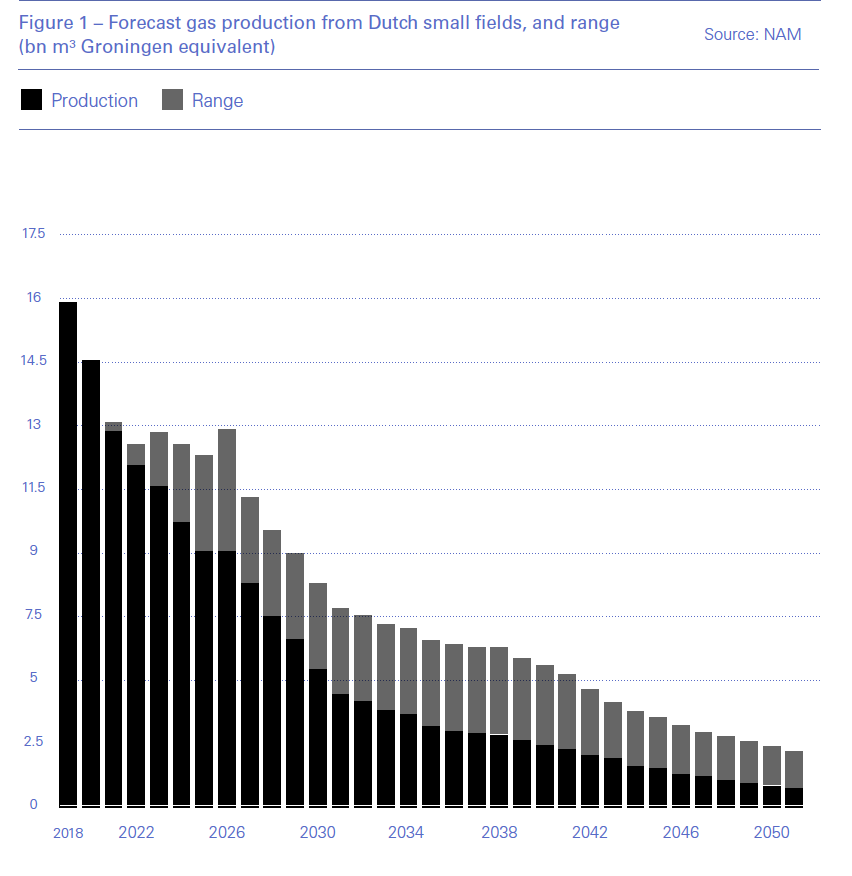 As with the bi-directional Interconnector UK pipeline which links Belgium and the UK, the direction of flow through BBL will depend largely on the prices at either end of the line each day, flowing towards the higher-priced market as long as the difference between the two is sufficient to cover the cost of transport.

BBL did not explain how it would manage the pressure drop to allow reverse flow, or where the gas would come from to pressure up the line and so allow forward flow to resume.

This makes the Netherlands stronger as a gas hub, able to source pipeline gas from the UK as well as Norway, and hence able to transit more gas to neighbours as well. It is already the most liquid in Europe, as home to the Title Transfer Facility.

But the timing is nevertheless significant, as the Netherlands is losing a major source of gas, faster than expected, while output from the other fields collectively is declining (see graph).

The Dutch government is seeking to cut output from the nitrogen-heavy Groningen field altogether, although the state mining supervisor SODM has ruled that annual production of 12bn m³ would be safe. The decision to reverse flow was taken after the decision to cut Groningen.

One industry source told NGW that reversing the BBL flow was not directly connected to the output reduction of the Groningen field, but to declining domestic production in general. The reversal was planned and is part of the policy of the Dutch government, even before Groningen became an issue, to secure gas supplies in the future and to remain an international gas hub despite the depletion of domestic reserves, he said. “But you could say that the process has speeded up,” he concluded.

And the Dutch situation might worsen: the field’s operators – Anglo-Dutch Shell and US ExxonMobil, equal partners in the NAM joint venture – might not decide that it is worth operating it for such small amounts of gas after 2022, given the field is going to close completely anyway by 2030 at the latest. They could decide to meet their gas sales commitments from other sources including LNG; and wind up operations at their 60-year-old venture sooner.

The two majors are also part-owners of GasTerra, the exclusive marketer of Groningen gas as well as a buyer and seller of other gas, each with 25%. The government owns the other half of the company, but as a public-private partnership, GasTerra has to negotiate with its clients as its shareholders agree between themselves. GasTerra sells gas and it is the role of the wholly state-owned transporter Gasunie to ensure that the customer receives gas of the correct specification.