Recovering global and domestic markets have Canadian gas producers optimistic about the future as the world emerges from the economic blight caused by the Covid-19 pandemic, but worries persist the summer may be volatile at western Canada’s key gas hub.

Optimism stems from developments both in Canada and south of the border.

In the US, LNG exports from Gulf Coast terminals continue to grow, but US producers have signalled little interest in growing their production. That leaves opportunities for Canadian producers to backfill in markets left short on gas by the demand pull from the liquefaction terminals. 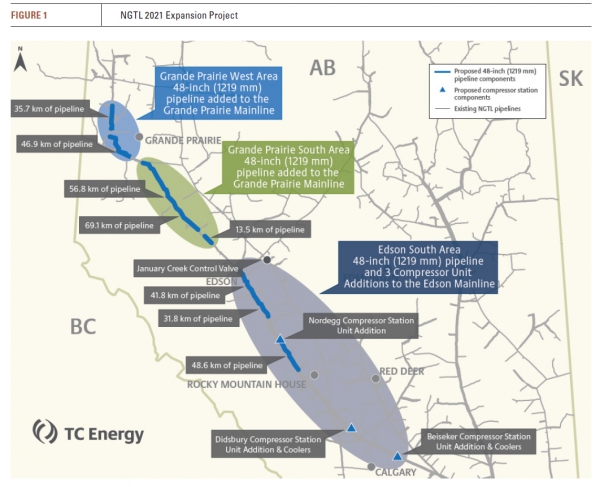 “The US has grown its LNG so they are exporting close to 12bn ft3/day as LNG and another 6bn ft3/day through pipelines to Mexico, so Canadian producers don’t have to rely on new demand from Canada to see strong natural gas prices,” Birchliff Energy CEO Jeff Tonken told reporters on the sidelines of a virtual investment symposium hosted by Scotiabank and the Canadian Association of Petroleum Producers (CAPP) in early April. “Our prices will start to firm up as they require our gas to make up the difference between the demand and the supply you’re seeing in the US.”

In Alberta, gas demand is growing as power utilities move away from coal-fired generation and oil sands producers – who use gas in thermal in-situ operations and to power mining projects – ramp production higher ahead of expected higher summer demand for crude oil and refined products.

The combination of those developments, Mike Rose, CEO of Tourmaline Oil, Canada’s largest natural gas producer, told reporters at the investment symposium, will provide some serious tailwinds for Canadian producers over the next few years.

“NGTL expansion will take basin demand to 18.5bn ft3/day, a 20% increase. Two to three years hence, LNG Canada starts up, initially at 2bn ft3/day but we all expect it will become a 4bn ft3/day project, when the second phase is added,” he said. “We will go from 18.5bn ft3/day to more than 22bn ft3/day of demand, and that will create a long-term positive structural change to pricing…for the foreseeable future. When you talk about the outlook for Canadian gas producers, that is huge and we are very excited about it, and it’s not that far off.” 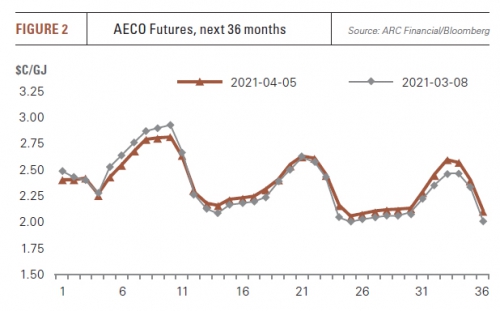 That’s the long-term view, and it’s held by many in the producing community. The shorter term, however, has significant uncertainty, stemming in large part from a decision by the federal Canada Energy Regulator (CER) in February rejecting an application to extend a special tariff provision that provided producers easier access to storage in western Canada during times of summer maintenance on the NGTL system.

The temporary service protocol (TSP) was in place for both the 2019 and 2020 injection seasons, and while it helped smooth volatility at the AECO trading hub in Alberta during NGTL’s 2019 construction season, it wasn’t needed in 2020, largely because, according to TC Energy, nearly 1bn ft3/day of new capacity was added to its system in 2019 and early 2020.

“As a result, the capacity and operational flexibility of the system has increased and NGTL does not believe that the acutely constrained access to storage seen in the summers of 2018 and 2019 will re-occur,” TC Energy said in an email to NGW late March. “This operational flexibility will continue to contribute to and facilitate storage access in 2021.”

The Explorers and Producers Association of Canada (EPAC) disagreed with that assessment, and in late 2020 filed an application with the CER to extend the TSP at least for the 2021 injection season. It argued that the federal government’s delayed approval last October of NGTL’s C$2.3bn 2021 expansion plan (Figure 1) to add about 1.45bn ft3/day of incremental capacity pushed the in-service date of the new capacity back by a year, to Q2 2022, and opened the door to storage access issues this summer. 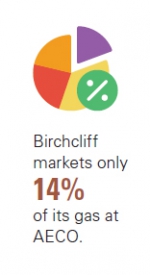 The CER rejected EPAC’s argument and refused to extend the TSP for 2021 but ordered NGTL to come up with another process to ensure timely access to storage. In response, NGTL came up with a transfers to storage (TS) pilot plan, under which some holders of firm transportation service (either receipt or delivery) could instead use that service to inject gas into storage instead of sending it to their originally-contracted receipt or delivery points.

“Transfers to storage will provide an additional way of accessing storage without the shortcomings of the TSP because it respects priority of service, sends appropriate market signals for allocation of existing system capacity and encourages the use of firm services,” NGTL said.

Interruptible Transportation-Storage (IT-S) would remain the primary way of accessing storage on its system, NGTL said; transfers to storage would only be needed when “little or no IT-S” was available.

EPAC, however, said the unproven nature of TS and the uncertain degree to which it would enhance access to storage “risks the return of the market chaos” Canadian producers found themselves in during the 2017 injection season, when lack of access to storage pushed AECO prices into negative territory.

“Among other issues, NGTL’s ability to unilaterally terminate Transfers to Storage at any time during the pilot and deny transfer requests creates high levels of market uncertainty,” EPAC said.

Darren Gee is the CEO of Deep Basin producer Peyto Exploration & Development and a long-time critic of the control TC Energy exerts on the western Canadian gas market through the way it operates its NGTL system.

He supported the extension of TSP for the 2021 summer season and points to the 2018 and 2019 summer seasons as a preview of what might be in store this summer without TSP and an extensive NGTL construction program.

“Those were the two smallest refills we have seen in the last decade, at 340mn ft3/day or around 73bn ft3 in total,” he wrote in a March report to shareholders. “If that’s the case, we’ll only end up refilling about 30% of what we just withdrew (about 260bn ft3) and it will leave AECO connected storage in a very precarious state, far short of what we need for a typical winter.”

Gee told NGW he has some “personal opinions” about what will happen to AECO prices this summer, which is why Peyto has virtually no exposure to the main Alberta trading hub for the next three seasons. Nor is he convinced the TS pilot offered by NGTL will actually work. 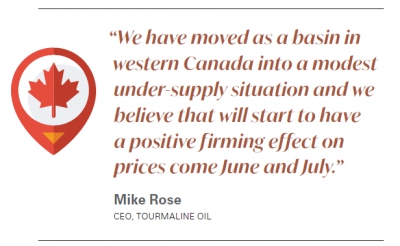 “I don’t believe storage operators will subscribe to their proposed solution,” he wrote in a late-March email. “That, combined with the impact of the expansion work on system capacity, leads me to believe little gas will make its way to Eastgate storage this summer, and while some gas may make it to storage upstream (of the main Eastgate storage complex), that’s not ideal for next winter and I think it will have a significant and negative effect on summer AECO prices.”

As part of a panel at the Scotiabank CAPP symposium, Gee expanded on his concerns surrounding the CER’s decision to abandon the TSP, the TS pilot program that replaces it and NGTL’s influence over how the western Canadian market operates.

Not good for Alberta

Birchcliff Energy CEO Jeff Tonken, joined Gee on the panel, and while he suggested that his Montney-focused company might benefit from the kind of “chaos” Gee suggested was in store for AECO this summer, “that would not necessarily be good” for either Alberta producers or the province of Alberta. “It’s better for Alberta to have a good solid AECO price,” he said.

Birchcliff only moves about 14% of its gas at the AECO hub, with most of the rest of its volumes exposed to prices at Dawn, in southern Ontario, and to basis differential hedges between AECO and Henry Hub, the main US trading platform. 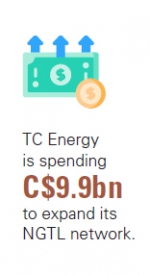 “We believe that stronger production and no TSP are expected to lead to a return to volatility for AECO, although it should be much less severe than in 2019,” Hue Tran, Birchcliff’s manager, gas marketing, wrote in an email to NGW. “The maintenance schedule released by NGTL shows some significant maintenance required at Eastgate in August, which is being reflected in summer strip prices.”

Tran also has concerns about NGTL’s TS pilot program, which allows producers to transfer their firm transportation-delivery (FT-D) service to storage. “The effectiveness of the…pilot project may be limited as those producers who hold FT-D service also hold transportation to other markets and would have to strand that service to inject into storage.”

Instead of AECO, Tran said Birchcliff is focusing its marketing programs through the Dawn trading hub in Ontario, and will use a fixed price transportation service TC Energy launched in 2017 to move about 44% of its marketed volumes there this year.

But Tourmaline’s Rose is confident that new capacity added by TC Energy to the NGTL system over the last couple of years won’t lead to interruptible service being cut, which would restrict injections to storage.

“One of the conditions that the CER put in place for TC Energy was that their new protocol to ensure storage operators can inject in the summer was going to work,” he told reporters at the Scotiabank CAPP investment symposium. “We have moved as a basin in western Canada into a modest under-supply situation and we believe that will start to have a positive firming effect on prices come June and July. We are really optimistic about this winter coming up and full year 2022.”