According to energy research firm Rystad Energy, global gas output fell by 3.6% in 2020 in comparison with the previous year, but lower prices encouraged power sector consumption, displacing other fuels, so the fall could have been greater. Nonetheless, average LNG spot prices fell to record lows below $2/mn Btu in May 2020.

The scale of the demand drop varied from region to region, with a 7% decline in Europe, where particularly long and deep lockdowns were imposed. However, Asian demand actually increased by 4% because of rising Chinese consumption and the continued switch from coal to gas in the region. 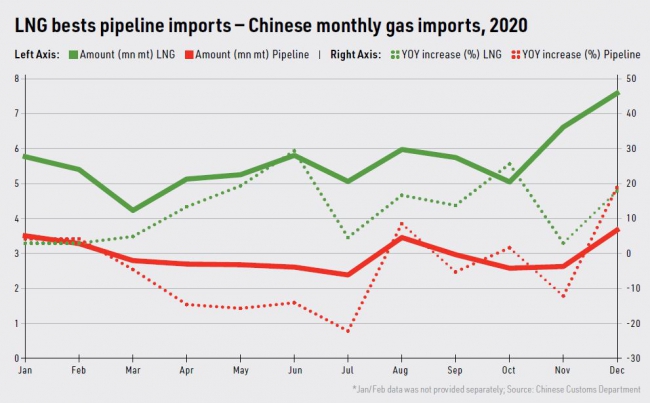 Covid-19 had two big effects on the industry: depressing market sentiment because of both the short-term and possible long-term impact on demand; and delays to actual project development because of lockdown restrictions and other mitigation measures. Severe restrictions on international travel for much of the past year have had an impact on the movement of both personnel and components, affecting import and export projects alike.

Only one new LNG project was approved last year, Sempra Energy’s Costa Azul plant in Baja California, with production capacity of 3.25mn mt/year. It is more than two decades since there was a year where no new LNG trains reached final investment decisions (FIDs).

This was a massive drop from the 70mn mt/year approved in 2019, but that number, in a market of just over 350mn mt/yr, was already bringing into question how much additional capacity might be required in the mid-2020s.

The FID on several projects was delayed, including Delfin Midstream’s Delfin Gulf of Mexico, on which a decision is now expected this year.

Shell had planned to take the FID on the 16.45mn mt/year Lake Charles project in the US, but has pulled out of the project, leaving Energy Transfer to take over as project developer. The two companies had expected to take 50% stakes each in the venture. Although taken at the end of March, when the pandemic was in its relatively early stages, the withdrawal does appear to have been influenced by Covid-19. 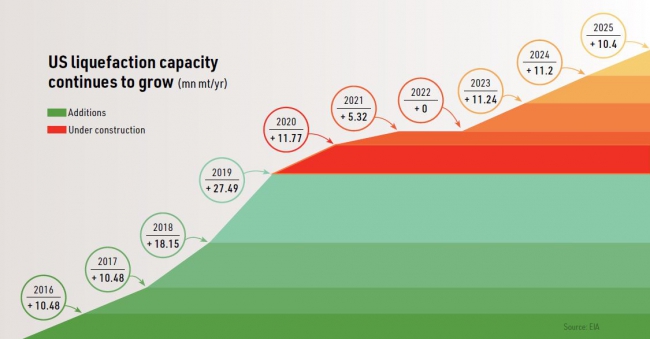 Maarten Wetselaar, Director, Integrated Gas and New Energies, Shell, said: “This decision is consistent with the initiatives we announced to preserve cash and reinforce the resilience of our business,” said “Whilst we continue to believe in the long-term viability and advantages of the project, the time is not right for Shell to invest.”

Even relatively late last year, most discussion was of the long-term impact of low prices. In September, McKinsey & Company said that it expected all pre-FID projects to be delayed by one to two years. “With coronavirus reducing oil demand and prices, majors’ capital spending dropped, weighing on their investment and pushing out FIDs”, it noted. Yet the same analysts said that some buyers had actually increased their expectations of the LNG volumes they would need.

Even last August, most sources were predicting continued soft demand almost everywhere outside China for the rest of the year, so the scale and pace of the recovery in LNG spot prices in the fourth quarter was unexpected. According to Wood Mackenzie, Asian LNG demand had by then reached pre-pandemic levels, leading to a ramp up in US export cargoes, from 44 in September to 83 in November.

According to Rystad, LNG shipments actually ended the year 3% higher than in 2020. To take one example, Australia’s LNG exports nudged up 500,000 mt for the year to 78mn mt/year. This was partly because of LNG’s growing share of the total gas market, from a 10-11% share in 2010 to 15% in 2020 with further growth expected in the future.

As a result, the LNG sector fared better than the piped gas industry, although 3% demand growth was still well down on the 12.5% achieved in 2019. It was also less than the 5% growth in total LNG production capacity for 2020, buoyed by new additions in the US and Russia, so a higher proportion of capacity was left unused. The US alone added 11.77mn mt/year last year, on top of the 27.49mn mt/year capacity increase in 2019.

The reasons behind the rapid recovery underline the fact that the coronavirus is just one of various influences on LNG demand and prices. The resurgence was partly the result of China’s strong economic performance. Despite first quarter shut-downs, Chinese industrial production ended the year 7.3% higher than in 2019 and Chinese demand helped support the price of many mining commodities, as well as that of LNG.

At the same time, much of Asia and Europe has experienced a colder than average northern hemisphere winter, driving up demand for gas heating and electricity. This has been exacerbated by Japan’s recommended Covid-mitigation strategy of opening as many windows as possible to encourage air flow. Moreover, while there are usually LNG production problems at one or two LNG projects somewhere in the world, late 2020 saw a string of plants affected, including in Australia, Malaysia, Indonesia, Qatar and Norway.

The lack of new capacity being added this year should help to support prices. Global supply is expected to increase by just 17mn mt/year over the year, with Australia accounting for much of this figure. Repairs to Gorgon are set to add 5mn mt/year to national production capacity, plus 3.6mn mt/year from the restart of Prelude.

The amount of new capacity already in the development pipeline suggests that developers were optimistic over future demand before the crisis struck, despite price weakness before the pandemic outbreak. Qatar looks certain to push ahead with its massive expansion programme, while more new capacity is scheduled for development in the US over the next few years.

The real test of the depth of the recovery and of market optimism will be whether projects in what will be new producing countries proceed as planned. Those at relatively early stages of development appear determined to do so. Despite intense security concerns in Mozambique, Total said in October that the Covid-19 crisis will not delay its Mozambique LNG project, which is expected to come on stream in 2024.

The company’s general manager of LNG Marketing, Rajnish Goswami, said: “As of now, the focus is on engineering and procurement and much of this stuff can be done through remote work so ... we have been able to navigate the challenge of Covid pretty well and we are still maintaining the timeline of the project”. A total of 11.1mn mt/year of the first two train capacity of 13.12mn mt/year has already been contracted and the Total-led consortium secured $14.9bn in debt financing at the height of the coronavirus crisis.

Even some European buyers are confident about future demand growth. Woodside announced on 18 January that it had doubled the size of its sale and purchase agreement with Germany’s Uniper to 1mn mt/year in the first instance, rising to 2mn mt/year from 2026.

The gas will be supplied from the proposed second train on its Pluto project, on which the FID is expected later this year. Chinese customers have pulled out of talks on taking more gas from the project, but that is the result of deteriorating diplomatic relations between Beijing and Canberra, rather than a lack of demand.

While the number of producers is increasing, so too is the number of markets. Emerging Asian LNG importers, such as Bangladesh and Pakistan, are expected to continue growing, providing they can secure enough gas at the right price. The Institute for Energy Economics and Financial Analysis has warned that $50bn of new LNG import terminals and gas-fired plants in the region could be postponed because of current high prices, but the price spike is expected to be short-lived.

Vietnam expects to see its first LNG imports this year, following reports of test runs being conducted at the end of 2020 at the Hai Linh Co.’s LNG terminal in Ba Ria-Vung Tau province. A second terminal in the same province is expected to come on-stream in 2022. These sources of demand provide some level of guarantee for LNG exporters, representing new, if price-sensitive, markets.

McKinsey predicts that it could take up to four years for total global energy demand to recover from the effects of the pandemic. As commentators have trotted out since the seriousness of the virus first became clear, these are “unprecedented” times, so it is difficult to be sure. Yet the recovery in the fourth quarter of 2020 and current high spot prices suggest that the impact of Covid-19 on the LNG sector will be less harsh than for other energy commodities, including pipeline gas.

Further ahead, demand for LNG will be greatly affected by its perceived role in the battle against climate change. It generates substantial greenhouse (GHG) gases, but there are opportunities for reducing both carbon and methane emissions, and it remains the least GHG intensive of the fossil fuels in an energy-hungry world where oil and coal still make up 60% of primary energy consumption.

Wood Mackenzie have said that 2021 will be a crucial year in terms of positioning LNG within the global energy sector, particularly as 75% of global LNG production is consumed by countries with carbon neutral pledges.

Wood Mackenzie vice president Massimo Di Odoardo said: “Policy makers will need to provide clarity on decarbonisation plans, including on how they see the role of natural gas, following pledges to achieve climate neutrality. Gas players will have to show commitments to decarbonise natural gas, including through carbon capture, utilisation and storage (CCUS) and blue hydrogen.”

The company believes that Covid-19 will not affect its long term prediction that global LNG demand will double over the next 20 years, particularly because of the shift from coal to gas on environmental grounds, with half of that increase to come over the next decade. Other analysts continue to predict similarly strong growth.