The Egyptian gas sector is not short of big players. The turnaround in its gas balance in recent years can largely be attributed to the exceptionally rapid development of the giant offshore Zohr field by Italy’s Eni, and a swathe of major production projects engineered by UK major BP.

However, US major Chevron’s arrival through the $5bn acquisition of Noble Energy, which was completed in October, brings another major on to the scene through the purchase of Israeli gas assets in the east Mediterranean with the intention of exporting production to Egypt.

Chevron now leads the group developing Israel’s Leviathan and Tamar gas fields. Israeli project partner Delek Drilling announced January 19 that the group has agreed to invest in a shekels 738mn ($227mn) pipeline to bring their gas to Egypt. Israeli Natural Gas Lines (INGL) will build the pipeline between the Israeli cities of Ashdod and Ashkelon. The gas producers will cover 56% of the pipeline's cost, with INGL meeting the remainder. 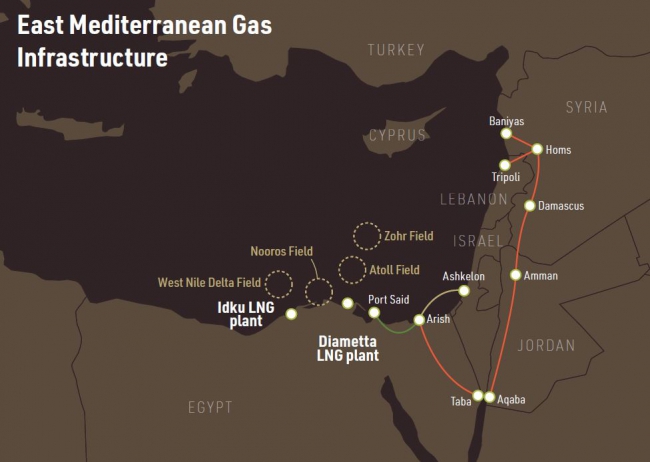 Together with upgrades of the existing gas system that will cost a further shekels 27mn, the pipeline will enable Chevron and its partners to ship up to 7bn m3/year of gas to Egypt. This will add to Egypt’s own domestic surplus, allowing it to ramp up pipeline exports to Jordan, if required, and LNG exports.

Both have seen highs and lows since their completion. From a peak of 14.7bn m3 in 2006, Egyptian LNG exports started to decline from 2009 as the government prioritised supply to the domestic but at prices too low to incentivise upstream investment, while demand, effectively subsidised by the state, raced ahead. By 2014, domestic gas consumption was beginning to outstrip production with LNG exports sinking to 0.4bn m3 and to zero the following year.

In a scramble to address its growing gas deficit, Egypt deployed floating storage and regasification units (FSRUs), turning it from an LNG exporter into an importer. By 2016, LNG imports reached 10.7bn m3.

However, a new government, higher gas purchase prices and the reduction in government debt for gas had started to pay dividends, resulting in major offshore developments, such as Zohr, coming onstream. By 2019, the FSRUs were gone and LNG exports have gradually re-emerged from the Idku LNG plant. They reached 4.5bn m3 that year.

2020 proved rocky for LNG plants producing spot cargoes and production from Idku declined sharply as spot LNG prices reached a nadir towards the end of April below $2/mn Btu. However, a sharp spike in winter spot prices saw a resumption of exports in the fourth quarter, averaging about 1.5 cargoes a week.

The winter price spike opportunity has been missed by the Damietta plant, which has been embroiled in complex ownership and contractual issues since 2012, delaying its return. However, these issues now appear to have been resolved, and the plant is slated to restart operations in the first quarter of this year.

Spain’s Naturgy in early December 2020 announced that it had cancelled its 3.5bn m³/yr Egyptian gas purchase agreement. In return, it would receive up to $0.6bn and most of Union Fenosa Gas (UFG)'s’ assets outside Egypt and Spain.

UFG was a 50-50 LNG marketing joint venture Naturgy owned with Italy's Eni, which has now been dissolved. Eni said after the restructuring it would own half of Segas, the company that owns Damietta. State entities Egas and EGPC would hold 40% and 10% respectively.

Eni will also take over the contract for the purchase of natural gas for the plant and will receive corresponding liquefaction rights, thus increasing the volumes of LNG in its portfolio by 3.78bn m³/yr, which will be available free on board, the company said.

The completion of the transaction, planned during the first months of 2021, once customary conditions are met, including the restart of operations in Damietta, will result in Naturgy’s departure from the Egyptian gas scene. 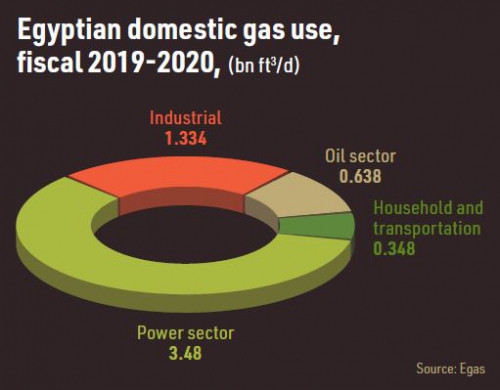 With legal and feedstock issues relating to LNG put to bed, the wind is set fair for the Egyptian gas sector, owing to increasing domestic demand – the government plans to increase gas use in the power sector, heating and transport -- broadening export options and attractive upstream prospects, which continue to draw in investment dollars.

On January 21, the UAE's Mubadala Petroleum announced that it has bought a 27% stake in the Shell-operated Red Sea Block 4 off Egypt. Mubadala has signed a concession agreement for the share with Egypt's petroleum ministry.

The 3,084-km2 Block 4 lies in the Northern Red Sea, adjacent to the prolific Gulf of Suez basin, Mubadala said, adding that the concession had "the potential to unlock substantial new prospects."  Shell has 63% and Egypt's Tharwa has 10%.

Also in January, Total won an operating stake in the North Ras Kanayis block in the Egyptian Mediterranean. Its partners are Shell (30%), Kuwait's Kufpec (25%) and Tharwa (5%). The exploration extends from 5 to 150 km from the shore and water depths range from 50 m to 3,200 m. The Herodotus Basin is an under-explored area and the partners' commitment includes a 3D seismic campaign during the first three years.

Meanwhile, Mediterranean-focused exploration and production company Energean has also expanded its presence in both the Egyptian and Israeli gas sectors through its acquisition of Italy’s Edison, a deal some time in the making, but which finally closed in December.

The company has lost little time in getting started. On January 21, Energean took a final investment decision on a subsea tieback project at the North El Amriya (NEA) and North Idkunea (NI) concessions offshore Egypt. The NEA area contains the appraised Yazzi and Python gas discoveries, while the NI acreage holds four more gas finds, one of which is ready for development, Energean said. First gas from NEA/NI is on track for the second half of 2022, with the project targeting 49mn barrels of oil equivalent in proven and probable reserves. Some 87% of this resource base is gas.

Oil and gas investment in Egypt accounted for about two-thirds of foreign direct investment (FDI) in 2019, which totalled $9bn, a rise of 11%, according to the UN Conference on Trade and Development, making Egypt the largest recipient of FDI in Africa.

2020 was a torrid year for FDI globally, owing to the coronavirus pandemic, with natural resource-based economies in Africa being hard hit. Inflows to Egypt dropped 57% to an estimated $1.9bn in the first half of the year, but the renewed interest being shown in the gas sector at the beginning of 2021 suggests FDI flows into Egypt could recover well this year.