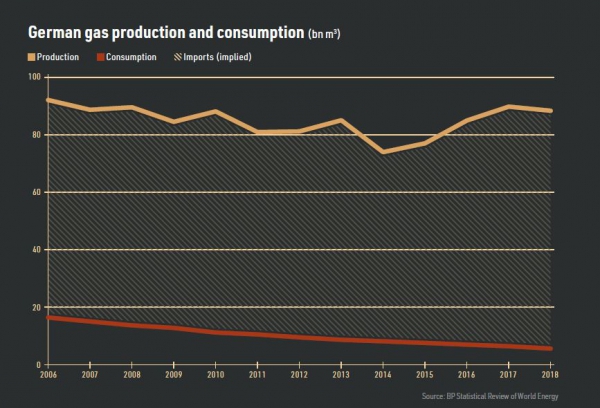 Gas use in electricity generation hit a peak of 89.3 TWh in 2011 before falling to just 61.1 TWh in 2014, the decline reflecting a period of exceptionally high oil prices. Owing to the then higher prevalence of oil indexation in gas import contracts, this made gas expensive and German gas-fired generators suffered a prolonged period of negative margins, which curtailed demand.

Fast forward to 2019 and the price of Brent oil is now in the mid-$60s/barrel compared with its $100/b plus levels in 2011-2014. There has also been a concerted push back against oil indexation, which means gas import contracts are now more closely tied to prices formed in liquid gas markets in northern Europe and more relevant competing generation fuels rather than oil.

There have also been three major shifts in German energy policy which all have a major impact on future gas use -- the phase out of nuclear power, support for renewable energy and, most recently, the planned reduction in coal and lignite use, which still forms the bedrock of German electricity generation.

Nuclear -- Germany’s reduction in nuclear generation is well underway and no further policy reversals or plant lifetime extensions are likely. Generation from the country’s nuclear plants has fallen from 167.4 TWh in 2006, when it provided 27.2% of national power production, to 76.1 TWh in 2018, representing a share of just 12.3%. The country has 8 GW of remaining nuclear capacity from six operating reactors, three of which are scheduled for closure in 2021 and three in 2022. 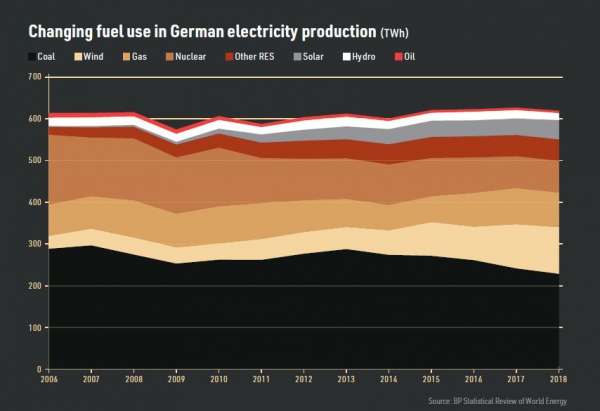 Renewables -- In an effort to reduce greenhouse gas emissions from its coal-heavy power sector, Germany has historically provided large subsidies to encourage the construction of renewable energy sources, the main beneficiaries being wind, solar and biomass. Generation from renewables in 2018 met a third of the country’s electricity needs, with wind providing 112 TWh, solar 46 TWh and biomass and waste 51 TWh. In the first nine months of 2019, renewables’ share of generation reached an unprecedented 43%, according to industry body BDEW.

However, onshore wind, the main component of Germany’s push into green power, has run into difficulties, owing to the introduction of restrictions on where new turbines can be built and other licensing-related issues. The first half of last year saw the completion of just 290 MW of new wind capacity, the lowest level of new construction in 20 years. Auctions in 2019 for new wind farms failed to attract sufficient bids to build all of the capacity on offer.

The government has set a target of sourcing 65% of the nation’s electricity from renewables by 2030. This target relies heavily on new wind. The country’s northern states are pushing ahead with the aim of nearly tripling offshore wind capacity to 20 GW by 2030, but unless the onshore wind sector’s problems are resolved, Germany will struggle to maintain its former rates of renewable energy expansion.

Coal -- In January this year, Germany’s Coal Commission finally reached a compromise on the phase out of coal and lignite use in the country’s power sector. Coal use is to end by 2038, but there will be a significant drop in coal and lignite plant capacity from 2022. There will be a review of the policy in 2032 to see if the end date for coal can be brought forward to 2035.

In 2022, the Coal Commission recommends the closure of 12 GW of the country’s 43 GW of coal and lignite-fired plant and a reduction to 17 GW by 2030. The Coal Commission’s final report is not legally binding, but is expected to result in two main pieces of legislation, a transition law on funding and a coal phase out law. 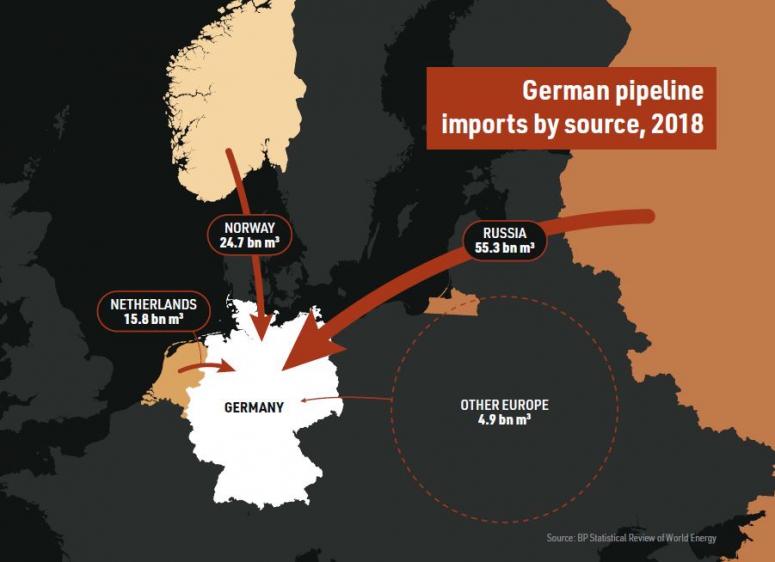 Natural gas is still expected to face stiff competition from renewables in the power generation sector, while LNG will have to compete with pipeline gas supplies. However, the desire to diversify the country’s gas imports is proving a major driver for LNG. Germany also wants a slice of the growing LNG bunker market in the North and Baltic Seas and is looking at LNG as a clean transportation fuel both on land and marine.

Germany is already well served by gas pipelines and, although it has been much delayed, the controversial 55bn m3/yr Nord Stream 2 pipeline is expected to be completed in the next year.

However, a number of companies have plans to build LNG import terminals, which will provide additional competition at German gas hubs and diversify the country’s gas import slate away from its growing dependence on Russian pipeline imports. These accounted for 55% of Germany’s gas imports last year. The expected decline in Dutch gas production as the Groningen gas field is wound down means Germany faces increasing dependence on Russian gas, that being the cheapest.

The most advanced project is German LNG Terminal, which completed its engineering, procurement and construction (EPC) pre-qualification process in October and its EPC tender in December.

The terminal is to be sited on the Elbe river near Brunsbuettel close to the Kiel Canal, the port of Hamburg and the ChemCoast Park, providing opportunities to supply industrial customers and bunkering facilities. In addition to gas grid connection, LNG will be transported onwards by truck and rail.

German LNG Terminal is a joint venture of Gasunie LNG Holding, Oiltanking and Vopak LNG. The terminal is expected to have capacity of up to 8bn m3/yr.

However, German LNG Terminal may be overtaken by plans for a floating LNG terminal at Wilhelmshaven, which project developer Uniper – which by then is likely to be owned by Finland’s Fortum – hopes to have in place by 2023. The project is expected to have capacity of 10bn m3/yr.

Other proposals include a terminal at Stade, also on the Elbe river, which would be built by Australia’s Macquarie Group and China Harbor Engineering. Capacity would be 5-8bn m3/yr. Russian LNG producer Novatek and Belgium’s Fluxys also have plans for a small-scale 0.4bn m3/yr facility at Rostock, which would source LNG from Novatek’s Cryogas-Vysotsk LNG plant.

The government has expressed a willingness to support two LNG plant developments. As a result, Germany looks set to become an LNG importer in the early to mid-2020s just as it completes its nuclear phase out and makes its first big reduction in coal and lignite plant.