Despite limited growth in its own gas consumption, France is emerging as a major LNG import market. The country saw LNG imports, net of re-exports, almost double last year to 15.57mn mt/yr, according to data from GIIGNL, the International Group of LNG Importers. This represents an all-time high, with the country’s LNG terminals registering a utilisation rate of 63%, up from 40% in 2018.

The country typically takes only around 20% of its gas via its LNG terminals, the other 80% coming by pipeline, but low LNG prices have seen volumes of the shipborne fuel rise, displacing pipeline imports and allowing France to transit more gas on to other countries. When French gas transits, increased gas-fired generation and electricity exports are taken into account, LNG entering France is extending its reach into Europe via both pipelines and wires. 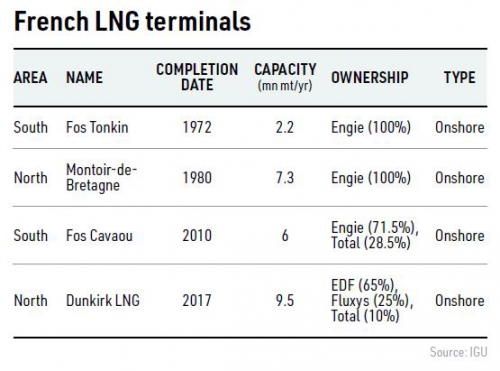 In 2018, France imported 13.1bn m3 of LNG and 36.8bn m3 of gas via pipeline, against domestic consumption of 42.7bn m3, implying about 7.2bn m3 of gas transits. According to gas network operator GRTgaz, gas transits nearly doubled last year with flows to Switzerland and Spain jumping by 72%.

Increased gas use in the power sector was the primary driver of gas demand growth in France last year, despite electricity consumption having been largely flat over the last decade. In 2019, electricity demand reached its lowest level in 10 years at 473 TWh, reflecting both greater energy efficiency and a growing tertiary sector at the expense of industry.

However, power sector gas demand rose 39%; public distribution declined 1% and industrial gas demand fell 2%. Electricity generation from gas jumped 23.8% in 2019 to 38.6 TWh, in sharp contrast to an overall drop in electricity supply of 2% to 537.7 TWh.

Nuclear generation fell 3.5% to 379.5 TWh, owing to lower fleet availability. Hydroelectric production was 12.1% down at 60 TWh, due to adverse weather conditions. 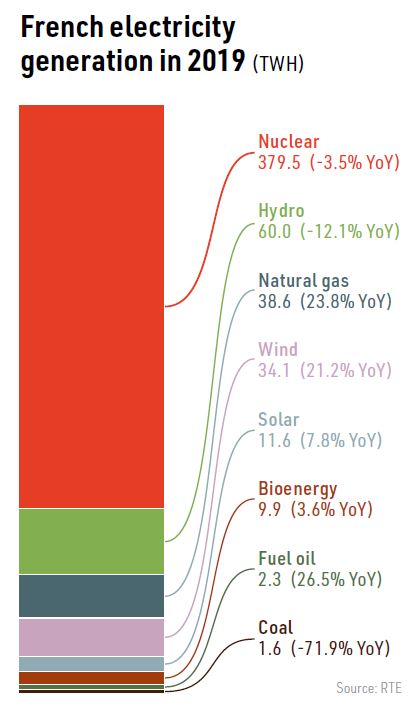 The already low level of coal-fired generation means that gas-to-coal switching opportunities have largely been exhausted. While some coal plants remain open, they are operating only sporadically. Moreover, on the demand side, growth in electricity consumption is expected to remain flat, certainly out to 2025, according to forecasts made by electricity system operator RTE.

This suggests that gas could now start to find its newly-larger share of the power generation market increasingly squeezed by renewables, particularly as France ups its offshore wind ambitions.

France has yet to build an offshore wind farm, but legal hurdles to their construction are being overcome and targets have gradually been raised. The final version of the Multi-Year Energy Programming (PPE) project, which was officially adopted in April, set a target of 6.2 GW for offshore wind by 2028. Onshore wind and solar power capacity are also expected to rise sharply.

However, there are other big variables at play. The nuclear sector is France’s main source of electricity generation, last year providing 70% of supply. Government policy is to reduce this share to 50% by 2035, which in effect means sourcing an additional 125 TWh from other technologies, assuming no growth in overall demand.

In its 2019 General Adequacy report, RTE identifies a problematic phase in the early 2020s following the closure of the Fessenheim nuclear reactors this year, the closure of all coal plant by 2023, and a still uncertain start to the troubled Flamanville European Pressurised Reactor, which is not now expected to come online until 2023, more than a decade behind schedule.

Moreover, the aging French nuclear fleet is set to enter a heavy period of maintenance, which means significant downtime and uncertainty, owing to the possibility of delayed returns.

RTE notes that other European countries are also in the process of closing down centralised power plant during this period, which could have implications for France’s electricity imports and exports. France is Europe’s largest exporter of electricity, sending and receiving power to and from the UK, Germany, Belgium, Switzerland, Italy and Spain. Net electricity exports in 2019 amounted to 55.7 TWh.

Longer term, GRTgaz, in its Perspectives Gaz 2018 report, sees gas demand either showing marginal growth or significant decline of up to 21%, with natural gas demand in particular reduced by a growing share of renewable gas. The three most variable elements in its outlook were the rise of demand for gas from heavy-duty transport, the increase in renewable gas supply and the number of energy efficiency refurbishments affecting residential and tertiary sector gas demand.