There is broad recognition that direct air capture (DAC) has an important role to play in addressing CO2 emissions. And momentum behind the technology is growing, with governments having committed nearly $4bn towards it since the start of 2020, while a further $125mn has come from private investors, according to the International Energy Agency (IEA).

There are now 18 DAC facilities in operation in Canada, Europe and the US, although they are only small in scale. The largest, a DAC mineralisation plant in Iceland that was brought online by Climeworks in September last year, has a capacity of only 4,000 metric tons/year. In 2024, however, Texan oil producer Occidental Petroleum and Carbon Engineering are due to launch the first large-scale plant, 1mn mt/yr in size.

DAC has several advantages over point-source capture, which has garnered far greater interest. First, it can be a way of offsetting emissions in hard-to-abate sectors, such as road and air transport, and other industries where, for one reason or another, point-source capture is not an option. While point-source addresses today’s emissions, DAC can address yesterday’s, potentially making up for the failure to miss past emissions targets.

Still, while recent progress has been notable, current and planned capacity is still negligible compared to what is needed for DAC technologies to play a meaningful role in a net-zero future. The IEA envisages in its Net Zero by 2050 Scenario that as much as 85mn metric tons of annual DAC capacity is needed by 2030, rising to 980mn mt/yr by the middle of the century.

A big source of investor unease is the high but also very uncertain cost of DAC technologies. They are more expensive than point-source methods, given that CO2 in the atmosphere is of course much more dilute than the CO2 emitted from industrial stacks. While CO2 concentration in the air is 410 parts/million, or 0.041 mol%, in flue gas released at gas-fired power plant stacks, for example, it is 4-8 mol%. At cement plants, another main target for point source capture, it is up to 33 mol%.

The costs are uncertain because DAC technology has not been demonstrated at scale, with estimates in the scientific literature ranging from anywhere between $100 and $1,000/mt of CO2. For solid DAC (S-DAC) technologies, the cost estimates vary between $100-600/mt of CO2, whereas for liquid DAC (L-DAC) technologies, even though they are more heat intensive, they range between $95-230/mt. The IEA puts the overall range at $125-335/mt of CO2.

Beyond the technology employed, costs also depend on the energy source used – for example natural gas or renewables – and how expensive that energy source currently is on the market. Another factor is whether the captured CO2 is geologically stored after being compressed at a very high pressure, adding cost, or put to use as a commodity, potentially generating revenue.

Economies of scale, a plant’s level of utilisation if it runs on intermittent renewable energy, the location and the carbon intensity of the energy source are other factors, and there are many more. 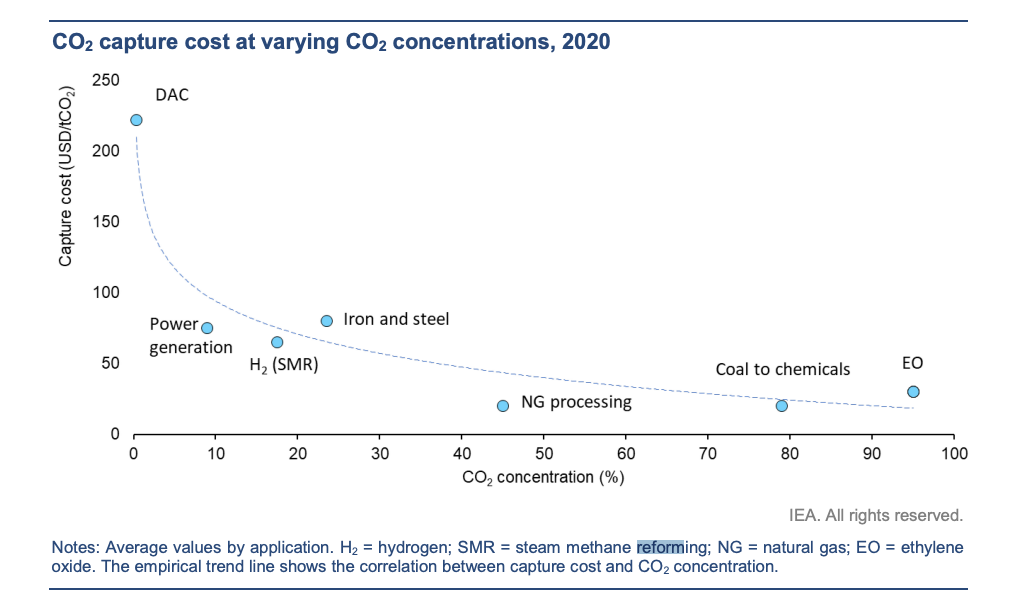 The good news is that the launch of Occidental’s Texas plant and other large-scale DAC facilities in the coming years will help do away with some of the cost uncertainty. And the IEA believes there is considerable potential for reductions in expenditure, the Paris-based agency states in its latest report on DAC, published earlier this month.

“Research has estimated that massive DAC deployment could substantially decrease its levelised cost of capture,” the IEA says.

The general industry target of $100/mt of CO2 would be low enough for DAC to compete with other mitigation options in some sectors, the agency says.

This is also the goal set by the US department of energy in November last year, and the aim is to bring the cost well below $100 within a decade. The IEA notes that even costs of between $200-250/mt of CO2 would already be low enough to make DAC technologies commercially attractive in some areas of the US, where project developers could secure carbon reduction credits. 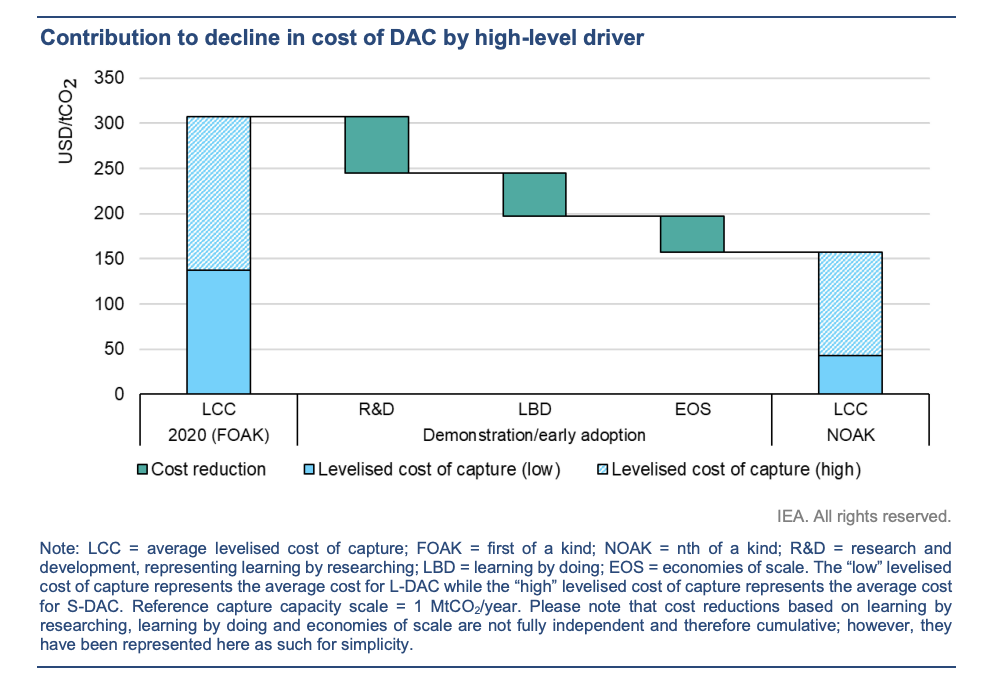 Cost reductions will be underpinned by a major expansion in DAC use, the IEA says. From the first prototype plants to mature plant models that are one of many, the agency estimates that costs could fall by 27% for L-DAC technologies, with 42% of saving relating to the cost of the air contacter alone.

“While this unit is based on commercial cooling-tower technologies, its expected cost reduction comes from a number of modifications to the standard commercial design, including packing geometry, allowing for cross flow exchange between solvent and air, and depth, reducing pressure drop and increasing packing wetting and therefore performance,” the agency explains.

As for S-DAC technology, the IEA cites industry research predicting a threefold to sixfold reduction in costs.

Improvements in performance are set to come mainly from innovations in the solvents that are used for DAC that lower energy consumption, and from technology spillovers from other sectors and applications, the IEA says. And further cost cuts can be achieved through economies of scale and “learning by doing.”

In particular, the IEA cites research from the Massachusetts Institute of Technology that shows that emerging separation technologies could need 90% less energy per mt of CO2, thanks to innovative ways that solvent can be regenerated at low to medium temperatures, and the use of different CO2 separation technologies. Through “learning by doing,” energy sector technology costs on average fall by 10-15% through increased deployment, and in the case of some technologies like solar PV, reductions of 20% have been achieved.

As for economies of scale, mass production of particular pieces of equipment and those pieces being manufactured larger in size, bring about cost benefits. Regarding technology spillover, the IEA notes that DAC has already benefited from innovations in other sectors, including more traditional amine-based carbon capture utilisation and storage, low pressure drop configurations developed in the automotive industry for catalytic converters, and from electrochemistry.

“While technology spillovers are typically unexpected and therefore difficult to predict, performance optimisation of CO2 separation solvents in any industrial application would greatly benefit DAC,” the agency explains. “Unfortunately, there is no consensus on how to quantify technology spillovers, due to the complexity of the interactions among different sectors.”