Much of the time it is taken as given that existing power networks, with a small tweak here or there, can handle new loads. Here, for example, is National Grid, the UK high-voltage grid operator, strutting its stuff on electric vehicles (EVs). 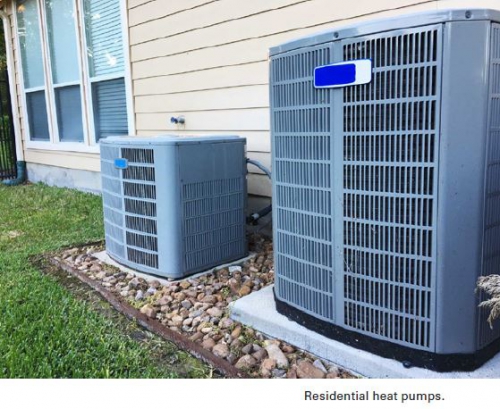 From the point of view of National Grid, a transmission system operator, EVs don’t present a big problem. But when you combine EVs with heat pumps and start looking at distribution networks, a new picture emerges.

What follows summarises the work undertaken by our consultancies PWR and Challoch Energy covering the impact of these new loads on electricity distribution networks. The work shows a network re-build will be required on much of the network once heat pumps and electric vehicles have penetration levels above 10–20%. As an alternative, the existing natural gas networks when re-purposed for hydrogen and used to supply domestic fuel cells can provide a complementary system to allow more heat pumps and EVs to be deployed without major network reinforcement.

The first step in the modelling exercise was to analyse the energy demand of houses with different levels of thermal insulation. The European Commission has regularly criticised the poor energy performance of the European housing stock. As part of the re-cast 2018 Energy Performance of Buildings Directive the EC has estimated that there are at least 250 million dwellings and 7 billion m² of non-residential buildings in need of radical energy renovation.

Reflecting the heterogeneous nature of any stock of buildings, nine levels of energy performance were modelled for the purposes of calculating heat demand. The modelling was based on three main factors: cavity wall insulation/not, loft insulation (two thicknesses) and double or triple glazing. A HH1-class house has no cavity insulation, basic double glazing and thin loft insulation. By contrast, HH9-class featured outside cladding, triple glazing and max loft insulation (HH9-class). The difference in energy demand between HH0 and HH9 for the same size house was more than 50%, reflecting real-world experience.

For the purposes of this particular simulation a population of 250 houses supplied by a single 500 kVA transformer was assumed. All the houses were assigned an energy performance of HH7 (full loft insulation, modern double glazing and full cavity wall insulation) and a size of 100 m2. The simulation used hourly temperature date for the whole of 2014 from Beauvechain in Belgium.

However, the model can accept any temperature data. Beauvechain was chosen because it is not close to significant “heat islands”. Household electricity demand of 4,100 kWh per year was used based on a composite half hourly demand profile (France, Germany, UK) with five seasonal profiles and three weekly profiles (weekday, Saturday, Sunday). This provided base data on which to add heat pump load and electric vehicle charging.

Heat pumps were sized for a 100 m2 house with a target inside temperature of 20°C. All the heat pumps were assumed to be air-source. This was done because ground source heat pumps are more suitable for new build and air-source tend to be deployed in renovated properties. Domestic hot water provision was included in the calculation of heat pump load together with a de-rating of the co-efficient of performance (COP) to reflect the fact that as outside temperature declines so does the heat pump COP.

This is a very important factor in winter and means that at low temperatures heat pumps have to work harder and thus consume more electricity. Furthermore, as the thermal efficiency of a dwelling improves, so the energy needed for the provision of domestic hot water becomes significant.

In the case of electric vehicles, there are two basic modes of use: EV at home in the day (used for local trips) and EV parked somewhere else (station or office). In the case of the latter there is the possibility to charge the vehicle, or not.

Charging at home is assumed to be done in the period 22h00 through to 06h00. 80% of vehicles were assumed absent in the day, with a 50/50 split between charging and not charging. Average distance travelled was 60 km and a composite figure of 0.2 kWh/km taken as the power consumed by an “average” electric vehicle (based on an analysis of 12 models of EVs). 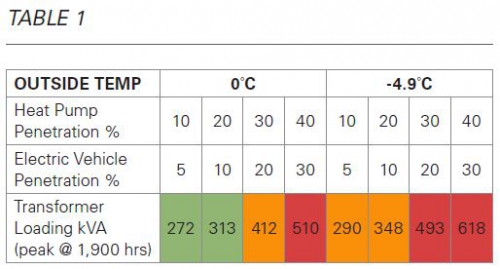 Table 1 shows the situation for two temperatures: 0 °C and -4.9 °C and of course, temperatures lower than -4.9 °C are quite common in winter. Thus, this temperature could be considered to be somewhat optimistic.

Table 2 shows how the introduction of hydrogen-powered fuel cells lowers demand on the local transformer. In the case of an outside temperature of 0°C the previously overloaded situation (HP – 40%, EV 20%) has been reduced to “well-loaded”. 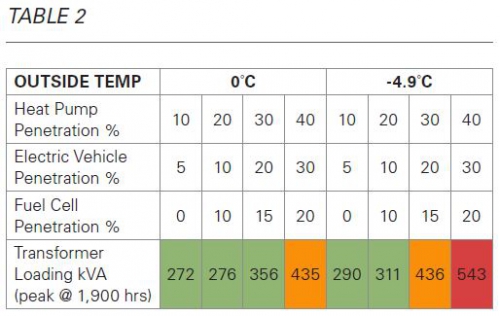 As temperatures get lower (-4.9°C), an overload situation still occurs. If fuel cell penetration is raised to 35% this overload is eliminated.

It is worth noting that at this point – with 40% heat pumps and 35% hydrogen-powered fuel cells – around 75% of domestic heat has been decarbonised for the 250 households modelled, without massive network reinforcement.

What the modelling shows is that electric vehicle charging becomes a problem once penetration levels go past 20%. Peak demand shifts to 22h00 (rather than 19h00). There is no doubt that staggered charging as a function of each EV’s state of charge (SoC) using local network control (autonomous networks) would reduce this peak, and this may be needed if EV penetration is in excess of 50%, which is starting to look like a credible scenario.

Fuel cells powered by hydrogen have an important role to play in the decarbonisation of residential heat. It is not a competition between heat pumps and fuel cells, rather both have a role to play.

That said, as it now stands, absent fuels cells, it is most definitely a competition for network space between heat pumps and home electric vehicle charging. When that network space runs out, the choices will be:

It is worth adding that time shifting some demand makes no difference to what finally happens on the network. Once heat pumps and EVs achieve any reasonable level of penetration (30% and 20%) the network is in trouble, load shifting cannot help. The installation of PV likewise can do nothing to help out ……in winter at 19h00.

The PWR-Challoch Energy model can simulate an almost infinite number of combinations in terms of house types, house numbers, HP, EV and fuel cell penetrations, as well as the impact of PV in the summer, the role of battery storage and local electrolysers.

Mike Parr and Simon Minett are the founders of Green Hydrogen for Europe. They have both been active in energy for more than 30 years. Parr is a specialist in power system engineering, Minett is an expert on renewables, CHP and energy efficiency policy and deployment. The focus of Green Hydrogen for Europe is on promoting the fast development of hydrogen produced only from renewable electricity.