Colombia recently wrapped up months of preparations and rolled out its long-term plan for the transition to hydrogen as its main source of fuel.

Government officials unveiled the programme, known as the Hydrogen Roadmap, at a ceremony on September 30. They did not reveal full details of the plan on that date, but they did say that Bogota intended to make the switch from fossil fuels to hydrogen in three stages, each about a decade long. This gradual approach will give the country time to establish a viable hydrogen economy and time to develop the renewable generating capacity needed to ensure drastic reductions in CO2 emissions, they said.

The decision to take the transition slowly makes sense. After all, Colombia is starting virtually from scratch; it has little in the way of a hydrogen economy, and its installed wind and solar generating capacity amounted to less than 100 MW as of the beginning of 2021. It is hoping to raise that figure to more than 1,000 MW by the end of the year and will build more solar parks and wind farms in 2022 and beyond, but it is still not ready to start phasing fossil fuels out. 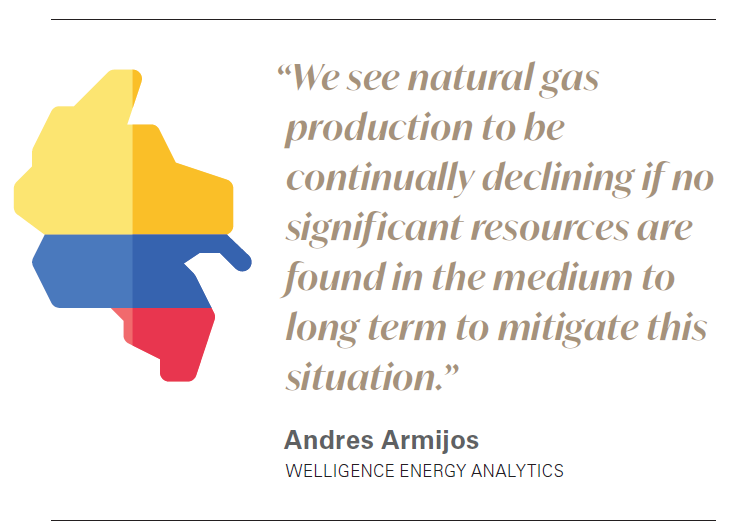 Time and preparedness are not the only factors in play, though. Bogota also appears to be motivated by the desire to optimise the use of Colombia’s natural gas resources. This is evident in the fact that the Hydrogen Roadmap’s first stage focuses almost exclusively on the manufacturing of blue hydrogen – that is, hydrogen production based on fossil fuels such as natural gas and paired with carbon capture and storage (CCS) solutions to minimise greenhouse gas (GHG) emissions.

In practical terms, what this means is that domestically produced gas will help build the initial foundation for Colombia’s hydrogen economy. That is, gas will be one of the main inputs needed for production of hydrogen via steam methane reforming during the first phase of the Roadmap, which will run from 2021 to 2030. (Coal will also play a role, as coal gasification can produce blue hydrogen in combination with CCS.)

As such, gas will not start to fade into the background until the second phase (2031-2040), which will see the country shift to solar- and wind-powered green hydrogen. And only in the third phase (2041-2050), will gas-driven blue hydrogen take a back seat to green hydrogen, which involves using wind or solar energy to run electrolysers capable of splitting water into hydrogen fuel and oxygen gas.

This gas-first approach has won praise from Felipe Bayon, the head of Colombia’s national oil company (NOC) Ecopetrol. Following the roll-out of the Hydrogen Roadmap, Bayon said the decision to make the switch to hydrogen in stages would benefit the country. “Blue hydrogen [can] serve as the base to start expanding the hydrogen value chain in Colombia to the large-scale competitive development of green hydrogen,” he said.

The Inter-American Development Bank (IADB), which helped Colombia’s Ministry of Mines and Energy draw up the Roadmap, concurred. In a blog post on its website, the bank described blue hydrogen as a “low-emission alternative for the progressive transition of the country’s mining and gas sectors, while taking advantage of the large gas and coal reserves and expert know-how of the Colombian industry.” It added that blue hydrogen had the potential to be a “foundation to create and grow the hydrogen supply chain and market until green hydrogen is competitive and can take over.”

But there are serious drawbacks to this focus on gas. First and foremost, if current trends persist, the amount of gas available for blue hydrogen production in Colombia looks set to go down, rather than up, over the next few years.

There are several reasons for this. On the demand side, Colombian gas consumption has been rising steadily since 2015, according to the latest edition of BP’s Statistical Review of World Energy. BP’s data show that consumption averaged 1.344bn ft3 (38mn m3)/day in 2020, up from 1.301bn ft3 (36.8mn m3)/day in 2019 and 1.278bn ft3 (36.2mn m3)/d in 2018. This is roughly in line with the assessment of Canada’s Canacol Energy, the largest independent producer working in the South American state, that Colombian gas consumption is rising at the rate of about 3% annually.

Some of the increase is a consequence of drought, which has reduced the volume of electricity produced by hydroelectric power plants (HPPs) and made gas-fired generation more attractive. But consumption rates are also on the rise as a result of the government’s efforts to reduce air pollution, especially in major cities such as Bogota and Medellin, and uphold its commitments under the Paris Agreement.

Running out of gas

Under these conditions, Colombia faces the prospect of seeing its domestic gas reserves run out before the end of the decade. If so, the country will not have all the gas it needs to focus on blue hydrogen production to the extent envisioned in the Roadmap unless it becomes an importer – or unless it makes some new discoveries.

Andres Armijos, the head of Latin America research at Houston-based Welligence Energy Analytics, recently acknowledged that Colombia’s gas sector was under a significant amount of pressure. “We see natural gas production to be continually declining if no significant resources are found in the medium to long term to mitigate this situation,” he tells NGW.

Officials in Bogota have indicated that they hope the country’s gas sector can make up for some of its past losses through exploration and development of new offshore fields. Energy minister Diego Mesa said to Bloomberg in July 2021, for example, that the government had high hopes for upcoming offshore drilling campaigns by international oil companies (IOCs) and for this year’s bidding round, which covers more than 30 blocks.

Armijos was less optimistic, however. Overall, he said, IOCs are likely to be more interested in the onshore blocks that the National Hydrocarbons Agency (ANH) has included in Round 2021 than in offshore sites in frontier basins. The disappointing results of Brazil’s 17th Bidding Round, held on October 7, appear to show that oil and gas operators – including the select few companies with extensive offshore capabilities – are cautious about offshore investments, he commented.

“The ANH is having its Round 2021 this year, which includes some offshore blocks which they hope will bring more IOCs into the country. However, the list of qualified companies shows independents that are likely only interested in the onshore acreage on offer,” Armijos says. “Having seen some recent results for other offshore exploration rounds in the region…and their results, there is tempered interest in frontier and offshore exploration blocks. This is an industry sentiment. Plus, only a relatively select group of companies can operate offshore.” 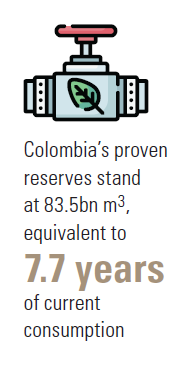 Armijos also takes note of the Colombian government’s efforts to promote the gas sector. He pointed out, though, that officials in Bogota had not made much of an effort to support upstream exploration and production work. Instead, he said, they have focused on demand by offering tax incentives to consumers and end-users, including blue hydrogen producers.

“We have seen some talk from the deputy minister of energy [Miguel Lotero] of potential incentives for the natural gas E&P sector, but there is nothing out yet,” Armijos says. “On the other hand, there have been numerous incentives already brought forward on the demand side (incentives for the increased use of natural gas in many ways, power, vehicular, residential, etc.).”

In short, offshore exploration and development is not necessarily Colombia’s best option for increasing its gas reserves in order to support blue hydrogen production. But the South American country may not have many other alternatives. Officials in Bogota have talked about opening up unconventional gas fields for development, but legal challenges and social opposition have the potential to prevent this idea from gaining much momentum during the first phase of the Hydrogen Roadmap, when demand for gas will be strongest. As such, Colombia might want to start looking at options for importing gas before the end of the decade.