An LNG cargo carries with it not just the concentrated energy of liquefied gas, but a big parcel of cold energy. Chilled to -162°C for economic transportation, this temperature must be maintained in the specialised tanks onboard an LNG carrier (LNGC) until arrival at the receiving terminal.

The LNG is then pumped into storage tanks before vaporisation and transmission as natural gas directly to consumers or into a distribution grid.

Vaporisation usually involves using seawater or air to heat up the LNG, although waste heat, if available, and gas burners, can also be employed. The temperature difference between the super-cooled LNG and the ambient environment is large, but the cold energy embedded in the LNG is generally lost in the process, dissipating into the environment.

Liquefaction consumes a considerable amount of energy usually provided by burning gas to generate electricity to run compressors. This gas could otherwise be liquefied and burning it for power creates CO2 emissions.

The latest generation of LNG plants are going ‘all-electric’, sourcing power from the grid. If the electricity supply is renewable, this will reduce LNG’s carbon footprint and increase the amount of feedstock gas for liquefaction. An example is the under-construction LNG Canada plant, which will source much of its power from Canadian electricity utility BC Hydro.

Nonetheless, whether natural gas or renewable electricity is used as the primary source, significant energy is expended in the process – 2,900 kJ/kg of LNG, according to the paper Thermodynamic and heat transfer analysis of LNG energy recovery for power production. The majority of this energy, about 2,070 kJ/kg, is dissipated as heat, but the remainder, 830 kJ/kg, becomes ‘cold energy’ and is transported to the receiving terminal embedded in the liquefied gas.

According to the study, about 0.23 kWh/kg of this energy could theoretically be recovered. As the throughput of LNG terminals can run to millions of metric tons/year, this is a significant amount.

Moreover, while carbon emissions may have been generated in producing the cold energy, there need be no further emissions relating to its recovery. Any cold energy recovery, regardless of the energy source used in the liquefaction process, should result in lower carbon emissions across the LNG supply chain. 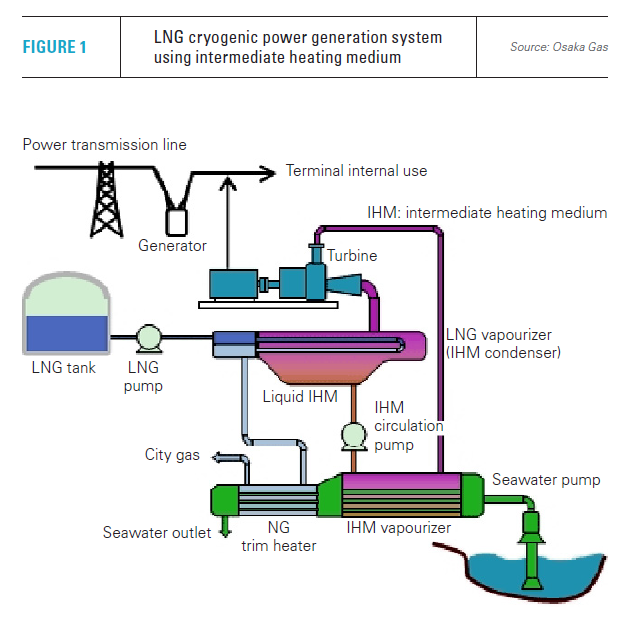 The direct economic benefits of cold energy recovery accrue to the terminal owner and associated industries, depending on the cold energy use, but the carbon benefits are in a sense a common good, aiding both consumers and producers’ decarbonisation efforts.

Much research has focused on cryogenic power generation, which has looked at various methods such as direct expansion cycle, Rankine cycle, gas expansion cycle (Brayton cycle) and combined cycle systems. These all involve a thermodynamic cycle using the LNG as the cold ‘side’ and ambient or higher temperatures as the hot side.

The reason for the focus on cryogenic power generation is that the electricity produced can offset terminal power consumption or be transmitted to other users by wire, while there may not be suitably located industries which can make use of other cold energy recovery options. Air separation is another popular choice as the cryogenic liquids produced can easily be transported to customers.

In a direct expansion cycle, the LNG is regasified through an evaporator by seawater and the vapour produced is used to drive a turbine. This is a simple system, but the gas pressure falls to levels only suitable for local gas distribution and only a relatively small amount of the cold energy is recovered.

An alternative method is a Rankine cycle which uses an auxiliary fluid as the expansion medium. The auxiliary fluid is condensed by the LNG, which is then pumped to an evaporator heated by seawater and then passed to a turbine to generate power.

In this case, the LNG does not expand and the send-out pump can be set to the required pipeline pressure, allowing long-distance transportation of the gas.

Japan has led the way in developing cryogenic power generation in combination with its many LNG terminals. Osaka Gas started operation of its first unit with power output of 1,450 kW as far back as 1979 at the Senboku 2 LNG terminal, but globally the installation of cold energy recovery facilities has been seen as a fairly limited opportunity.

A study, Cold Energy Recovery Performance Study for Liquefied Natural Gas (LNG) Regasification Process, published in 2020, based on data from the 3.5mn mt/yr Pengerang regasification terminal in Malaysia, estimated potential cold energy recovery at about 43 MW with the efficiency of the open rack vaporiser system considered at 60-95%. Vaporiser efficiency depends largely on the flow rates of LNG and seawater, the study found.

The report used a value of 200 kWh of cold energy produced in the regasification of 1 mt of LNG and was based on six months of continuous data collection.

There was considerable range, from 1.7 MW for the under-construction 0.5mn mt/yr Niihama LNG terminal in Japan to 6.5 MW for the recently completed 1.9mn mt/yr Krk facility in Croatia. Potential at the 22mn mt/yr capacity Kuwait Permanent LNG Import Facility, which received its first LNG cargo in July, was estimated at up to 75 MW.

Regasification does not take place only at coastal regasification terminals. The onward transportation of LNG by truck and rail means that LNG (and the cold energy) is travelling further inland. Even though trucks have much smaller volumes than LNGCs, they may still offer recovery options. 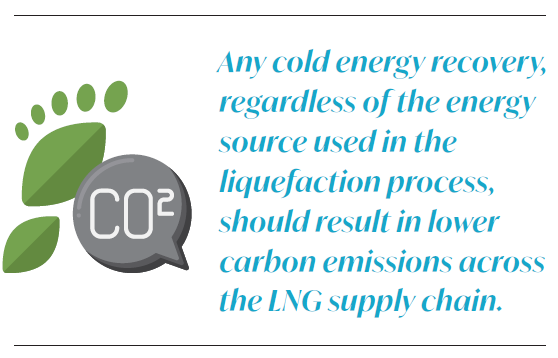 Some companies have proposed mobile recovery systems, which transfer the cold energy from LNG to a higher temperature coolant or fluid. A drawback is that demand for the cold energy, for example refrigeration, and natural gas are often not in the same place and they can be hard to coordinate both geographically and in time to create a high efficiency system.

UAB Valcon estimates cold energy recovery of between 0.77-3.51 MWhe from a single LNG truck, depending on the temperature of the LNG.

Power generation is not the only possibility and not necessarily the most economically viable. A study published in the Indonesian Journal of Science and Technology last year, Optimization of LNG Cold Energy Utilization via Power Generation, Refrigeration, and Air Separation, looked at cold energy recovery for power generation, the propylene refrigeration cycle and air separation.

It found that air separation yielded the highest profit. The study was based on Malaysian state oil and gas company Petronas’ 3.8mn mt/ye LNG terminal at the Melaka Refinery Complex in Malaysia.

In air separation, the LNG is used as a cooling medium for the air pre-cooler to reduce temperatures to about -150°C. The cold air intake allows the Air Separation Unit (ASU) to run on minimum power, reducing costs and emissions.

Propane is employed as a refrigerant in a number of chemical applications. For a propylene refrigeration cycle, the LNG is used to bring the warmed propylene back to lower temperatures (-35°C) for reuse without the aid of an energy-intensive compressor.

The study found that any cold recovery use had to be within 10 km of the LNG terminal to minimise pipe outlay and energy losses from pipeline transmission.

Other studies suggest new ways to use LNG’s cold energy. One, Progress of liquefied natural gas cold energy utilization, published in 2019, says LNG use in ASUs leaves the LNG at a temperature of about -100°C, which means much of the cold energy has not been recovered.

LNG use in freeze seawater desalination faces a similar problem in that the cold energy temperature use region is -2°C, the point at which seawater freezes, compared with the much lower temperature of LNG. The mismatch in temperature use is a problem with many applications, including cryogenic power generation and cold storage, limiting cold energy recovery.

A potential solution proposed by the authors is to use LNG as a coolant for LAES. Based on traditional compressed air energy storage, LAES involves cooling the air until liquefied, which increases storage density, reducing storage volume and enabling atmospheric pressure storage.

To date, cryogenic power generation and ASUs are the most widely used applications for cold energy recovery, but many LNG terminals have ignored the possibilities altogether. As the impetus to lower LNG’s carbon footprint intensifies, wider deployment of, and novel approaches to, cold energy recovery, look like a promising means of environmental performance improvement.