At present, few countries require producers to either pay a carbon tax or participate in an emissions trading scheme (ETS). But as governments seek to meet decarbonisation targets, that could soon change. Carbon charges are likely to come, and they will transform the upstream sector, affecting both asset values and the industry’s economics.

Graham Kellas, Wood Mackenzie's senior vice president, global fiscal research, said: “Governments have two options for imposing carbon charges on upstream operations. They can either levy a carbon tax, which is a fixed tax rate is applied to all carbon dioxide emissions, or implement an ETS. Under both schemes, the financial impact on specific projects can potentially be mitigated by an emissions allowance.”

More than 60 carbon charge regimes currently exist at international, national and subnational levels, but very few affect major oil and gas producing areas at a rate above $20/metric ton. Norway is the standout country for upstream carbon charges: as well as having levied a tax on CO2 since 1991, it is a member of the EU’s ETS. The EU scheme, in which the UK also participates, is the world’s largest and most active.

North America’s first carbon tax for large oil and gas producers was established by the Canadian province of Alberta in 2007. British Columbia implemented a similar tax in 2008, with the Canadian federal government introducing a levy in 2019. Last year, the Canadian government announced its carbon tax rate would rise to the equivalent of around $135/mt by 2030. US President Joe Biden’s green agenda is making carbon charges for upstream operations in the US far more likely.

Norway’s new carbon plan aims to reduce emissions from sectors such as waste and agriculture, which are not already exposed to carbon taxes. However, oil and gas producers will be affected too.

“The changes will increase carbon taxes to almost $2bn/year by 2030, and would make up around $2/barrel of opex, similar to transportation tariffs. This could increase up to $10/barrel of oil equivalent at more mature fields.”

She added: “As a result, the implications for asset and company value are minimal. We believe asset valuations would fall by about 1% ($1.4bn), though company value could fall by up to 5% for those with more mature, high-carbon portfolios.”

While cessation of production may be brought forward at some Norwegian fields, the impact on recovery is limited. WoodMac’s research indicates less than 50mn barrels of oil equivalent would be left in the ground.

McKenzie added: “Our analysis shows that the fiscal treatment of carbon taxes is arguably more important than pricing. A US$262 per tonne carbon price in other parts of the world would have more serious implications.”

Kellas said producers have been including carbon pricing assumptions — usually between $40-100/mt — in their financial models for some time.

His analysis indicates that at $40/mt, most asset values are relatively insensitive to the carbon charge, although even that rate could wipe out the remaining value of some assets. But at $200/mt – a lower rate than Norway is proposing for 2030 – a third of all assets would have at least 50% of their remaining value transferred in carbon charges. 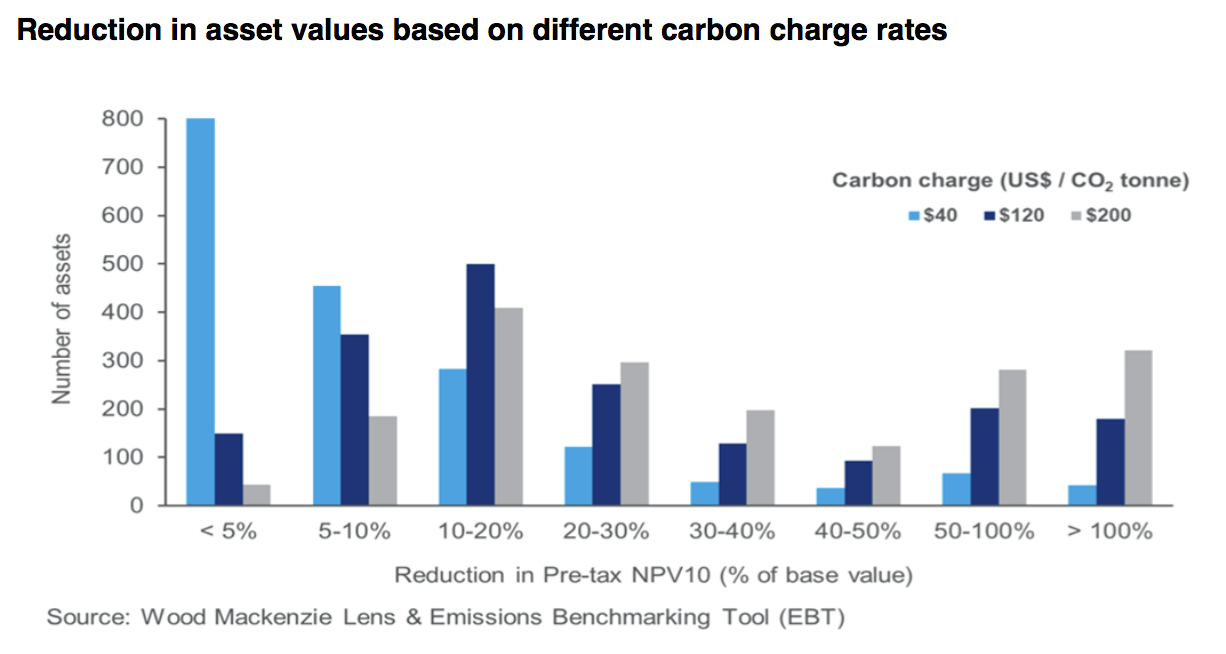 He said: “These figures assume all emissions are subject to any carbon charge. Actual exposure will be lower, depending on each government’s willingness to offer emissions allowances in the form of free emissions credits. This is the most important measure governments can use to modify carbon charges, thereby safeguarding asset values and lessening the impact on investment in the sector.”

The other principal instrument to soften the impact of carbon charges is the ability to offset these against other payments to government.

“While mitigating the impact of carbon charges is possible, it will be complicated to achieve in many jurisdictions,” Kellas said.

“Countries with fiscal regimes including royalty, which is levied on gross revenue and does not allow deduction of operating costs, will be at a disadvantage relative to those with tax-centric systems. And for upstream operations governed by production sharing contracts mitigation will be even more complex.”