A looming ban in the US on trading shares of China’s Cnooc might be just the beginning of trouble for the national oil company, as further escalations could see it delisted from the New York stock exchange or even shut out of the US financial system.

The US ministry of finance confirmed in new guidelines late last year that American investors will be barred from trading shares of Cnooc and its subsidiaries, as well as any index funds that list securities issued by any of its units, from the start of February.

Cnooc itself is not listed, but it is the controlling shareholder of two publicly-traded subsidiaries – Cnooc Ltd and China Oilfield Services Ltd (COSL). Cnooc Ltd handles exploration and production in China and overseas, while COSL provides offshore oilfield services such as well drilling and geophysical prospecting.

The confirmation came a month after the US Department of Defense added Cnooc to a blacklist of companies allegedly owned or controlled by China’s military. The blacklisting by the Pentagon exposed Cnooc to the risk of US sanctions under an Executive Order (EO) signed last November by outgoing president Donald Trump, which imposed restrictions on companies identified as affiliated with the People’s Liberation Army.

At the time it was unclear if Cnooc Ltd and COSL would also be affected by the restrictions. The Treasury’s guidelines have made clear they are also included.

Cnooc Ltd will be the more impacted as it has American Depositary Receipts listed in New York. Shares of Cnooc Ltd in Hong Kong have declined by nearly one-quarter since the Pentagon announced the blacklisting on December 3. US shareholders started selling their positions in the face of the higher political risk. 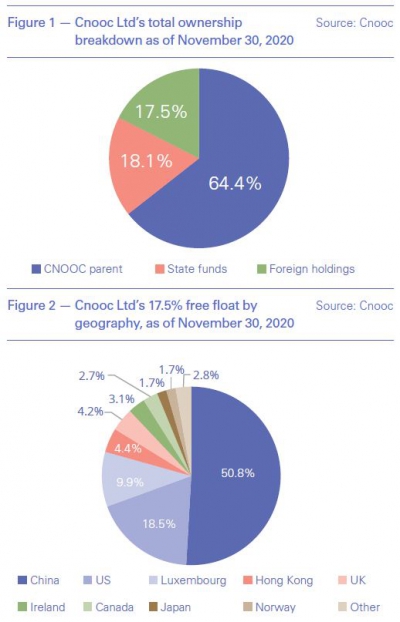 Foreign institutional investors owned 17.5% of Cnooc Ltd at the start of December (Figure 1) before the blacklisting was confirmed – making it the most widely-held Chinese oil company by international shareholders, ahead of PetroChina and Sinopec. Of this free-floating share, US investors held 18.5% (Figure 2).

There is no sign for now that its two larger peers, CNPC/PetroChina and Sinopec, will also be blacklisted – although the market view is that they could be potentially targeted too.

There were signs before Cnooc’s addition to the blacklist that it was anticipating and preparing for US government sanctions. Cnooc Ltd convened an extraordinary general meeting on November 20 – a mere 10 days before international media first reported the sanctions – where it changed its articles of association to soften the possible impact of sanctions.

The highly coincidental change to the articles permitted Cnooc to compete in offshore China against Cnooc Ltd, and for the latter to have the right to sell assets to the parent. The unusual move was widely seen as a mitigation plan in the event of escalating tensions with the US.

The Pentagon did not explain why Cnooc has been added to the blacklist, while there is no activity explicitly taking place presently that would provide a reason. But NGW understands the likeliest reason is because of Cnooc’s past activities in the South China Sea, which is believed to be rich in energy deposits and marine resources but carries major geopolitical risk from numerous maritime border disputes.

Beijing claims most of the South China Sea based on its so-called nine-dash line, but many of its Asia-Pacific neighbours – including Taiwan, Vietnam, the Philippines, Malaysia and Brunei – have opposing claims to different parts of the sea and its offshore resources. Cnooc is the only Chinese operator in the South China Sea: the listed subsidiary Cnooc Ltd increased production from the area in the first nine months of 2020 by 13.3% year-on-year to 123mn barrels of oil equivalent (boe).

The US has previously accused China of using state-owned firms to develop China’s interests in disputed waters off the South China Sea. While Cnooc Ltd has no E&P assets in disputed waters, the parent company has engaged in some activity, as has COSL’s deepwater drilling rig, the Haiyang Shiyou 981.

In 2014, Cnooc deployed that rig to drill two wells in the South China Sea near the Xisha islands – which Vietnam alleged was a provocation. The move sparked a dangerous stand-off between the two countries, kicking off nationalist protests in both countries and sparking clashes between Vietnamese and Chinese fishing vessels and coastguard ships around the site of the rig.

The fallout from Cnooc’s addition to the US security blacklist is likely to remain limited to trading of its listed subsidiaries so far. But there is the growing possibility that Cnooc Ltd will be forced to delist from the New York stock exchange, as the US government has already targeted other Chinese companies – such as the big three telecommunication network operators – for removal.

Cnooc also remains at risk of more punishing sanctions. The worst-case scenario is a ban on access to US dollar-denominated financing through US institutions, which would cripple the company significantly given most of its global transactions are conducted in US dollars. This move would deal an existential blow to Cnooc by effectively shutting it out of the US financial system. While the US has been reluctant to use this tool with other companies to date, it is something that cannot be completely ignored.

A less severe escalation would be sanctions on US individuals or companies doing business with it. Last year the US added 24 Chinese companies to a trade blacklist for helping China build islands in the South China Sea, barring companies for exporting products to targets without a government licence. The list includes companies such as the China Construction Company which is been an active contractor in the South China Sea.

The implications would still be problematic for Cnooc. International production accounts for around 40% of the company’s production and investment, so any decision to restrict US companies or persons from doing business with the NOC would seriously damage the viability of such operations. American oilfield service providers such as Schlumberger, Halliburton and Baker Hughes would be barred from working with Cnooc for critical oilfield services, making it totally dependent on its less-competent COSL subsidiary.

Partnerships between Cnooc and US companies – such as the successful team-up with ExxonMobil in Guyana – would cease to be functional without an exemption. This would effectively shut Cnooc out of many international joint ventures where having a China partner would be problematic.

The clearest analogue to such a move for Cnooc would National Iranian Oil Company (NIOC) after US sanctions last year effectively put the company’s international projects with western partners on hold. US companies or persons cannot have direct dealings with Iranian companies without special dispensation from the US Office for Foreign Asset Control (Ofac) – a restriction that has affected American and other energy companies, service industry, equipment makers and financial institutions.

Sanctions have disrupted NIOC’s operations for the past decade. One example of this was at the Rhum offshore gas field in the UK North Sea that is 50% owned by NIOC. The field first started producing in 2005, but had to be shut from 2010 to 2014 as production at the time could have violated US/EU sanctions on Iran. The current sanctions waiver – which has to be renewed annually by Ofac – entails placing Iranian revenues in an escrow account.

Cnooc has the largest overseas footprint of China’s three national oil companies with operations in 19 countries including the US, Canada, UK and Brazil (Figure 3). The biggest threat of additional sanctions would be to key projects in Brazil, Guyana, the US Gulf of Mexico, Novatek’s Arctic LNG 2, and the UK North Sea – all of which are overseas operations where it would become more complicated to operate with US counterparties.

Cnooc has several minority shares in upstream assets in the Gulf of Mexico through its listed subsidiary that could be more difficult to maintain under US sanctions. Cnooc Ltd had 23.8mn boe of US production in the first nine months of 2020 that accounted for 6% of its total production of 389.1mn boe. That said, the earnings impact would be relatively minor as the margin and profitability of Cnooc’s US volumes are lower than that of offshore China.

But analysts say these additional sanctions remain remote for now, partly because shifting priorities and US energy independence have made energy less of a strategic concern. In 2005, Cnooc abandoned its bid to acquire US oil producer company Unocal following pressure from a US government that did not like the idea of a Chinese company taking over an American energy producer.

Sixteen years later, oil and gas is much less sensitive and strategic of an issue for the US than technology, the Internet and 5G—which the US has sought to target.

The decision to hit Cnooc rather than a more obvious political target such as its far larger peer, PetroChina, suggests also that Washington does not want to cross red lines and take overly drastic actions. Furthermore, punitive sanctions on Cnooc would be potentially very damaging to US entities already working with the company, such as ExxonMobil offshore Guyana.