Spurred by reforms that have carved open the country’s vast pipeline network to more competition, they have been looking abroad for competitively priced supplies.

Novatek announced a 15-year gas sales and purchase agreement (SPA) to supply Shenergy Group with more than 3mn metric tons over the contract’s duration from its Arctic-2 LNG project. It said the Chinese market “is one of the key regions in our LNG marketing strategy, and we plan to further increase our supplies of liquefied natural gas to this country.”

The SPA is Shenergy’s second in the past several months after the state-owned company – which has a monopoly on supplying gas and power in China’s biggest city, Shanghai – inked a 15-year SPA with the UK’s Centrica for 0.5mn mt/yr starting in 2024.

The formation of China Oil & Gas Pipeline Network Corporation (PipeChina) has opened up the gas market and is prompting smaller local buyers to get involved in LNG procurement. The majority of China’s midstream gas assets are now consolidated in PipeChina, and the state-held company has moved to accelerate gas infrastructure commissioning and connectivity.

PipeChina has also been in a hurry to open up third-party access to 10 out of the 22 LNG terminals in China that it controls – six of which are operational, with the remaining four under development. The company announced late in January that 54 companies – including IOCs BP and Shell – had been shortlisted for third-party terminal access, down from 82 original applicants, but no update has been provided since then.

China’s gas companies, utilities and other private players accounted for 83% of total Chinese buyer contract signings last year, a major increase from a 26% share in 2019, according to company announcements and press reports compiled by NGW. In total they made up 4.76mn mt worth of LNG contract supply, compared with the 1mn mt/yr SPA that Sinopec signed with Qatargas – the only deal completed by one of China’s three NOCs in 2020.

The NOCs did most of the heavy lifting in previous years. In 2018 PetroChina, Sinopec and Cnooc signed up for 11.3mn mt compared with no supply agreements by gas suppliers or utilities. In 2019, the three NOCs inked agreements for 7.79mn mt, versus 1.7mn mt for gas suppliers and 1mn mt for utilities.

The strong buying interest among China’s lower-tier gas firms dovetails with bullish forecasts for Asian LNG demand at IP Week in late February. ExxonMobil – which has invested in an under-construction terminal in southern China – expects Chinese demand growth to be robust this decade, on the back of a relaxation in domestic gas market regulation, infrastructure buildout and the establishment of more internal gas trading hubs, the US major’s China gas marketing president Tze San Koh said on a panel at the conference.

Last year independent players Foran Energy Group and ENN Group signed contracts with BP for 10 years starting 2021 for 0.3mn mt/yr each. Foran Energy also entered into a non-binding deal known as heads of agreement with Cheniere Energy for 26 cargos over a five-year period starting this year.

In addition to its SPA with Centrica, Shenergy signed a HoA with Malaysian NOC Petronas for around 1.5mn mt/yr over 12 years, while Guangdong Energy Group secured a SPA with portfolio player Mitsubishi.

Some of last year’s deals involving Chinese niche buyers also bucked a trend that saw new contractual business shifting towards shorter duration and smaller quantities. While the durations of contracts were mostly between three and five years, some new deals were signed for 10 years and beyond. In addition, a handful of long-term deals were higher than the 1mn mt/yr or lower that had been the benchmark for some time.

LNG: from strength to strength

Novatek and Shenergy signed their SPA following record LNG shipments into China last year, as the world’s second-largest importer recovered its appetite post-lockdown to boost volumes in the second half of 2020.

Continued robust import growth suggests the prediction could be right. China’s combined imports of piped gas and LNG climbed by 17.4% on the year over January-February, up from growth of 2.8% a year earlier, according to state customs data. Separate volumes for LNG and pipeline gas will be released towards the end of March.

But Chinese pipeline gas imports shrank by 4.9% in 2020 to 34.5mn mt from 36.3mn mt the year before. Pipeline imports from Russia via Gazprom’s Power of Siberia pipeline ramped up in 2020, with a net gain of 4bn m³, but the increase was more than offset by a drop in flows from Turkmenistan and Uzbekistan.

PetroChina reduced central Asian pipeline imports amid weak demand in the second and third quarters of 2020. Market observers had expected piped central Asian gas transmission to pick up in the final three months to make up for the deferred volumes from previous months. The region’s flows, however, continued to suffer in the fourth quarter when compared with a year earlier owing to upstream disruptions and freezing weather that coincided with a severe cold snap in northeast Asia.

Pipeline imports from central Asia and Myanmar in the fourth quarter declined by 8% and 14% respectively year-on-year, with some of the gap filled by Russian pipeline gas, domestic production and LNG imports.

Despite last year’s contraction, China’s pipeline imports are poised to regain growth momentum in 2021 and increase their share of the domestic supply mix. More competitive pricing on oil linkages means stronger pipeline imports from central Asia and Russia should crowd out spot LNG imports, with Gazprom expected to supply an additional 5bn m³ through Power of Siberia this year.

PetroChina increased piped imports from Gazprom to 28.8mn m³/day starting from January 3, according to PipeChina – double the contract level of 14.4mn m³/d in 2020.

Imports from Turkmenistan fell by 14% in 2020. While central Asian gas would have been out of the money against bargain-priced spot LNG last summer, upstream issues were probably responsible for an unusually sharp 10.5% fall in gas from Turkmenistan volumes for the final three months.

In mid-January Turkmenistan commissioned a 30bn m³/y gas compressor station at the Malay gas field – an important source of supply for the Central Asia-China pipeline – which should pave the way for stronger imports this year. 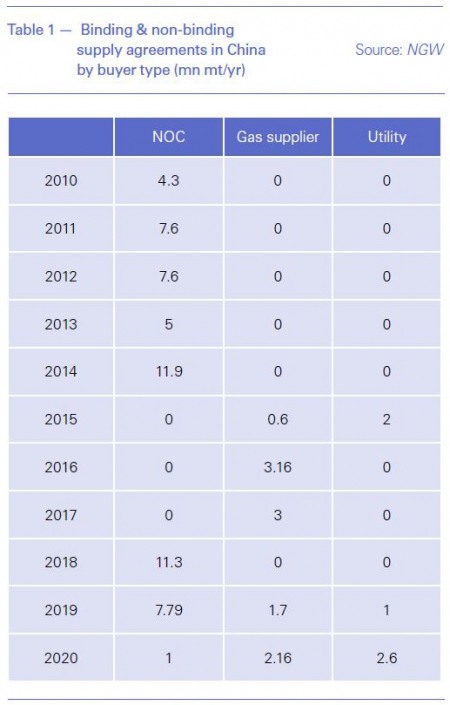 Higher LNG spot prices for delivery in northeast Asia (the Japan-Korea Marker, published by S&P Global Platts) compared with a year ago will also be supportive, as JKM prices above $6/mn Btu are unlikely to attract as much spot activity from independent Chinese buyers as last summer when the JKM averaged around $3/mn Btu.

Higher pipeline imports in 2021 will help to meet China’s growing gas demand. An analyst at the Chongqing Petroleum and Gas Exchange – one of two regional trading hubs in China – forecast to NGW that Chinese gas consumption will grow by 28bn m³ this year, or 8.8% from 2020.

Domestic production will maintain rapid growth of 15bn m³ – an increase of 8% from 2020 – on the back of continued policy support from Beijing’s concern over energy security. LNG imports meanwhile are projected to reach 71.5mn mt, implying a growth rate of 6.1% that represents a sharp slowdown from last year’s expansion rate. Piped shipments are anticipated to clock the biggest gain of 17% to top 40mn mt for the first time.

China’s LNG inflows in January may have reached a record 8.4mn mt as exceptionally cold weather drove up heating demand, according to data from Chinese commodities information provider SCI International.

Malaysian and Qatari arrivals came in stronger in January as China’s biggest supplier, Australia, delivered fewer cargoes. Australian flows to China dropped by 0.4mn mt or 14% in January from the previous month, mainly because Train 1 at Chevron’s Wheatstone LNG went offline. This resulted in imports dropping by 51% at southern China’s Dapeng LNG terminal, the main destination for Australian LNG into China.

Conversely, Malaysia and Qatar increased supply to China by 0.4mn mt and 0.3mn mt respectively in January, which is equivalent to 11 cargoes in total. More than one-third of the Malaysian volume was received at Shenergy’s Yangshan terminal offshore Shanghai, bringing up terminal use far above the planned level. Half of the increased supply from Qatar went to PetroChina’s terminal in Jiangsu province.

Qatar’s Train 4 came back online after unplanned maintenance in December, while Malaysia’s LNG complex in Bintulu may still be recovering from recent production problems at several trains. The Shell-operated Prelude floating LNG plant offshore Australia is also not expected back on stream until the summer.