Chinese carbon market gets off to lacklustre start [Gas in Transition]

Trading in China’s national carbon market – hailed as a major step in the global fight against climate change – has thinned in the two months since it launched in mid-July, adding to doubts that the emissions trading scheme (ETS) will help bend the country’s emissions curve any time soon.

Originally scheduled to open in this past spring, the launch date for China’s long-awaited ETS was first pushed back to the end of June and once more to July 16. The long-awaited launch – more than a decade after local officials first proposed the idea – marked an important milestone of a market-based tool to help China address its runaway carbon emissions.

The launch day got off to a brisk start with 10 companies – including subsidiaries of state-owned oil and gas groups CNPC and Sinopec – trading a combined 4.1mn metric tons of China Emission Allowances (CEAs) worth more than 10mn yuan ($1.55mn) in total. Sinopec was especially active in the initial days as it purchased 100,000 tons of CEAs from China Resources on July 21, in what was the first bulk trade in the market.

China has ranked as the world’s largest carbon polluter for the past 15 years and is currently responsible for around one-quarter of global greenhouse gas (GHG) emissions. Surging economic growth mostly fuelled by coal combustion since the early years of this century has quadrupled Chinese GHG emissions to 14.4bn mt of carbon dioxide (CO2) equivalent last year – more than the entire developed world combined.

The carbon-intensive economy means significant hopes have been placed on China’s carbon market. Despite only covering coal- and gas-fired power and heating stations to begin with this year, the ETS is already the world’s largest as it encompasses 4bn mt of CO2 emissions each year – equivalent to around 12% of the global total.

Financial institutions and individuals are excluded from China’s carbon trading for now but may be allowed in the future. Key emitters from non-power sectors, such as cement, nonferrous metals, petrochemical and steel industries, have already trading carbon emissions in seven regional trading pilot schemes since 2013. The government has said they will also be gradually added to the national trading market, but no specific timeline has been announced.

A decade in the making

The path towards China’s carbon market finally taking root has been long and winding. Despite considerable official willpower, the barriers – economic, financial, regulatory and political – have been high and forced a slow progress over the past decade. There has been corporate resistance to the idea with companies still bemused by the concept of carbon trading. 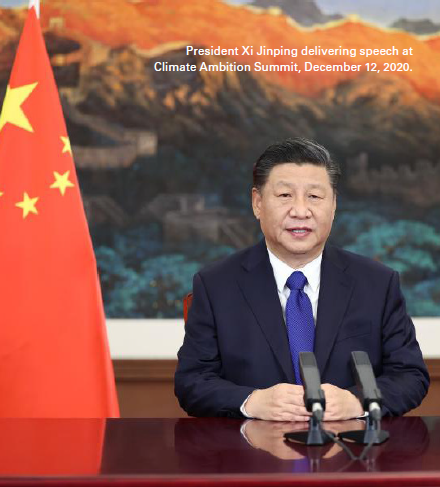 But China’s carbon market took on renewed urgency after the president Xi Jinping pledged last year to peak emissions by 2030 and eventually achieve carbon neutrality by 2060. The two new goals – referred to in Chinese policy discourse as the “30-60” goals – gave new significance to the ETS and helped speed up the start of its operational phase this year after a decade of preparation.

Beijing considers the ETS to be a central policy mechanism to help decarbonise its economy. As such, it represents a strategic shift away from coal that will start to impact the world’s biggest energy system. The effort to cap coal will boost gas consumption in the medium term as gas will be used as a bridge fuel in the process of transitioning from coal to renewables.

Coal accounted for 57% of China’s primary energy mix last year, down from 62% in 2016. The central government has set a target for coal to account for 56% of the energy mix this year. Coal still fuels half of China’s power supply but wind and solar are poised to capture a larger share of the market over the coming years.

A market in name only

China’s ETS is referred to as a carbon market but there are some key differences between the mechanism and those used in the EU and elsewhere. The Chinese scheme does not impose a hard cap on carbon emissions that falls over time – instead it gives each power station an annual allowance of CEAs every year that is calculated according to the facility’s expected output and carbon emissions per unit of output, known as carbon intensity.

If a power plant outperforms its allowance by producing less power or operating more efficiently, it generates credits that it can sell. If it exceeds its allowance, it must buy more allowances or pay a penalty. This dovetails with the EU’s cap-and-trade scheme, but the absence of a hard cap means the entire ETS structure can be adjusted each year to allow total national emissions to rise.

Another major shortcoming of China’s ETS is that the initial allowances granted to each power project are far too generous for the system to make a difference. In addition, the penalty for not complying with the ETS is far too low to incentivise change – the maximum fine is just 30,000 yuan.

Experts say that the design of the system indicates China is more focused on reducing carbon intensity than cutting absolute emissions. Until a hard cap is installed – which analysts expect to happen eventually – the scheme’s effectiveness in reducing overall emissions and encouraging the closure of coal-fired power capacity will be limited.

Capacity building and market rules remain a focus in the near term. Policies on emission compliance and trading details for 2021 are pending and are likely to be informed by policymaking dating back two years ago. In April 2019 China’s ministry of ecology and environment started to collect public opinions on interim regulations on carbon emissions trading management.

The regulations proposed to elevate the legislation level of emissions trading management rules from a ministry-level administrative measure to law, while lifting the penalty ceiling for non-compliance from 30,000 yuan to 10mn yuan, bringing compliance motivation to a whole new level and ensuring all companies buy into the idea of carbon pricing. More than two years after they were unveiled, the regulations have not been approved but the expectation is that a decision will be made no later than early 2022.

Since the first trading day in mid-July, volumes for CEAs have steadily declined. In the initial weeks of its launch, the allowances traded at around 55 yuan/mt, which was slightly above market expectations. Since then, however, volumes have thinned considerably – on September 14, just 3,950 mt was traded compared with the 4.1mn mt on the opening day. The closing price on September 14 stood at 44 yuan/mt versus 51 yuan/mt on July 16. 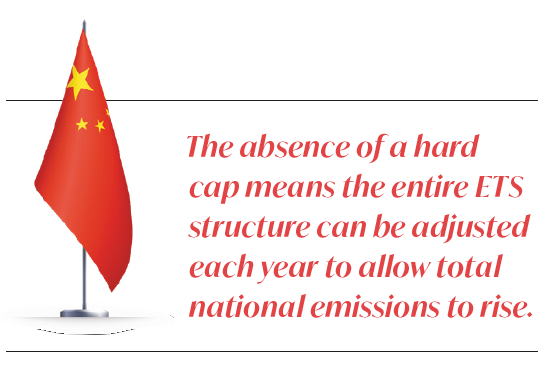 The plunging trade volumes have triggered concerns of liquidity. A key reason for the low volumes is that there have been some issues with opening trading accounts. On the first trading day, only 10 large utilities and energy groups participated in trading. This bottleneck has since eased as around 80% of the 2,162 enterprises regulated by the ETS had opened trading accounts, the market’s operator said in August.

The general sentiment is that the depressed trading volumes at present in China’s carbon market will persist for a while longer. The generous allocation for CEAs for each power station means only few have allowance shortages. The relative novelty of carbon trading in China also means that most enterprises are still designing their trading strategies and taking time to understand market movements.

The current low carbon price means the carbon market has made only a marginal impact on the generation economics of coal-fired power plants, with no immediate boost to China’s gas-fired power generation fleet. That said, the ETS and additional policies to discourage coal combustion have sent strong signals to local governments and companies to start reducing coal use as much as possible.

A case in point would be Xi’an, the capital city of Shaanxi province in north-central China. The province – a major coal-mining region that accounted for 17% of China’s total output last year – recently proposed to phase out all coal-fired power plants by 2025, the end of the 14th Five-Year Plan period. The power stations that could be shut down or moved are all combined heat and power facilities, and media reports indicated that their closure would boost gas demand in Xi’an by some 3.0bn m³/yr.

China has been pushing the residential and industrial sectors to switch from coal to gas since 2016. Power generation has been touted as the next sector in which gas can replace coal – power accounted for 16% of China’s gas demand last year – but coal’s continued dominance in electricity production means coal-to-gas switching is unlikely to occur on a large scale in the country.

Instead, more Chinese cities with more comprehensive gas infrastructure and higher affordability are likely to follow in the footsteps of Xi’an and undertake local campaigns replace coal with gas power in the next few years.