China overtook Japan as the largest LNG importer, despite Chinese gas demand growth decelerating. In November 2019, year-on-year demand increased by only 4%, compared with the 20% rise posted in the same month of 2018, according to data from the National Development and Reform Commission (NDRC). 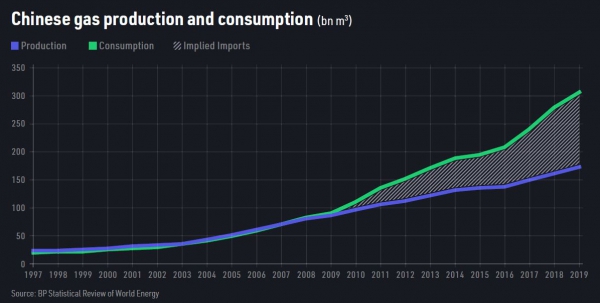 At the same time, domestic gas production jumped from 161bn m3 in 2018 to 173.62bn m3 in 2019, according to data from the National Bureau of Statistics. This was the biggest annual hike in a decade, albeit still below plan. 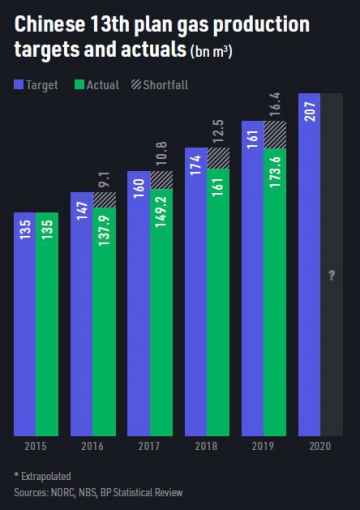 LNG fared relatively well as pipeline imports were little higher than in 2018. Under 48bn m3 was supplied from Turkmenistan, Uzbekistan and Kazakhstan through the Central Asia Gas Pipeline, while Myanmar supplied about 2bn m3, despite pipeline capacity of 12-13bn m3.

That left LNG to pick up the slack, with imports rising 12% year on year to more than 60mn mt in 2019. Almost a quarter of this was imported in November and December -- 6.5mn mt and 7.2mn mt, respectively -- resulting in China overtaking Japan as the world’s most avid consumer of LNG during the two months.

Until recently it was expected that 2020 would see gas and LNG demand grow at levels that, while modest by past standards, were still substantial. In January, the research institute of the state energy company CNPC projected that gas demand would rise by 8.6% to 330bn m3 in 2020, production would rise by 8.2% to 187.5bn m3, and imports would rise 9.3% to 150bn m3, including a 9.5% hike in LNG imports to 94bn m3.

The signing on January 15 of the first phase of a deal to end the trade war with the US appeared to bode well for these projections being met, if not surpassed, since the dispute has dragged down Chinese economic growth and energy demand. However, following the coronavirus, or Covid-19, outbreak all bets are off.

The duration and extent of the outbreak remains uncertain at the time of writing, but it is inevitable that the Chinese economy will grow more slowly in 2020 than previously expected. On February 7, the deputy governor of the People’s Bank of China (PBOC), Pan Gongsheng, said the economy would be disrupted in the first quarter, adding that the bank would release reserves to help maintain liquidity and lower interest rates.

Most international analysts are more pessimistic about the duration and extent of the impact than state bodies such as PBOC. Goldman Sachs has cut its 2020 GDP growth forecast from 5.9% to 5.5%, with the caveat that it could fall further, to below 5%, in the event of a prolonged outbreak. Meanwhile, credit rating agency S&P has cut its GDP forecast from 5.7% to 5%. 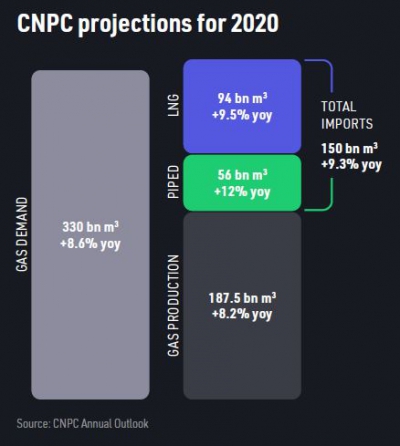 With growth likely to be affected across all sectors of the economy, it is expected that gas use will be hit in all markets except, possibly, the residential sector. Gas demand in the commercial sector has already been hit by quarantine and other precautionary measures.

However, the main impact is likely to be felt in the power generation, industrial and transportation sectors as the constrained movement of goods and people hits supply chains and manufacturing operations, with the impact worsening the longer the outbreak goes on.

Several analysts have sought to quantify the impact on LNG demand. Norway’s Rystad Energy has revised its estimate of Chinese 2020 LNG demand growth from 10-13% to 4.7%. Xi Nan, Rystad’s Vice President for Gas and Power Markets, noted that “the growth rate is expected to be much lower than previously predicted, mainly due to the industrial sector. The largest gas consumer in China is undergoing a heavy hit.”

Woodmac is more downbeat, projecting that its previous 2020 gas demand forecast of 330bn m3 will fall by 6-14bn m3. Gas demand will thus grow by 4-6%, compared with its previous expectation of 8%. After taking into account the 1.6-2.9bn m3 pared from its estimate of 2020 Chinese gas output, the consultancy expects LNG could take a hit of 2.6-6.3mn mt.

Serious though it will be in the near term, the impact of Covid-19 on gas and LNG demand is likely to be more limited in the longer term than structural shifts in the Chinese economy and changing government policies.

Concerns over the Chinese economy have been growing for some time. Even before Covid-19, the World Bank forecast that GDP would grow at a less than stellar 5.9% in 2020. This is below the 6.1% provisionally estimated for 2019 -- itself the lowest increase since 1990.

While the economic malaise can be in part attributed to the US trade war, it also reflects more deep-seated issues. For instance, US tariff hikes have given some manufacturers an impetus to move their operations overseas, but the exodus from China had already begun for cost, resource and logistical reasons within what is an increasingly integrated Asian economy.

In terms of policy, one key area where the government appears to have shifted its enthusiasm is in the switch from coal to gas-firing in the heat and power sector. Driven by concerns over pollution, this policy has accounted for a significant part of increased gas use in recent years.

However, doubts have grown over China’s reliance on unevenly distributed and imported gas supplies, given the low cost and widespread availability of indigenous coal and, increasingly, renewable energy. These concerns gained considerable traction when the over-enthusiastic pursuit of the coal-to-gas conversion policy caused gas shortages and a massive spike in LNG prices in winter 2017-18.

The impact of the economic slowdown and policy changes has been exacerbated in recent months by unusually mild winter weather across China. While LNG imports in late 2019 may have reached record levels, this reflected stock building and the need to meet contractual commitments rather than increasing demand.

By the start of 2020, burgeoning stocks had led Chinese importers to stop buying spot LNG and attempt to resell contracted cargoes. On February 5, China’s largest importer Cnooc declared force majeure on February and March purchases from at least three suppliers, ostensibly because of problems resulting from the Covid-19 outbreak. In similar vein, Rystad Energy noted that PetroChina had delayed discharging cargoes “due to uncertain downstream demand and a shortage of workers because of the epidemic.”

All in all, it appears to be a perfect storm. Mild winter weather and disruption caused by the Covid-19 outbreak have occurred against a backdrop of profound economic restructuring that is seeing a haemorrhage of energy-intensive industrial activity, and seemingly lukewarm government support for gas use.

Nor has the bad news finished. Pipeline imports are set to reach at least 55bn m3 in 2020 following the official inauguration in December of the Power of Siberia-1 pipeline from Russia. At full operation, scheduled from 2025, Gazprom will sell 38bn m3/yr of Eastern Siberian gas to CNPC under a 30-year contract. CNPC has said it will import 5bn m3 in 2020.

This combination of circumstances in China has been exacerbated by weak seasonal gas demand elsewhere in the northern hemisphere and the worsening overhang of supply in the global LNG market. The upshot has been a collapse in the international LNG spot price to under $3/MMBtu in February.

Pessimism regarding the state of the Chinese LNG market can be overdone. It is easy to forget that it is demand growth, not demand, that is falling, and that the demand base is now much higher for both gas and LNG. While import growth of 5%/yr may appear puny compared with recent levels, it would still represent a significant amount of additional LNG.

Nor is the current combination of circumstances likely to last long. The containment of Covid-19 may take time, but once achieved, past precedent suggests there is likely to be a strong rebound in Chinese economic activity and thus gas demand.

Moreover, the apparent lack of official enthusiasm for coal-to-gas conversion is not shared by large swathes of China’s increasingly assertive population.

Restructuring towards a more service-based economy will offer not only threats but opportunities, not least of them the shift towards greater diurnal and seasonal variation in gas consumption, which will play to LNG’s supply strengths.

China’s LNG market undoubtedly faces severe problems at present, with its buyers seeking to avoid receiving additional supplies at any price. But only two years back the same buyers were scouring the international market for supplies regardless of price. Whether the market will offer feast or famine two years hence is far from certain.