China’s voracious pursuit of gas is not the only cause of soaring LNG demand and prices in 2021. Nor is it unprecedented. But it does raise an important question – does China’s surging demand for gas and LNG reflect a simple bounce back from the COVID-19 pandemic, or a permanent upward shift in the trajectory of its gas and LNG requirements? 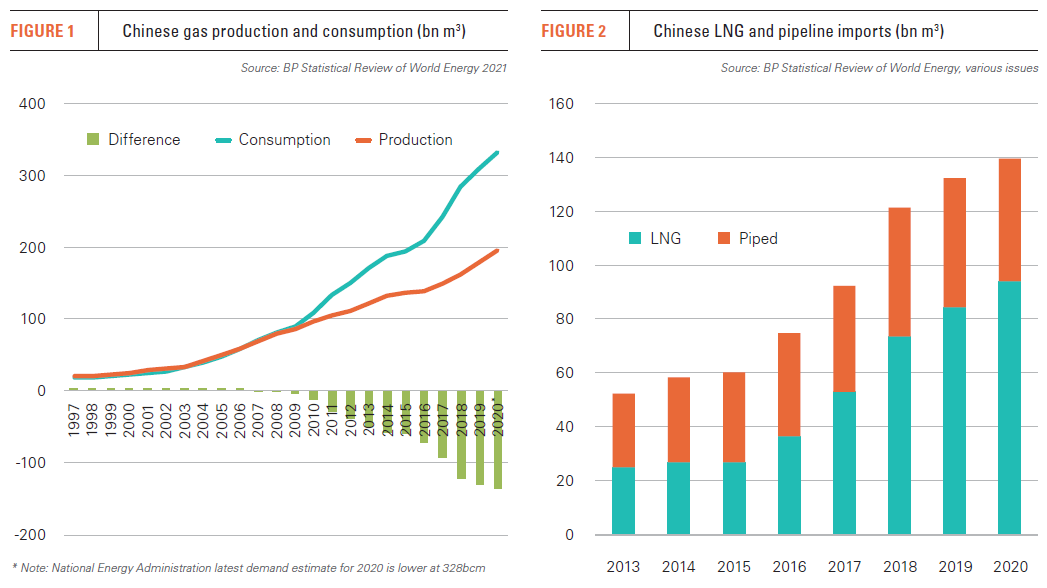 Chinese gas demand in 2020 has been variously estimated at between 326bn m3 and 331bn m3 (Figures 1 & 2), the relatively modest increase from 2019 reflecting the pandemic’s impact on economic activity. A bounce back in 2021 was always expected, but its extent has surprised many analysts.

Consultancy Wood Mackenzie projected in October that gas consumption would increase by 42bn m3 in 2021, while, at company level, state oil concern CNOOC has seen its sales rise 30% year on year from January to September.

Much of the additional gas will be imported. According to the National Bureau of Statistics (NBS), China produced 151.8bn m3 of gas in the first nine months of 2021. This was 14.7bn m3 more than in the same period of 2020, implying full-year output will be about 20bn m3 up on 2020. This would be about half the projected growth in demand, suggesting gas imports will reach at least 160bn m3.

One of the strongest growth sectors for gas in 2021 has been from surging demand for power. According to the NEA, electricity demand grew by 16.1% in the first half of the year, with the increase being driven by resurgent industrial and service sector activity.

Rising demand for electricity occurred at the same time that key sources of generation were beset by problems (Figure 4). The impact of low rainfall on reservoir levels affected hydroelectric output, especially in southwest China. Hydro output of 902.99 TWh in the nine-month period to September 2021 was little higher than in the same period of 2020. Generation from nuclear, wind and solar facilities did increase strongly during the first nine months of 2021, but from relatively low bases.

The burden of meeting the high growth in power demand would usually fall on coal-fired generators, the electricity sector’s largest supplier by far and its traditional backstop (Figure 3). But the coal industry was hit hard in 2020 both by the pandemic and more stringent environmental policies. 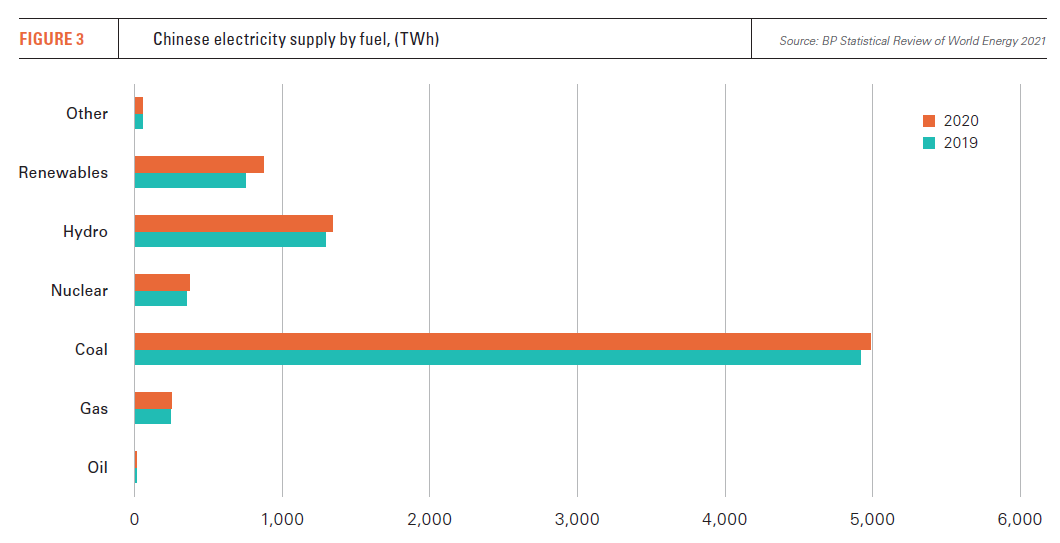 Coal output of 2.78bn metric tons in the first nine months of 2020 was little higher than the 2.73bn mt recorded in the same period of 2019. The rapid growth in electricity demand in 2021 thus found the coal industry unable to respond quickly, with many mines having cut back production or closed.

Coal output during the nine-month period to September 2021 did increase, according to NBS data, but only by 5% year on year to 2.93bn mt. In addition, logistical issues affected the supply of coal-fired electricity in some coastal provinces and areas affected by low hydropower output.

Even where coal was available, its spiralling price put off generators unable to pass on the higher cost to consumers.

Gas-fired generation of 236 TWh in 2019 accounted for only 3.2% of China’s total electricity output, and was concentrated in a relatively small number of areas, including Guangdong, Jiangsu, Zhejiang, Beijing and Shanghai. Output in 2020 was little higher, with BP data putting it at 247 TWh.

However, the coal sector’s difficulties in 2021 resulted in a greater call than usual on gas-fired plants, which have seen generation increase sharply. For instance, Wood Mackenzie estimates gas-fired generation rose 14% year on year in the first four months of 2021. This has since grown. According to Chongqing Gas Exchange data, the year-on-year increase in September was over 20%.

Higher gas-fired generation and the depletion of coal stocks helped thermal generation grow at double-digit levels in the first nine months of 2021. Even so, a significant amount of electricity demand has gone unmet since August, and there are fears that the early onset of cold weather in what is anticipated to be a severe winter could lead to the power shortages worsening.

Beijing has ordered about 20 provinces to impose curbs on electricity use, including in energy-intensive industries such as steel, aluminium and cement.

The restrictions on electricity use have unsurprisingly had an adverse economic impact. It is estimated that Chinese GDP grew by only 4.9% year on year in third-quarter 2021, with many analysts having downgraded their forecasts for 2021 and 2022.

Against this background, higher than usual gas-fired generation is expected to continue into 2022 and possibly beyond. But it is unlikely to continue in the medium term, unless the cost disadvantage of gas against coal is offset by carbon pricing or other measures.

In the longer term, it is officially planned that renewable capacity will displace much gas-fired generation, but there will still be growth. 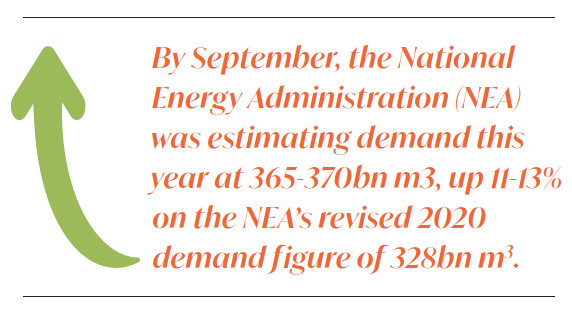 Huang Miaoru, Wood Mackenzie’s Research Director for APAC Gas and LNG, forecast in October that installed gas-fired capacity would increase four-fold to 392 GW by 2050. However, she added that gas-fired generation was expected to grow at a much lower rate. Under the integrated renewables-and-storage based electricity system planned in China, gas plant utilisation rates are expected to fall as the plants move to peak-shaving operations or act as reserve.

Gas use grew strongly in the industrial sector in 2021, with much of the consumption occurring in coastal provinces distant from the main centres of coal production and with easy access to LNG terminals. Many of the gas users are newer, small-to-medium size enterprises involved in manufacturing rather than traditional heavy industries.

However, much of the growth represented a return to pre-pandemic levels of activity by existing users. In the longer term, the industrial sector’s share of overall gas consumption is expected to continue declining, in line with the fall from over 50% of the total in 2000 to 42% in 2020. Wood Mackenzie’s Huang has projected that the percentage could fall to 34% in 2050.

Instead, the expectation is that most of the growth in gas use will, as in recent years, occur in the commercial and heating markets. 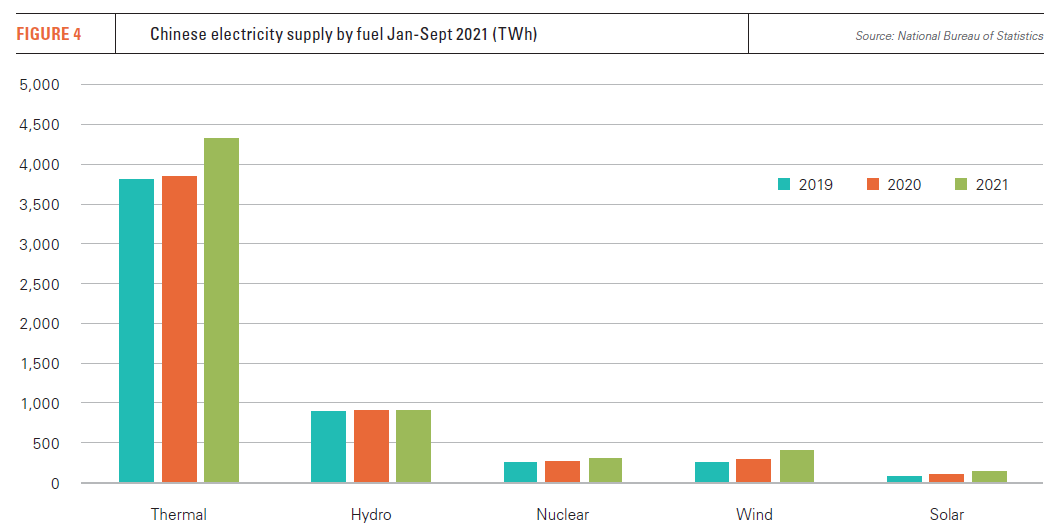 While the share of gas taken by city distribution systems has grown steadily for some years, the trend was given a major boost in 2017 when Beijing pushed the large-scale conversion of coal-fired heating systems. In the initial phase at least 10bn m3/yr of additional gas demand was created by converting more than 4mn coal-fired systems in 28 northern cities.

Gas demand from the heating sector soared in early 2021 because of the additional heating systems, compounded by cold weather. CNOOC alone supplied the sector with 24bn m3 in the 2020-21 heating season – up almost 25% year on year.The initial phase hit supply problems, with fewer conversions occurring in 2018 and 2019. But the government said in September 2020 that more than 7mn households were targeted to switch from coal to gas or electric heating ahead of the 2020-21 winter heating season, following substantial investment in gas distribution networks.

With the 2021-22 heating season expected to be equally challenging, the national oil companies are gearing up to supply at least 10% more gas than last year. PetroChina has said it will supply more than 106bn m3 during the winter to all consumers, with CNOOC and Sinopec each supplying about 27bn m3.

The companies have also accelerated work on additional LNG import facilities and gas storage capacity with, for instance, Sinopec having commissioned the 10bn-m3 Zhongyuan storage facility.

The increasing proportion of gas used in the commercial and residential sectors rather than industry is having consequences. The demand curve has become less flat and less predictable, with greater seasonal variations in use and demand more dependent on weather. Gas flows have also been affected, with some deliveries into southern China not being used locally but piped to urban areas in the north to help meet seasonal heating demand.

To some extent the greater variation in demand will favour more flexible LNG supplies over pipeline imports, which encompass large volumes of gas typically delivered on more rigid terms.

That is not to say that LNG will only be sought on a spot basis; the large additional base volumes of gas needed by China are likely to encourage more long-term contracts along the lines of those recently agreed with the US or Qatar.

The pandemic bounce back is clearly part of the story, especially for industrial gas use, but structural changes are also occurring.

There will be a greater use of gas for power generation in the near term, but less certainty regarding the scale of long-term growth. Gas use in the commercial and heating sectors will certainly grow, but by how much will depend on policy and technological advances. What looks certain, however, is an increase in weather-related demand volatility, which will feed directly through into the LNG market.