After three years of relatively slow growth, Chinese gas demand grew by 15.3% in 2017 and 18.1% in 2018, reaching 280.3bn m3 last year, according to National Development and Reform Commission data. By contrast, gas production grew only 8.5% in 2017 and 7.5% in 2018 to 161bm m3, according to the National Bureau of Statistics. That was well below plan, with production of non-conventional and especially shale gas proving problematic. 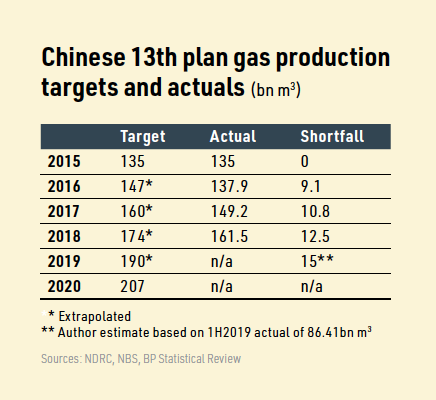 The imports will include a substantial amount of piped gas. Myanmar supplies 3-4bn m3 annually, but most current piped imports come from Turkmenistan, Uzbekistan and Kazakhstan. Together, they supplied 46.9bn m3 in 2018 through the three-pipe Central Asian system, according to China’s CNPC International Pipeline Co.

Central Asian pipeline capacity is expected to increase from 55bn m3 to 60bn m3 in the near future as new compressors are installed. However, actual imports in 2018 were some 4.5bn m3 lower than the planned level of 51.3bn m3 because of glitches in Turkmen supplies. Following a similar shortfall in 2017 this appears to have exacerbated Chinese concerns about over-reliance on Central Asian imports. Initial operation of a fourth pipeline -- the 30bn m3/yr ‘D’ project – has already slipped from 2016 to 2022 at the earliest.

Piped imports will nevertheless grow substantially in the near future. The 38bn m3/yr Power of Siberia-1 pipeline from Russia is scheduled to enter operation by year end and ramp up to full capacity in the mid-2020s. But plans for a second, 30bn m3/year line from Siberia remain at an early stage, while a third mooted Russian project is even further off.

Piped imports could thus range from 98bn m3 to 158bn m3 in the second half of the 2020s. The lower end of the range may on balance be more likely. While pipeline gas may be cheaper than LNG in much of China, there appears to be decreasing government and industry enthusiasm for capital-intensive projects that take years to implement and lock the country into long-term contracts with a small number of suppliers – other than using them as leverage to seek better terms from LNG producers.

It is thus likely that a large amount of additional LNG will be needed. The IEA projected in June that Chinese LNG imports in 2024 would reach 109bn m3 (80.1mn mt).

Meeting this figure will require more regasification plant. The capacity of the country’s 20 LNG terminals is currently about 84bn m3. Securing the capacity should not prove difficult, since expansion projects at existing plants could provide 54bn m3, while about 30 new terminals are planned. The country’s existing terminals also often work above nameplate capacity in part because of LNG trucking operations where imported LNG is not regasified at the terminal but taken by truck in land. In January, the government indicated nameplate capacity could reach 336bn m3 by 2035. 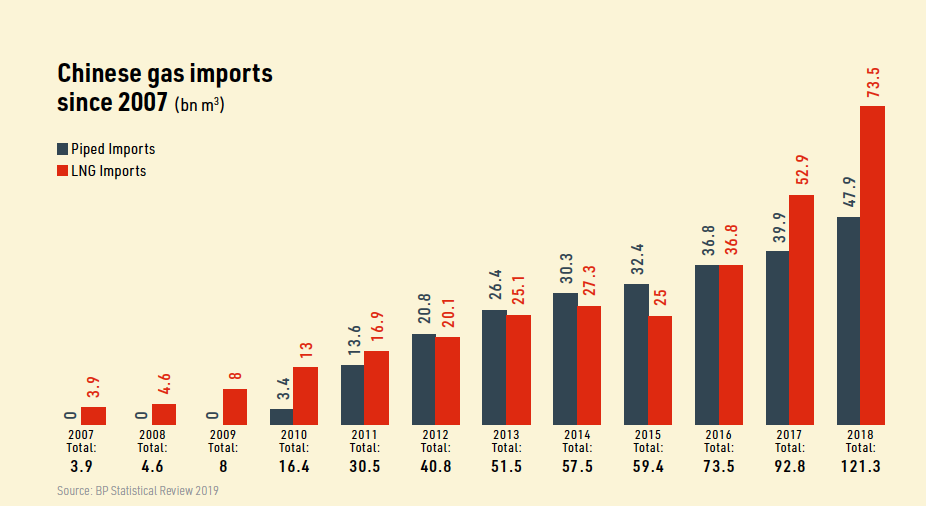 While LNG imports are projected to rise, probably steeply, there is no reason why this should result in a spike in international spot LNG prices similar to that experienced in winter 2017-18. Lessons from that episode have been learned, and many of the measures needed to avoid a repetition have already been put in place.

The winter 2017-18 spike may have resulted from a global supply-demand imbalance, but the underlying cause was bad planning in China, combined with bad timing. In 2017, the Chinese authorities switched a large number of industrial and commercial enterprises from coal to gas for environmental reasons. At the same time 28 northern Chinese cities switched four million residential consumers – a third more than originally planned. Gas demand surged.

The swathe of coal-to-gas conversions coincided with a colder than usual winter in China and elsewhere in Asia. It also coincided with inadequate infrastructure to distribute gas to many of the new consumers, and insufficient forward purchases of gas by China’s main LNG procurers. The outcome was worsening gas shortages, unheated schools and homes, and China’s state energy companies scouring the international market for LNG at any price.

The crisis resulted in a number of initiatives, the most eye-catching being the large-scale, long-distance trucking of LNG from southern terminals to northern consumers. But most of the initiatives have involved kick-starting longstanding proposals to reform China’s gas system.

The success of the measures can be gauged by the unexceptional conditions in winter 2018/19. Admittedly warmer than the preceding winter, and with China’s state energy companies having been on an LNG buying spree in preceding months, there were no significant gas shortages or price turbulence.

LNG trucking continued, but reverted to its primary role of supplying industrials and city gas grids unconnected to the main pipeline system. Trucking LNG to small and medium-sized customers located relatively close to import terminals, where the alternative is building spur pipelines, is both economically viable and increasingly common. In 2018, consultancy Wood Mackenzie noted that trucking accounted for 12% of Chinese LNG movements in 2017 and projected a doubling to 38mn mt by 2025. 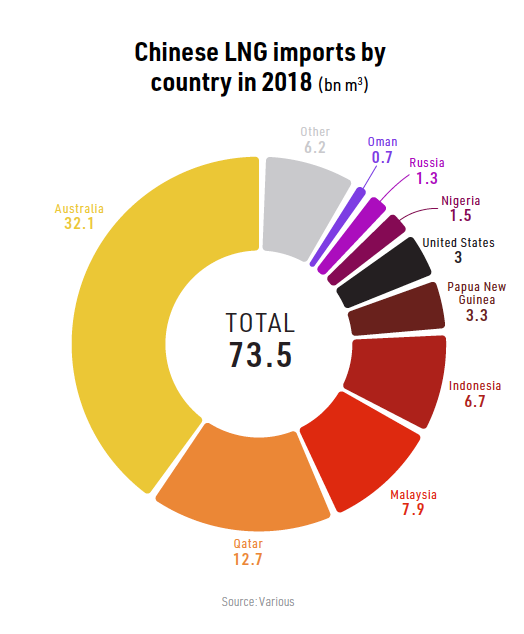 Among the reforms given impetus by the 2017-18 price spike was the partial liberalisation of city gas sales to residential users. These customers previously paid state-set prices that had increasingly fallen below cost as the share of more expensive imports in overall gas supply rose. Under the new structure residential sales are moving to the city gate prices benchmarked to fuel oil and LPG which have been paid for years by industrial and commercial customers.

Beijing’s eventual aim is for wholesale prices to directly reflect international prices rather than those of alternative fuels, making consumers more responsive to price signals. To this end, gas trading hubs have been established at Shanghai and Chongqing.

The emphasis of the coal-to-gas conversion programme has been revised to ensure the guiding principle is a coordinated approach rather than the highest number of conversions. In particular, switches can now only be implemented if backed by guaranteed gas availability and infrastructure.

To ensure sufficient gas is available the government wants more new LNG import terminals to be located close to demand centres. It also wants part of the new capacity to be owned by companies other than the three main state energy companies, CNOOC, CNPC and Sinopec, to inject competition into the market.

There have also been moves to optimise the use of the three incumbents’ existing facilities. Third-party access to their terminals was mandated in mid-2018, although industry sources say it is still tightly controlled by the main state companies.

Gas transmission and distribution infrastructure is being promoted in tandem with the expansion of LNG import capacity and consumer numbers. A national pipeline company which will allow third party access to the 76,000 km of trunk lines is at an advanced stage of planning.

The expansion of underground gas storage is also being promoted. This is not least because residential demand is characterised by more peaky seasonal and diurnal patterns than industrial gas use. Storage capacity currently stands at only 3% of annual consumption, but by 2020 the three state energy companies are required to have storage equivalent to at least 10% of their contracted sales, while city gas companies should have 5%.

There is no question the 2017-18 gas shortages, price spike and associated bad publicity have galvanised the Chinese authorities into promoting policies that had seen only glacial movement for years. At the same time, China is invariably cautious in implementing new measures, especially ones which involve ceding state control, meaning the creation of a liberalised gas market could be years away.

There is little doubt that until then China will cause future global gas supply glitches and price spikes. But there is also little doubt that China is already better placed to cope with them – not least through the availability of a large fleet of LNG trucks able to remedy any distribution problems.