But as the country approaches the midpoint of its heating season, uncertainties remain and cold weather could easily disturb the fine balance in the market.

Gas supply has proved resilient in China’s heating season so far with no reports of shortages in Chinese media or on social networks. The four-month heating season runs from November to March, and that is when cities in northern China use district heating systems that in recent years have been increasingly fuelled by gas and electricity instead of coal.

China’s gas market entered the heating season with some unease after the National Development and Reform Commission (NDRC) – which steers Chinese energy policy – warned in October that some northern regions faced potential shortages owing to the possibility of cold snaps caused by the La Nina weather pattern.

The heating season traditionally begins in most cities in mid-November, but the early onset of low temperatures this year prompted numerous municipalities to switch on district heating from the start of the month. This pushed up heating demand faster than usual this winter – China saw a 14.6% year-on-year increase in its daily average gas consumption in the first 11 days of November, while demand for coal was also robust, according to the NDRC.

From famine to feast

Supply risks surfaced after the 3mn metric tons/year Beihai LNG terminal went offline following a fire and pipeline gas imports from Turkmenistan dipped briefly. But overall, no major issues arose and fears of a supply crunch dissipated as the heating season got underway.

Entering December, the market narrative switched from shortfall to surplus. The chief concern among some Chinese gas market players was that the market would be oversupplied – particularly if central Asian countries did not experience an especially cold season. In the past, cold weather coinciding in China and central Asia has tested the ability of those exporters – particularly Turkmenistan – to maintain steady exports to China.

The market concerns rippled out to some LNG suppliers, as a supply glut in China would likely spill out into global LNG markets, causing oversupply and lower prices. In recent weeks, however, robust demand from the onset of freezing weather in northern China and the eastern seaboard has kept the market in balance.

Two months into the heating season, China has managed to sidestep gas shortages while meeting strong demand for the fuel. Apparent demand in October jumped by 11.4% year-on-year to 26.78bn m³, raising the total for the first 10 months of 2020 by 5% from last year to 257.73bn m³, according to the NDRC.

Demand growth is expected to remain strong for the rest of the heating season due to improving macroeconomics, heating demand from newly connected gas users, and a low base in the first quarter of 2020.

Gas analysts with the research unit of state-owned China National Petroleum Corp (CNPC) expect monthly demand to reach 32.1bn m³ in December as well as November, which would bring total consumption for 2020 to 321.93bn m³ – slightly above the official forecast of 320bn m³ and up from 306.7 bn m³ in 2019.

The strong growth momentum during China’s peak gas demand season underlines the extensive preparations Beijing undertook to ensure supplies for this winter. The biggest difference this time round has been the presence of state-controlled midstream oil and gas company PipeChina, which officially started operating at the beginning of October.

With the majority of China’s midstream gas assets now consolidated into PipeChina, the company moved to accelerate gas infrastructure commissioning and improving connectivity in time for the heating season. It successfully connected the West-East gas pipeline network with the Qidong LNG terminal in Jiangsu province operated by independent Guanghui Energy and started to ship gas from Towngas’s Jintan underground storage depot in Jiangsu.

This followed the October 30 commissioning of the 20mn m³/day Fuzhou connector to the West-East pipeline, which will allow LNG imports from terminals in the south to be transported to the north.

And Sinopec’s Shandong pipelines were successfully connected to the PipeChina-owned Qing-Ning pipeline on October 20, which will help move LNG from the east to the north. The improved interconnectivity means higher volumes have been able to reach northern demand centres from China’s south and east this winter.

PipeChina has also been in a hurry to open up third-party access to 10 out of the 22 LNG terminals in China that it controls: six are operational and four under development. It kicked off the process in October by inviting companies to apply for licences to use its gas facilities, and then in December released details of available spare capacity at its six operational terminals for 2021. 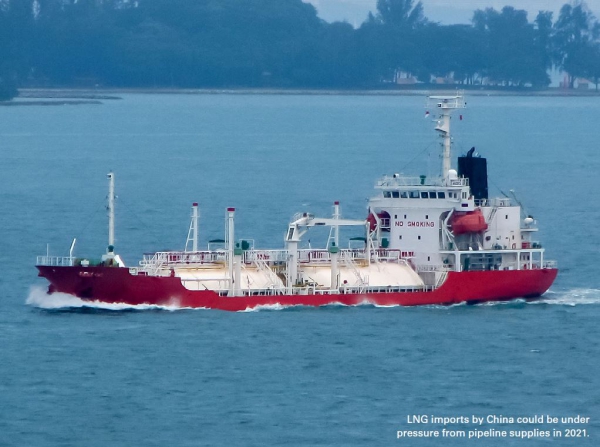 Last winter, CNPC planned storage withdrawals of 10bn m³, but only extracted 7bn m³ as the pandemic cut demand. CNPC expects to withdraw 12.4bn m³ this winter, which would be up by 5.4bn m³ or almost 80% year-on-year. The increased inventories have helped manage winter peaks so far this heating season.

Stockpiles aside, China’s suppliers also appear to have covered for a normal or colder-than-normal winter when securing volumes earlier in the year. Domestic production levels have gradually climbed since September with the full recovery of domestic demand as well as more available storage capacity. Gas output reached 16.9bn m³ in November, equivalent to a record 560mn m³/d, according to official statistics. November output grew by 3.7% from October, the third consecutive month-on-month rise and 11.8% higher than a year ago.

China’s December gas production is expected to rise further as CNPC announced mid-month that its Southwest Oil and Gasfield subsidiary had produced more than 30bn m³ in 2020 as of December 14, up by nearly 5bn m³ from the same time in 2019. Over January-November, China produced 170.2bn m³ of gas, up by 9.3% from a year ago and slightly higher than the 9.2% growth reported during the same period of 2019.

At its current pace, China is on track to produce a record volume of domestic gas in 2020. Chinese production reached 173.6bn m³ in 2019, an increase of 9.8% or 13bn m³ from the previous year. Production growth is expected to remain around 8% year-on-year throughout the remainder of the heating season.

CNPC, Sinopec and Cnooc – China’s biggest LNG importer – took advantage of JKM prices in the first several months of 2020 to import bargain-priced spot cargoes that mainly went into storage. While LNG imports are forecast to hit a record in December, pipeline imports are expected to ramp up significantly too as CNPC will need to meet contractual obligations on piped gas deliveries – adding to the abundant supply.

Pipeline imports have reached 35bn m³ so far this year, down by 7.2% from a year ago, so CNPC – China’s sole importer of piped gas – will need to increase flows substantially in the final months to meet its obligations. The NOC’s gas analysts expect pipeline imports to reach 14.5bn m³ in Q4 2020: 12.3bn m³ from central Asian exporters and the remainder from Russia and Myanmar. All pipeline gas prices as well as Russian LNG are likely to be linked to crude oil.

From January 2021, Chinese imports via the Power of Siberia pipeline will double from their current level to 28mn m³/d. Russia’s Gazprom is anticipated to contribute an incremental 1.8bn m³ during Q1 2021 – an increase that will be supported when the China-Russia East gas pipeline starts: the 1,100-km section will allow Siberian gas to reach gas consumption centres including Beijing.

While gas shortages are not on the horizon, demand is expected to remain firm through the heating season as Beijing continues to replace coal with gas. Authorities have pledged to switch 7.09mn households in 45 cities in northern China from coal to gas or electricity this winter.

Temperatures over the remainder of the winter will be a key determinant of gas demand for the heating season. While China’s regulators and major gas suppliers have prepared for a cold winter, the period from late December to early January – when consumption peaks at more than 1bn m³/d – will pose the toughest challenge. Supply disruptions at the time coupled with a cold snap across the country could disturb the fine balance in the market and lead to some temporary constraints.

China’s meteorological administration has forecast a relatively drier climate from January to May, which could curtail hydropower availability and push utilities to rely more on thermal power – including gas – instead. The administration has also predicted heavy snowfall in north China for most of January, which will drive up demand for gas heating.