China is alarmed by the potential consequences of its trade war with the US – and the increasing readiness of the US to use sanctions as an economic tool – on its energy supplies. This is a particularly sensitive issue where these rely on imports from countries that may be subject to influence by the US.

With Saudi Arabia accounting for more than 15% of China’s crude oil imports, the recent instabilities in the Persian Gulf have helped push security of supply to the top of China’s political agenda.

As part of this drive, the government decided to open oil and gas exploration and production fully to foreign and private companies. On January 9, China’s ministry of natural resources issued a pilot guideline, taking effect May 1, inviting qualified companies to apply. This comes on top of measures announced last July to lift restrictions, widen market access and open up foreign investment in the oil, gas, mining and other sectors of the economy.

One reason for the timing of the latest announcement is to overcome concerns about access to the oil and gas industry by foreign companies, before it signs the phase-1 trade deal with the US.

China Daily, the government’s mouthpiece, states that the guideline includes domestic companies and foreign companies registered in China with net assets more than yuan 300mn ($43mn). The companies must also be able to meet certain safety, environmental protection and technology criteria. They will then be eligible to apply for oil and gas prospecting and mining permits. These will be initially valid for five years, but can potentially be extended for another five.

Firms seeking extensions will have to relinquish 25% of their exploration areas from the levels originally approved. The government says that this will force state firms, which control most of the prospective oil and gas deposits, to cede acreage.

The new guideline also promotes competitive transfers of prospecting and mining rights through public bidding, auctions and listings, except in special circumstances that allow such rights to be transferred.

After oil or gas is found, the holder of the prospecting rights must register the resources with the authorities and then production may begin.

Referring to the changes, vice minister of natural resources Yao Huajun said they will introduce “diverse players into the market to boost market vitality and expand the sources of funding for exploration,” adding that they will also enhance the country’s exploration capacity to ensure its energy security.

What the government hopes is that the new measures will bring more players into the sector to stimulate vitality and competition and increase production.

What is the current situation

Today, foreign company participation is only possible through joint ventures or in partnership with mainly state-owned Chinese companies and their listed vehicles. Only state-owned firms – such as PetroChina, Sinopec and Cnooc – are eligible for permits. The new guideline abandons this restriction.

This will be the first time that foreign oil and gas companies can apply to operate in China without the need of a local partner.

As part of efforts to overhaul its energy sector, but also to ease commercial frictions with the US, China also took steps last July to remove restrictions on foreign investment in oil and gas and ban forced technology transfers, among others.

And it has not been plain sailing for the international oil companies (IOCs) either. Difficult shale geology was reportedly the reason why BP pulled out of its production-sharing contracts with CNPC last year. Other majors, such as Eni, ExxonMobil and ConocoPhillips have also stopped drilling for shale gas in China, finding more and easier-to-produce reserves elsewhere.

But China’s government is determined to succeed and in 2019 it extended unconventional gas production subsidies by three years. This is already having a revitalising effect, with state oil and gas companies – PetroChina, Sinopec and their listed vehicles – spending more as they drill more.

Two PetroChina tested oil wells at a shale field in western China in March last year showed promising results and could finally mean a strong commercial potential for shale oil for the first time in China.

And Anglo-Dutch major Shell signed an agreement with Sinopec in 2019 to jointly study the potential development of shale oil in eastern China. It also has exploration agreements for shale gas and coal-bed methane with PetroChina.

The freedom from restrictions on where to invest and the new independence may lure IOCs back into China’s upstream oil and gas sector.

Purpose and benefits of new measures

With most of its oil and gas exploitable resources already developed and depleting, finding and developing new resources is becoming riskier and requires substantial, long-term investment and new technologies, particularly in the unconventional oil and gas sector.

The new measures reflect China's push to bring diverse investors and other players into the oil and gas industry as part of a market-oriented reform of the sector. It is also hoped that they will bring much-needed private capital into the country’s upstream oil and gas business.

Lin Boqiang, head of the China Institute for Studies in Energy Policy at Xiamen University, said: "In the long term, with more market players and with fair competition, the cost of oil and gas exploration and mining will be reduced and efficiency will be raised. It will become economical and feasible, then, to find and extract resources that are too expensive to make use of right now. And it will increase oil and gas supply." 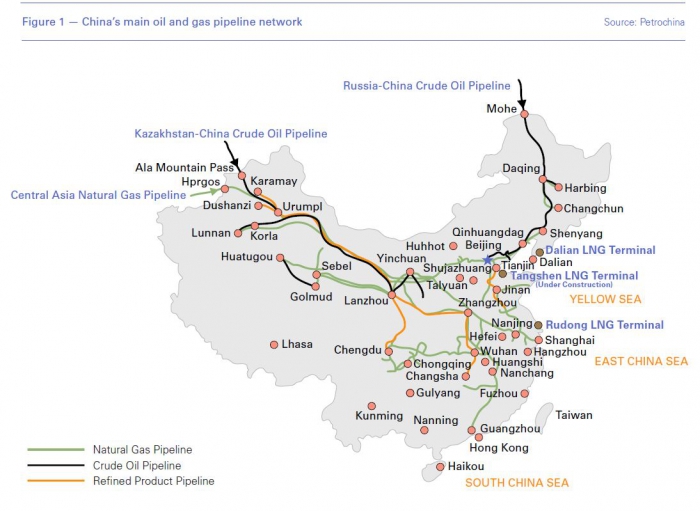 Zhang Xinsheng, executive chairman of Shell Companies in China, said these changes will bring more business opportunities and investment options in related industries with broadened market access. He added that Shell values the co-operative relationship with its Chinese partners and will continue to bring its cutting-edge technologies and professional capabilities to China.

William Zhao, chairman of Total China, said: "As our business is present across the entire value chain of China's energy industry, I believe the company will gain access to more opportunities in a fairer business environment." Total is working on several natural gas projects in China with CNPC and Cnooc.

An additional benefit of the new measures is that they open city gas deals to foreign companies. This could be attractive as part of the global shift to natural gas and as a market for their global LNG portfolios.

Even though these new measures will put pressure on Chinese energy companies, they are strong enough and competitive enough to hold their own.

An added benefit is that opening China’s upstream oil and gas sector to foreign companies could increase opportunities to compete globally for capital expenditure.

Removing restrictions is attracting increasing foreign direct investment to China. In 2018 this exceeded $138bn and was expected to be about 3% higher in 2019 despite the trade war with the US.

Chinese state oil companies have already tapped most of the best oil and gas fields onshore and offshore. The under-explored resources where foreign expertise would be most required are China’s vast shale oil and gas fields.

This explains why despite China setting up an ambitious target to produce 30bn m³/yr shale gas by 2020 – now reduced to 20bn m³/yr – looks more likely to achieve something closer to 17bn m³/yr. This would be only about 5% of China’s estimated gas demand in 2020. 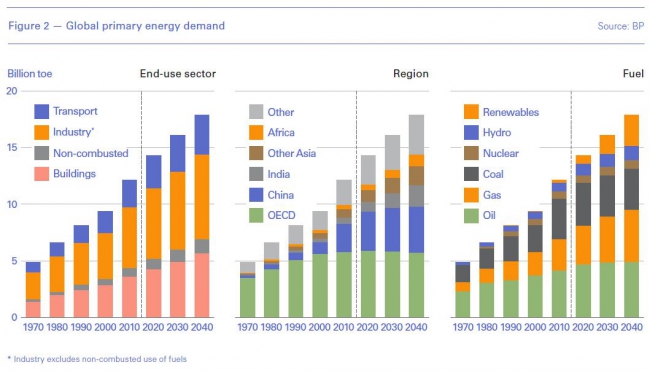 Shale oil is even more challenging. After more than a decade of exploration, shale oil made up less than 1% of China’s crude output in 2019.

In order to encourage investment in domestic oil and gas production, China also announced early December the launch of a national oil and gas pipeline company, named China Oil & Gas Piping Network Corp. This will give access to non-state oil and gas producers to the country’s pipeline network (Figure 1) at competitive rates, not available so far due to the ownership of most of China’s pipeline infrastructure by PetroChina.

With a fast-growing economy, China’s oil and gas demand has been increasing rapidly. According to BP’s Energy Outlook 2019, the country consumed 23% of global primary energy in 2017 (Figure 2), the biggest share of any country. By 2040 demand for oil is expected to increase by 19% and for natural gas by 166%.

The new measures to open up China’s oil and gas sector are a start. However, as Lin Boqiang said, detailed follow-up policies and practical implementation will be needed to encourage private and foreign companies to participate.

Oil and gas exploration is a risky business, requiring long-term investment and commitment even at the best of times.

And it is mostly foreign oil companies that have the advanced technology knowhow and financial might needed to unlock China’s promising shale resources.

But given the poor quality and complex geology of such resources, at least initially the response by foreign oil companies may be limited, unless high-quality assets are also made available. It may take time before these measures lead to the competitive environment they were designed to do.

In addition, it is not totally clear that all restrictions have been removed, for example regarding exploration and production rights bidding, transfer and sales, as well as exploration information management and operation of oilfield services. More regulatory changes may be on the way.

But the greatest challenge to lure IOCs into China’s shale will be profitability. Even though there is a hungry domestic market for any discovered oil and gas, given PetroChina’s low returns from its most promising shale discoveries, low profitability would be a turn-off.

There is huge investor pressure on IOCs to address climate change and maintain dividends, forcing them to give priority to big, easy to develop, high profit oil and gas fields with low production costs. The difficult geology and poor reservoir quality of Chinese shale reserves make this a challenge, as BP has already discovered. So the results from these new measures cannot be expected soon.

Permian Flaring Down in Q1: Rystad