He had articulated his views on how important this was in October, addressing the National Energy Commission (NEC) on upgrading energy production and safeguarding energy security.

He said then: “Coal remains China's primary energy resource and it is important to come up with sound plans for its exploitation and accelerate the development of coal transportation and power transmission channels.” He added: “to further diversify the energy supply, the country will strengthen domestic oil and gas exploration, deepen international oil and gas co-operation, as well as foster the development of renewable energy such as hydro and wind power.”

He took this further at the NPC, saying the country would safeguard energy security, promote cleaner and more efficient use of coal, develop renewable energy, improve systems for the production, supply, and sale of oil, natural gas, and electricity, and bolster energy reserves.

Missing from the NPC sessions was any emphasis on solving pollution. Rather, there was toning down on commitments to emissions targets, as China prioritises economic growth.

This shift towards energy security and coal was interpreted as a response to concerns resulting from tensions with the US. ‘Decoupling’ between the Chinese and the US economies accelerated this year, with the risk of the relationship between the two countries degenerating into a ‘new cold war.’ European concerns about China have also deepened.

Safeguarding China’s energy security became a priority in 2018 after the president, Xi Jinping, ordered increased exploration and production. With China’s economy slowing down and relations with the US already deteriorating, concerns over energy security have shot up the agenda in recent months.

In March, the government announced major project and infrastructure programmes and stimuli but there was no mention of initiatives prioritising clean energy or other green investment.

Energy security has increased concerns in China about the vulnerability of global supply chains and particularly oil supplies -- more so than gas. Oil import dependence is now up at almost  73%. As a result, and in line with the policy to boost energy reserve capacity – including storage capacity to guard against supply disruptions -- over the last few months the country has been building its crude oil stockpile and taking advantage of the low oil prices. 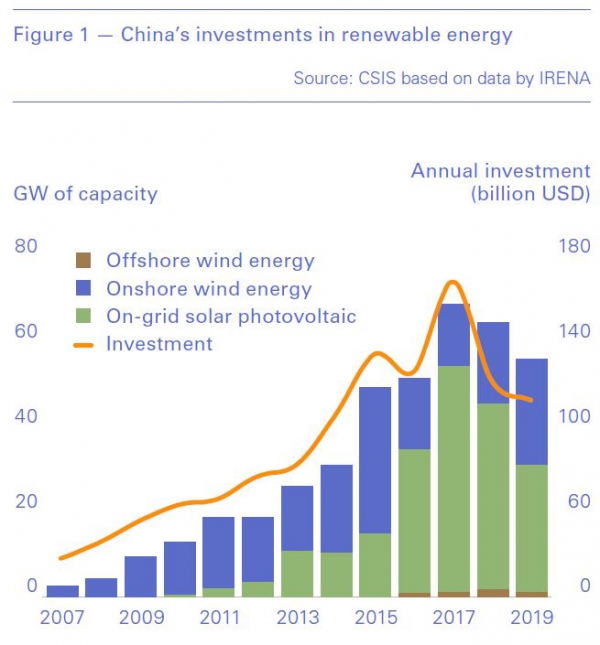 The country continues to be the largest source of renewable and nuclear energy growth globally, even though investment in renewables peaked in 2017 (Figure 1). In addition, in this year’s NPC, not only did Keqiang downplay China’s clean energy transition, but also there was no mention of the share of renewables in the country’s energy mix.

It is important to note that China has not changed its climate goals. It is still aiming to reduce CO2 emissions and improve air quality, but these are no longer a top priority. As a result of the relaxation of strict air pollution policies that favoured natural gas in October, the future of coal-to-gas switching remains uncertain.

According to IEA’s newly released Gas 2020 report, China’s natural gas demand growth slowed down to 8.6% in 2019, in comparison with 18.1% in 2018. This was partly due to slower economic growth, but also to more use of its domestic energy supplies.

Despite increasing economic activity, by June, 2020 gas demand growth was sluggish. The IEA states that “according to the National Reform and Development Commission (NDRC), apparent gas consumption increased by 1.6% year-on-year in the first quarter of 2020 (Figure 2). Thus, despite the fact that GDP fell by 6.8% over the same period, gas demand remained resilient. But the progressive restart of industrial activity in March and April had a limited impact on gas use as lockdowns in other parts of the world sharply reduced demand for exported goods.” By May growth slowed down to 1% year-on-year.

Looser environmental restrictions on coal use and policy decisions promoting cleaner coal are bound to have an impact on future gas demand.

At the NPC Keqiang said that the supply of natural gas should be guaranteed by co-ordinating production, storage, transportation and sales. He also said China will strengthen domestic oil and gas exploration, deepen international oil and gas co-operation and encourage the construction of oil and gas pipelines and LNG import terminals.

Following the major gas reforms last year, there is still intense pressure from the government on Chinese producers to increase domestic gas production, as part of the strategy to reduce over-dependence on imports. Without change, the IEA predicts that gas import dependence could increase to 53% by 2030, from about 43% in 2019.

But increasingly, China is relying on countries it considers to be long-term reliable partners, such as Russia, central Asia and the Arabian Gulf for its energy imports.

The ramp-up of the Power of Siberia gas pipeline from Russia will eventually increase gas imports at the expense of LNG. By 2025 it could be supplying about 8% of China’s gas demand.

On the other hand, geopolitical tensions make it less attractive for China to buy more US LNG.

The IEA expects post-2021 demand growth to more or less return to its pre-Covid-19 trajectory under its more optimistic scenarios. Under these conditions, China continues to promote gas. Demand will rise from 84bn m3 in 2019 to 128bn m3 by 2025, thanks to industry. Gas demand growth in the power generation sector will be more challenging, with coal-to-gas switching remaining limited. But the IEA admits that “the outlook is highly dependent on China’s future policy direction and recovery path in the post-crisis environment.”

However, it is interesting to note that the IEA steadfastly avoids referring to China’s major policy decisions on safeguarding energy security, favouring domestic energy supplies – including coal -- at the expense of imports, even though it admits that their potential impact is critical. This will become clearer when China publishes its 14th five-year plan (FYP) for 2021-25. 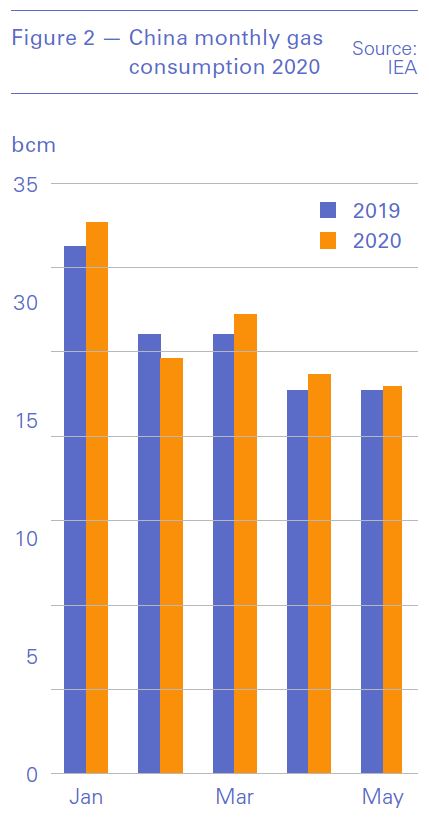 According to IEA data, during lockdown coal demand in China’s electricity mix declined by 5%, with the drop made-up by an equivalent increase in renewable power (Figure 3). Over the same period electricity consumption declined by 6.5%, but by the end of the year it is expected to return.

However, as a result of policy shifts – arising from increasing economic and energy security concerns – coal-fired generation was already starting to regain favour last year.

China’s coal power capacity has been capped at 1.1 TW by 2020. But the country is using less than a half the capacity at its disposal. But while it can easily meet rising demand, the China Electricity Council nevertheless suggested that coal-power capacity should grow to 1.3 TW by 2030.

This followed a notice issued by China’s National Energy Administration (NEA) in February that it is considering construction of new, ‘clean’, efficient coal-fired power plants in 2023 in order to meet forecast electricity demand by 2030. This took into account the country’s new energy security policies, including the need to reduce electricity prices. New coal-fired power plants are also part of the government’s plans to boost the sluggish, post-Covid-19 economy.

China is considering developing coal power in the northern part of western China -- where most of the coal is and which has very low population density -- and use an ultra-high voltage (UHV) trans-regional transmission system to deliver it to high-density population centres. This could also overcome clean air problems in major cities which has become a political hot potato.

According to NEA, there is also a change in the positioning of coal-fired power within the electricity system: it appears to be usurping the role normally played by gas. It says: “With the accelerated development of new energy sources and changes in power consumption characteristics, the system's demand for flexible power sources will continue to increase, and coal-fired units will assume more of the system's peak shaving, frequency regulation, voltage regulation, and back-up functions.” 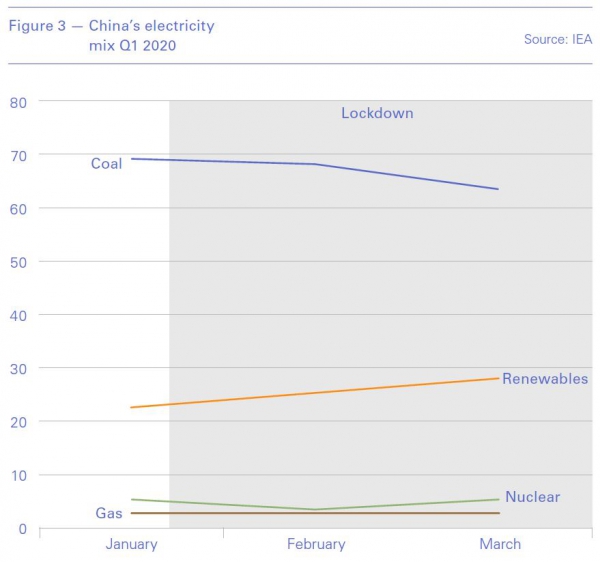 In addition, NEA expects that in the 14th FYP, unsubsidised renewables will have to compete with coal power. Coal will continue to be China’s primary energy source and central to its energy security plans, helping also to keep the lid on oil and gas imports.

The next FYP will set out key economic and political goals for 2021 to 2025 and is expected to be crucial in terms of defining China’s energy policies over the next five years. The final version is scheduled to be made public in March 2021 and then will come some more detailed sectoral plans.

All indications are that it will focus on independence as the US ‘decoupling’ threat grows.” China is expected to rely more on its domestic economy, as it addresses increasing concerns over economic growth and energy security, and to ease its reliance on the US in the post-Covid-19 world.

With China and the US at odds, the 14th FYP is likely to reflect the growing rivalries in the international system. A big question is where China will focus its resources to ensure future growth and economic prosperity.

It might decide to go for more autonomous development by cutting reliance on the US – and presumably its allies -- for technology, energy supply and exports in favour of its domestic market, or on overseas territories where it has established a presence one way or another.

In terms of energy the FYP is expected to focus on safeguarding energy security, on energy efficiency, boosting development of all domestic energy resources and maximising energy self-sufficiency. These will be key. Next year’s National People’s Congress will be crucial in terms of the future direction of China’s energy policies.