The government of Chile aims for green hydrogen to be one of the leading decarbonisation drivers, responsible for 20% of the targeted CO2 reduction by 2050. It also intends to become a major green hydrogen supporter, according to Johan Dreyer, a Chilean energy expert. The hydrogen will be produced from local renewable energy. Chile has some of the lowest-cost solar and wind resources in the world. 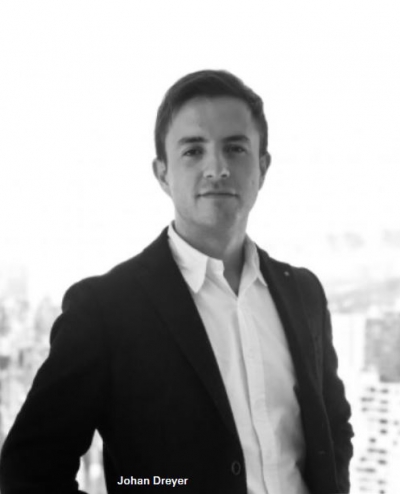 Dreyer, who works as New Ventures Manager for mining company GNA (Grupo Nortearido), explains there is a strong push for hydrogen in Chile from government as well as industry, with strong public support. “Chile is the sole net fossil fuel importer among South American countries. This dependence, together with a high exposure to climate change effects, has driven the country to aim for a complete decarbonisation of its energy mix by 2050, with hydrogen the preferred choice in the transport sector.”

At this moment, natural gas is the largest single source in the Chilean power generation mix, Dreyer notes, with a 19% share. Renewables together make up 25%. “In the 1990s we built four pipelines to import gas from Argentina, but then in 2007 they shut down their exports. Then we built two LNG terminals. Since 2010 we started importing large amounts of LNG. But now no new investment is made in LNG or in new CCGT plants. Natural gas will start to lose market share bit by bit from now on to renewables, which have already overtaken it in the power generation sector.”

Dreyer adds that the LNG facility in the north of the country – Mejillones – due to its proximity to low cost solar energy generation, could be transformed into a hydrogen exporting facility. The potential of green hydrogen export is estimated to be worth $9bn by 2030.

Coal will also lose market share, Dreyer predicts. “Due to the government’s aggressive decarbonisation policy, an agreement was reached in 2019 with local utilities for an early shutdown of 1GW of coal generation capacity by 2024, and the country’s entire remaining coal fleet by 2040 (3.9 GW).”

Dreyer believes the hydrogen market in Chile will develop in three phases. In the short term, the biggest off-taker will be the ammonia industry. “For example, in the North there is Enaex, Latin America’s largest producer of explosives for the mining industry, and therefore a leading ammonium nitrate producer. They import their ammonia from the U.S. and Trinidad and Tobago mostly. This is based on natural gas. They are looking to replace this with green ammonia based on locally produced green hydrogen. Engie and Enaex have entered into an agreement to work on this.” 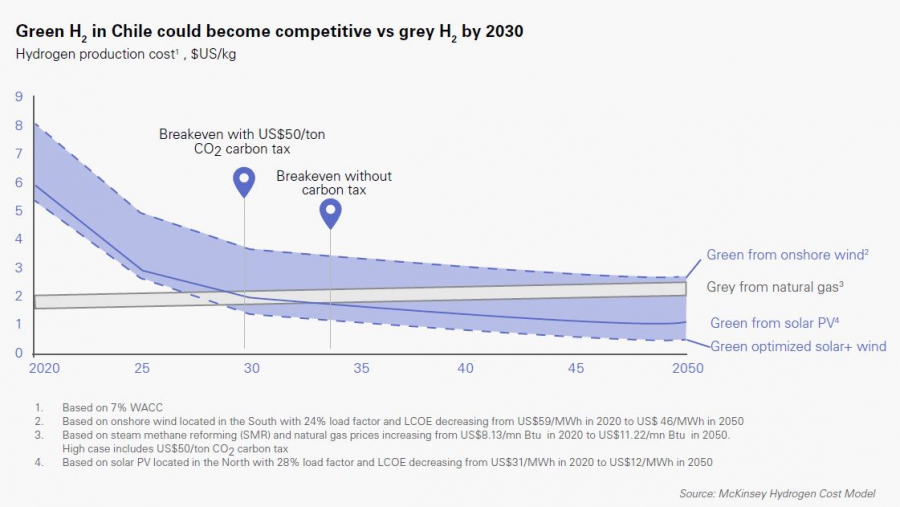 In the medium term, says Dreyer, the mining industry will enter the picture. Chile is, among other things, the largest copper producer in the world. “Mining giant BHP is exploring how to use green hydrogen in their operations for heating purposes.”

But the most attractive use for hydrogen in mining is in transport, says Dreyer. “Already a large water consumer (50 m3/second), the mining industry could completely substitute imported diesel with hydrogen in its operations, as hydrogen fuelled trucks consume an estimated 300 kg of hydrogen per day, an amount that can be produced out of only 3m3 of water by using electrolysis from renewable generation.”

In the longer term, Dreyer expects green hydrogen also to be used in urban transport.

Chile also has a great potential to become a hydrogen exporter, for example to the EU, says Dreyer. “According to the Hydrogen Council, Chilean green hydrogen will reach a production cost of $1.20/kg already by 2030. This will allow Chilean hydrogen exports from Atacama (based on solar energy) and Patagonia (based on wind energy) to be competitive against blue hydrogen in Asian, North American and European markets already during this decade.”

He notes that Chile has recently signed an agreement with the EU which will provide €350,000 to pay for feasibility studies. “The cost of feasibility studies is often a big bottleneck in hydrogen projects, as this is still a maturing technology.”

Having said all this, Dreyer concedes the Chilean push for hydrogen is still in an early phase. “Everyone says it will happen, but few concrete moves have been made. The government intends to publish a national hydrogen strategy in November. But until the mining industry is fully committed, local off-take will remain limited, leaving hydrogen exports as the most attractive business opportunity during this decade.”

Dreyer does not think heavy government subsidies will be needed to move the market forward. “The cost of electricity in Chile plummeted from $129/MWh in 2013 to $33/MWh in 2018. This was mainly due to the high cost of imported fossil fuels for power generation, allowing renewables to be competitive from the beginning and rapidly replacing fossil fuels as the most economic option for power generation. The same will happen with hydrogen in the transport segment, as low cost renewable energy will make green hydrogen cheaper than imported diesel.”