US multinational Chevron Corp.’s acquisition of Noble Energy, Inc., which would make it the new owner of Israel’s mammoth offshore natural gas fields, is an “incredible” reflection of the warming of ties between Israel and the Gulf states, according to Prof. Brenda Shaffer, an international energy expert.

“It indicates that the country is no longer a taboo for the international energy industry,” Shaffer said in a phone interview with The Times of Israel. “These firms used to shy away from doing business in Israel because of concern of an Arab boycott, as many of them have assets in the Arab world.”

“Chevron has many holdings in the Gulf countries,” she noted. “The fact that it could now be the owner of assets in Israel reflects the change that is taking place in the ties between Israel and the Gulf countries, and shows that there is no more boycott.”

Gulf states, including the UAE, Kuwait, Saudi Arabia and Qatar, have no formal diplomatic ties with Israel, but have increasingly begun to cooperate openly after years of rumored back-channel discussions between them over the mutual enmity of Iran. 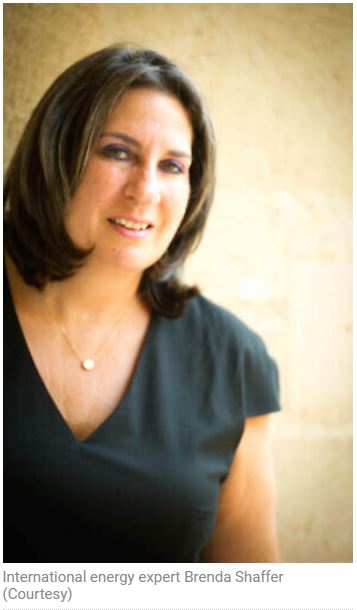 Shaffer is a faculty member of the US Naval Post-Graduate School and a senior adviser for energy at the Foundation for Defense of Democracies think tank in Washington, DC. She has also served as an adviser on energy policy in Israel’s Prime Minister’s Office and the Enegy Ministry.

Chevron on Monday said it had entered into a definitive agreement with Noble Energy to buy all of the outstanding shares of the Houston, Texas-based oil and gas explorer in an all-stock transaction valued at $5 billion, making it the biggest oil deal since the start of the coronavirus pandemic.

Noble Energy has stakes in Israel’s mammoth gas fields Tamar and Leviathan. It got a license to explore for oil and gas in Israeli waters in the early 2000s, when no other international player in the industry was willing to do so out of concern of an Arab backlash.

Chevron made its first two major discoveries in the Middle East in the 30s, in Bahrain and in Saudi Arabia, and is the only global energy firm that has had a continuous presence in Saudi Arabia since, the company says on its website. The firm also has assets in Kuwait and Iraq.

Chevron “obviously thought this out, and I am sure they assessed how this will impact their existing business in the Gulf and concluded there was no significant risk,” Shaffer said. “There is no way they did this on a whim.”

The Chevron-Noble deal was made possible after oil prices plunged to historic lows in April, as the coronavirus spread and lockdowns put the brakes on global demand. And even as prices have recovered from their lows, they remain depressed due to a renewed surge in coronavirus infections, making oil and gas assets cheaper.

The Leviathan offshore natural gas field, Noble’s largest discovery to date, started production in December 2019. Noble has a 39.66% stake in the field, and is partners in the site with Ratio Oil Exploration (1992) LP., which holds a 15% stake and Delek Drilling LP, with a 45.43% stake.

The acquisition is good news for Israel, Shaffer said. “Noble Energy did a great job here and Israel is appreciative that they were here when no one else was willing to come and explore.”

The Texas-based explorer “also made a lot of money from its Israel assets,” Shaffer said. “I think that having a company of the level of Chevron will make it even better on the technology and environmental level, increasing the quality of its operations.”

Israeli environmentalists have complained about the number of breakdowns on Leviathan’s processing platform over the months since the start of its operations, and about the location of the platform. Consumer groups also protest the fact that the long-term contracts signed to provide the gas to Israeli customers are at a price that are significantly higher than prices in the US.

Chevron may end up selling the Israeli assets

Shaffer said it is still not clear whether Chevron is planning to hold on to the Israeli assets or to sell them on, depending on purely commercial factors, she said.

In its statement on Monday, Chevron underlined the importance of Noble Energy’s Israeli assets.

“That does indicate that they are attracted to them, but in the end, they may actually sell them, mainly because of commercial reasons, and not for reasons connected to Israel,” Shaffer said. “Companies often sell assets even though they are profitable and good, but other assets may be more profitable. It is not enough that something is good; it has to be better than the alternative. And there is the issue of not being geographically spread too thin, and having in place the right administrative infrastructure.”

Finding a buyer for the Israeli assets may not be that difficult, she said. “These are very profitable assets. Israel is a stable and high-paying reliable market,” and there is demand from Jordan and the Palestinian Authority. “For a company which has the long-term perspective, it is a high paying valuable market. ”

Shaffer dismissed the idea that US political maneuvering was behind the deal.

“This is not how it works with US companies. There are not coordinated with the US government and they don’t set their investments by US government preferences. In no way is this connected to anything political in terms of US policy. They operate completely independently.”

Meanwhile, shares of Noble Energy’s partners in Leviathan and Tamar surged for a second day on Tuesday following the news of the deal. Delek Drilling shares jumped 30% on Tuesday, after rising 23% on Monday. Ratio jumped 26% percent, after surging 25% on Monday. Tamar Petroleum and Isramco Negev LP, which hold stakes in Tamar, on Tuesday jumped 7.4% and  6.4% respectively, after rising 6% and 5% on Monday.

Ella Fried, an analyst at Bank Leumi Le-Israel, said in a note to investors that she thinks the chances of Chevron selling its Israeli assets are high, but that a buyer won’t be so easy to find.

There is “a certain chance” that in the event of a successful acquisition, Chevron will stay with Noble’s operations in Israel, “but chances are that operations will be sold,” she wrote. “In such a case, it will be very difficult to find a suitable replacement in terms of capabilities and of resilience to stand up to complex geopolitical situations.”

Originally published by The Times of Israel

Explainer: Why US Natural Gas Prices Have Increased During The Pandemic [GGP]