Chesapeake benefits from pivot from gas to oil [NGW MAGAZINE]

Chesapeake Energy’s second-quarter results, released in August, illustrate the company’s shift in focus from natural gas to oil. It comes as shale gas drillers continue to struggle with low natural gas prices – and while crude prices are also languishing, Chesapeake is hoping that a greater proportion of oil in its production mix will turn its performance around in the coming years. Other producers with both oil and gas assets may be tempted to follow suit in looking more to liquids plays. However, pure play gas producers can be expected to suffer in the near term.

Pivoting more towards oil is one of several steps Chesapeake has taken in recent years to overhaul its business. Since Doug Lawler became CEO of the company, replacing the controversial Aubrey McClendon, the company has been shedding non-core assets in a bid to pay down its considerable debt load.

However, the company then made the surprising move of taking on a major acquisition, agreeing in late 2018 to buy WildHorse Resource Development for just under $4bn. The acquisition gave Chesapeake roughly 420,000 net acres in the Eagle Ford shale and Austin Chalk formations in Texas, with about 80-85% of this still undeveloped. The company said at the time that its projected adjusted oil production mix was expected to increase to roughly 30% of total output in 2020, compared to around 19% in late 2018. The additional oil production from the WildHorse assets is now starting to show up in Chesapeake’s quarterly results.

Oil up, gas down

In a sign that its pivot to oil is already paying off, Chesapeake reported that its oil production in the second quarter of 2019 reached a record of 122,000 barrels/day. This marks a 36% year-on-year increase, or 10% when adjusted for asset acquisitions and sales. Oil now comprises 25% of the company’s production mix – also a record high.

Meanwhile, Chesapeake’s gas production was 2.0bn ft³/d, down from 2.3bn ft³/d in the second quarter of 2018. The company noted that despite lower average prices for both the oil and gas it sold, its cash margins increased year-on-year in the most recent quarter. This was primarily attributed to the higher proportion of oil in the company’s production mix, as well as a decrease in gathering, processing and transport (GP&T) and general and administrative (G&A) expenses.

The company reported net income of $98mn, which was an improvement from a net loss of $249mn in the second quarter of 2018. Chesapeake did not respond to NGW’s queries about its performance.

Looking ahead, the company said it expected to allocate less capital to its gas assets, while focusing on growing its oil operations. As a result, it anticipates a double-digit percentage decline in gas output in 2020, while its oil production shows a double-digit percentage increase. One of the first places this will become apparent is in Louisiana’s Haynesville shale, where Chesapeake said it would drop its sole active rig “in the near future”.

This was described on the company’s earnings call as a move based on “prudent capital allocation” in a weak gas price environment. However, Chesapeake views the economics of its Marcellus shale acreage in the northeastern US as being far more attractive. Chesapeake’s executive vice president of exploration and production, Frank Patterson, said on the earnings call that the company would rely on its core gas assets “for efficient free cash flow delivery”. Nonetheless, some activity is expected to be scaled back in the Marcellus as well. 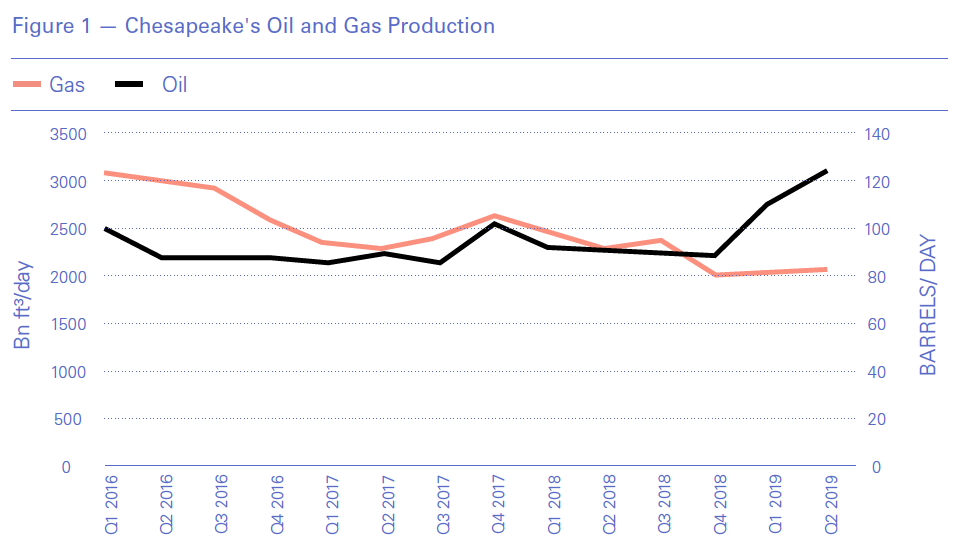 Chesapeake’s shift to oil has been welcomed by analysts, but aspects of its performance are nonetheless being criticised. Analysts from financial services firm Raymond James & Associates wrote in a note that they applauded Chesapeake’s pivot to oilier assets. However, they warned that “the preliminary 2020 outlook discussed by management suggests that the cash flow outspend gap remains much wider than we had previously anticipated”.

As a result of its concerns, Raymond James lowered its rating for Chesapeake to Market Perform from Outperform, saying: “Our original turnaround thesis on the company is going to take longer to play out than we originally forecast”.

Chesapeake needs to sell more of its non-core assets, but the analysts warned that there was not much appetite for acquisitions currently, and the low gas price environment could prove to be an obstacle to more asset sales.

Another financial services firm, Morgan Stanley, was more bullish about Chesapeake’s performance, maintaining its Overweight rating for the company and describing its second-quarter results as strong.

Chesapeake is not the only gas producer pulling back in the current gas price environment – and the Haynesville shale is among the regions taking a hit more broadly as a result. In July, gas permit applications in the play fell by 18 month/month to 150, according to investment banking advisory firm Evercore ISI. This occurred as overall permit applications for unconventional gas alone rose by 26% month/month, but fell 12% year/year, primarily because of the reduction in Haynesville activity.

Among those scaling back is Comstock Resources, which is primarily focused on the Haynesville. The company said in its second-quarter earnings call that it would release one to two of its drilling rigs in the play, which it expects to average 8-9 in total over the course of 2019. Comstock will also revise its production growth expectations for 2020 down somewhat because of the reduction in its drilling programme, from around 15% previously to around 10-11%.

The pullback is not affecting the Haynesville alone, though. Even Marcellus producers are cutting back activity, despite it being comparatively cheap to drill in the region. EQT, which is the largest gas producer in the US, has recently said that it is not prioritising production growth, though the company is overhauling its strategy after a leadership change so may not be entirely indicative of broader trends.

Southwestern Energy said it is planning to scale back its drilling from an average rig count of six in the first half of the year to two by the end of the third quarter of 2019.

Cabot Oil & Gas also said that while it was maintaining its three rigs in the Appalachian Basin until the end of this year, it would slow spending and drilling in 2020 owing to low gas prices.

For drillers such as Chesapeake, who own a mix of oil and gas assets, focusing on more liquids-rich properties is likely to be an attractive option for now. Pure play gas producers find themselves in a more difficult position, however. Given investor pressure to rein in spending, such producers are unlikely to target oil acquisitions like Chesapeake did. More financial pain appears to be in store.