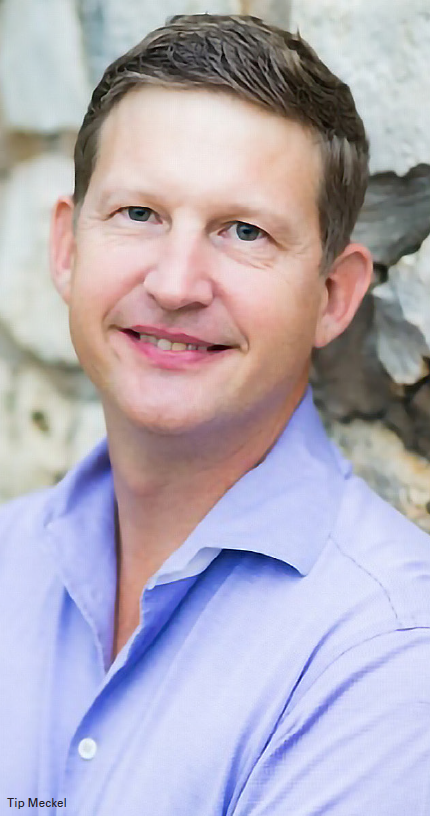 According to Meckel, co-author of a recent paper outlining the possibilities of CCS in the Gulf of Mexico, there are no technological barriers to build large-scale CCS facilities connected to industrial coastal hubs. “It’s a question of the right incentives.” He is optimistic about the future of CCS. “I am predicting that in a few decades we will be shipping CO2 across the world like we do other commodities now.”

Is the US about to move into carbon capture and storage (CCS) in a big way? There are signs that it might be. On April 19, Joe Blommaert, president of ExxonMobil’s Low Carbon Solutions unit, wrote in a blog post that “we believe the time is right for a large-scale collaboration in the United States between government at every level, private industry, academia and local communities to create an “Innovation Zone” approach to dramatically accelerate CCS progress.”

Blommaert noted that “ExxonMobil has been assessing the concept of multi-user CCS hubs in industrial areas located near geologic storage sites, such as depleted oil and gas reservoirs”, and had concluded that Houston would be “the perfect place” for such a concept.

A month later, on May 19, four research scientists at the Gulf Coast Carbon Center (GCCC), part of the Bureau of Economic Geology at the University of Texas at Austin, published a scientific paper, “Carbon capture, utilization and storage hub development on the Gulf Coast,” which concluded that “the stage is set for a new carbon storage economy to emerge along the Gulf Coast”. 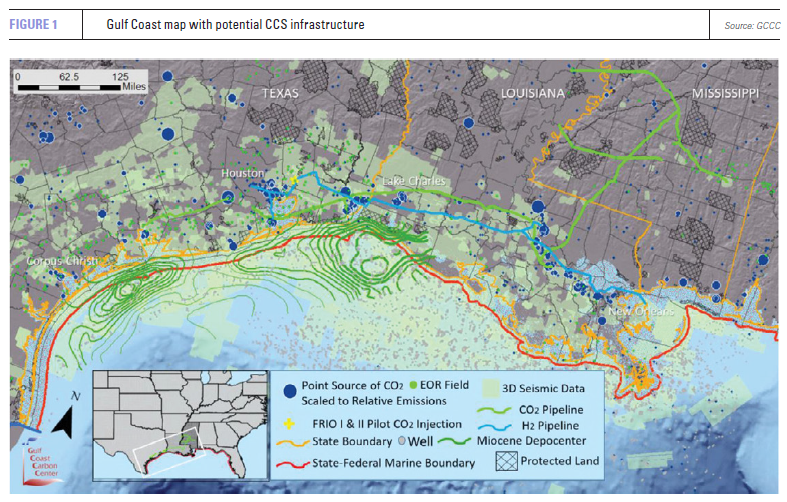 Tip Meckel, one of the authors, who is part of a team of nine PhDs doing full-time research on CCS at the GCCC, says the two releases are no coincidence. “What we see happening all along the Gulf Coast is CCS concepts being developed that are about to burst into active development.” The US, he notes, has sometimes been a laggard in CCS and sometimes it’s been ahead. “Right now, we are pretty comfortable that we are about to surge ahead.”

There are several reasons why the Gulf Coast is the ideal place for CCS, notes Meckel. It has large industrial clusters, including strongly expanding LNG facilities, where CO2 emissions are concentrated. There is a lot of relevant experience, know-how and infrastructure, and, the study shows, huge storage potential offshore. “In the past, CCS was focused on post-combustion power plants, not the most efficient solution, though there are some successful projects, like PetraNova here in Texas. Now the focus is much more on heavy industry and the gas sector. Gas has become much more important because of the shale gas revolution.”

Meckel points out that all over the world the same pattern is emerging: “industrial clusters in coastal regions are all pivoting towards offshore storage. You see this in Norway, the UK, the Netherlands, Japan.” He notes that for the US LNG sector in particular emission reductions have become a burning issue. “We went from planning import facilities to building export facilities, which are still growing strongly. Some of our LNG cargos were refused in France and Ireland. We need to make LNG a low-carbon option. That’s related mostly to fugitive methane emissions of course, but it will also spill over into how the LNG value chain can become ‘greener’ overall.”

LNG terminals have two primary sources of CO2, as explained in Meckel’s paper: the acid gas removal unit (AGRU) used to purify the incoming methane delivered by pipeline, and the various compression and thermal units. The AGRU’s involve some 100,000 metric tons of CO2/per train/year, the compression units emit 10 times as much. Each LNG terminal could capture 5 to 10mn mt of CO2/ year. (See box for more figures.)

The main message of his paper, says Meckel, is that the Gulf Coast region has all it takes to become a world leader in CCS. “The paper captures a decade of work that we have done. It was our way of telling our stakeholders that if we can’t do it here, we can’t do it anywhere. We know how to capture CO2 and transport it. We have been doing it for 20 years. The phone book is thick when it comes to entities that you can call to do CCS for you. They are all here.”

CCS is now about scaling up, says Meckel. “We know we can do single projects, that’s not the issue. This is the most sensible place to do CCS at scale.” A particular advantage in Texas is that for historical reasons the state has jurisdiction over coastal waters over ten miles out, more than other states, which usually control just 3.45 miles. “And we have got 1,200 miles of coast. That means you have a single licensing authority controlling over 12,000 square miles of space to store CO2.”

The state of Texas is currently offering leases for offshore tracts for CCS projects in the Port Arthur area, says Meckel. “We expect them to announce the leases pretty soon. That means there will be active leaseholders who will have put real money into this. They will be getting a lot of calls from parties that will want to work with them because they will have storage capacity. In the past companies were not sure about the storage options.”

Meckel suspects that there have not been many announcements yet because companies are hoping that the current tax credit, at $45/mt, may be enhanced. The American Petroleum Institute has been lobbying hard to raise the floor price on this. “What is needed now are incentives. CCS can be horribly expensive, although costs are coming down.” The costs of capture are the biggest part, says Meckel. “Once the curve of the tax credit crosses with that of the capture costs, you will see a lot of action.” He adds that according to the IEA and other analysts, without CCS the energy transition will be much more expensive. 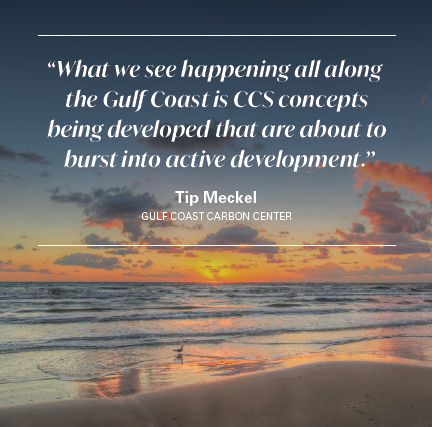 But we do need CCS in the first place? Many environmental NGOs do not think so. They want to see the economy move away from fossil fuels altogether. Recently over 500 organizations from Canada and the US told the Canadian government that “carbon capture hinders the energy transition”.

Meckel disagrees. “If 100% renewable energy were possible, I’d be all for it. But in many places it’s not. In Texas we have been building wind farms like crazy. We are the biggest wind power producer in the US. But wind still only covers some 20% of electricity demand – electricity, not energy.”

According to Meckel, many people are forgetting that oil is not just used for transport, and gas is not just used for home heating. “The majority of hydrocarbons are refined into other products, like plastics and fertilizers. You can’t replace that with renewables. Same story with steel and cement. You can’t decarbonise those without CCS. We do see a trend in the US where energy companies are expanding their renewable energy portfolio very rapidly but they are balancing this with fossil fuels.”

Direct air capture, he adds, will not change the overall picture. “You see this going forward in places where there is very cheap or free electricity. But trying to strip CO2 out of the atmosphere in its most dilute concentration is always going to be more expensive than capturing it where it is emitted. With direct air capture you are working on the hardest part of the system.”

A hopeful sign for CCS is the involvement of tech companies like Microsoft, which has joined the flagship Northern Lights project in Norway. “Everywhere you look in CCS you see joint ventures,” says Meckel, whose research group has close contacts with colleagues in Europe and Japan. “We would have liked Microsoft to join a project in the US, but they will no doubt learn a lot which they will bring to projects here. I also expect to see other companies to show interest. Think of aviation companies for example.”

Perhaps the biggest nut to crack, says Meckel, is related to the global playing field. “Each country is now implementing its own approach. Ultimately the answer must be a global price on carbon, as has been agreed in the Paris Agreement.”

One of the biggest economic challenges will be the transport of CO2. “There is research being done in the US on onshore transport. There is the Alberta Carbon Trunkline in Canada. These are public-private projects that will facilitate the entire CCS value chain. The US infrastructure bill has some funding in it for CO2 transport and there is a lot of private capital interested as well. We see the same happening in Europe.”

And Meckel sees an international market emerging as well. “I see the transport of CO2 as a sleeping giant about to be awakened. I predict that in 30 years we will be shipping CO2 around the world like we do other commodities now.”

For the gas sector this is particularly interesting. “You don’t want to ship LNG out and bring back empty tankers if you don’t have to. There are already companies like Mitsubishi building CO2 transport ships. The idea is to make them as compatible with LNG and LPG ships as possible. We can see LNG being taken out of the Gulf of Mexico and bringing CO2 back to be injected here offshore.”

All that’s for later. Right now, says Meckel, the story is that “the technical work has been done. What’s left to do is pick the locations, get the permits and incentives in place, and proceed.”