In November, US companies Freeport LNG and Talos Energy became the latest in the LNG sector to announce plans for carbon capture and storage (CCS). The first CO2 injection could take place by the end of 2024, according to the companies.

The CCS facility will be located next to the Freeport LNG site, which has liquefaction capacity of 15.3mn mt/year at three trains, with a fourth in development. The project will use a sequestration site less than half a mile from the point of capture, requiring only a short pipeline, reducing capital and operating costs.

Freeport LNG joins a growing band of LNG producers looking at CCS as a way to reduce the carbon footprint of LNG production. The aim is to position natural gas and LNG as part of the energy transition and reap a competitive advantage from the marketing of low carbon gas.

However, CCS in the power sector has a long and chequered history with a raft of projects in Europe and the US having failed to get off the ground or reach completion, despite significant public funding. In contrast, the natural gas industry can claim an extensive and successful track record in this area, one which bodes well for the integration of CCS into the LNG value chain. 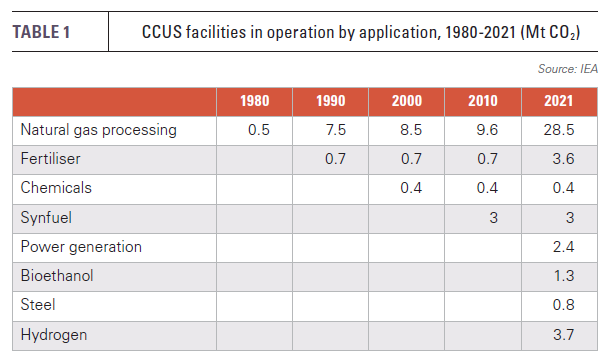 According to the International Energy Agency (IEA), there are 21 large-scale carbon capture utilisation and storage (CCUS) facilities worldwide, capturing and storing 40mn metric tons of CO2 annually (see table 1). Some of these have been operating for decades, notably Equinor’s Sleipner CCS project in Norway, the world’s first commercial project, which came on line in 1996. The US gas industry also has extensive experience in the field of CCS. The country has about 8,000 km of CO2 pipelines, primarily used to transport CO2 to oilfields for enhanced oil recovery.

CCS costs broadly are inversely related to the partial pressure of CO2 in the feed gas. Higher CO2 partial pressures allow the CO2 to transfer more rapidly from the source gas to the solvent, adsorbent or other media used to capture the CO2. This means lower energy input for separation.

Higher pressures also reduce the gas volume/mt, reducing equipment size and capital cost. For almost all CCS applications, for example post-combustion gas flues, the gas stream pressure is close to atmospheric pressure (101.3 kPa). In natural gas processing pressures are much higher, varying from 900 to 8,200 kPa. Higher partial pressures also increase the range of media that can be used as an absorption or adsorption agent.

LNG plants are large and economies of scale play a big role in CCS economics (see table 2). The Global CCS Institute estimates that a 10-fold increase in scale yields a cost saving of about 60% per unit of production from a single CCS plant. Moreover, the economies of scale become increasingly important as partial pressures become lower.

These two factors, partial pressures and scale, give rise to very large differences in CCS costs across different industries, but also indicate that CCS in the LNG sector should provide some of the lowest-cost applications.

Another key advantage of CCS from LNG plants is the likely proximity of geological storage sites in the same or similar formations from which the natural gas is sourced.

CO2 emissions from LNG plants start with the feed gas, from which CO2 must be removed to avoid solidification in the liquefaction process. Depending on the nature of the gas field, the CO2 content can vary considerably. CO2 is removed in an acid gas removal unit (AGRU) and can already be considered captured.

Typically, at present, this CO2 will be vented into the atmosphere. However, at Norway’s Snovhit LNG, the feed gas for which has 5-8 mol% of CO2, captures and stores about 0.7mn mt/yr CO2 from its AGRU. Norway’s carbon tax was a prime motivator in developing CCS at Snövhit.

In addition to the feed gas, emissions depend on the technology used in the LNG plant, its configuration and its efficiency, but the majority come from the combustion of fuel for compression and power generation purposes.

According to a techno-economic evaluation of CCS in LNG plants, conducted by the IEA and published in October 2019, the specific power requirement for liquefaction is in the range of 0.30-0.40 kWh/kg for baseload liquefaction technology, leading to emissions of 0.20-0.28 mt of CO2/mt of LNG for industrial gas turbines and 0.15-0.21 mt of CO2/mt of LNG for aeroderivative gas turbines.

CCS provides a range of possible configurations, incorporating both well-tested and emerging technologies, many of which should deliver cost reductions as CCS develops at greater scale. However, LNG developers are likely to choose technologies which have a proven track record and which do not put at risk the operational reliability of their LNG plants.

Post and pre-combustion techniques remove about 85-90% of the CO2 from combustion processes, but pre-combustion produces gas rich in hydrogen, which means additional process complexity and process equipment. The key issues are the integration, operability and reliability of plants.

Post-combustion techniques can be applied to any combustion system. The main downside is a much higher heat requirement to regenerate large amounts of solvent. Absorption processes also require large plot areas to site equipment, stainless steel to prevent corrosion and waste disposal from solvent reclamation. In addition, the CO2 captured is low pressure and water-saturated, requiring dehydration and compression.

Oxyfuel combustion – burning a fuel using pure oxygen rather than air – has a much higher CO2 removal rate of 90-97% and removes the need for chemical absorption and solvent use. However, oxyfuel combustion of natural gas is not a mature technology and would again increase process complexity and equipment requirements.

In contrast, amine-based absorption solvents are commercially available with reduced regeneration energy demands, and have lower degradation and corrosion characteristics. Moreover, waste heat from the LNG plant can be used to meet much of the heat requirement for solvent regeneration.

As such, post-combustion appears the most likely route for LNG plants to minimise potential disruption to production and keep process complexity to a minimum, while also being the best fit for retrofitting existing LNG plants, provided sufficient space exists on site. For the same reasons, plant owners are likely to adopt amine-based chemical absorption as the means of carbon capture.

Adding a CCS plant is a major additional capital cost, but one which LNG plant operators increasingly see as necessary to maintain LNG’s social licence. For a typical LNG train of 5mn mt/yr, the carbon capture plant will need capacity of 3,000 mt of CO2/day, equivalent to about 1mn mt of CO2/yr, according to the IEA’s study, the Techno-Economic Evaluation of CO2 Capture in LNG Plants.

The IEA’s base case assessment assumes a 4.6mn mt/yr LNG train located on the US Gulf Coast, using standard C3MR liquefaction technology. The natural gas price is put at €6 ($6.8)/GJ (LHV) and the discount rate at 8%. Transport and storage is assumed to cost €10/mt of CO2. The plant runs at 85% and the capture rate is 90% with a storage capacity of 1mn mt/yr. It includes capture from both the AGRU and post-combustion from the flue gas.

With CCS, total plant emissions fall from 1.35mn mt/yr to 0.45mn mt/yr, a reduction of 66.7%. This is significantly below the ‘capture rate’ because flue gas and the AGRU, although the largest, are not the only sources of plant carbon emissions.

1.06mn mt of CO2/yr are captured, which results in CO2 emissions avoidance of 0.90mn mt/yr. The difference between CO2 captured and CO2 avoided reflects the energy requirements of CCS and an increase in gross emissions as a result of adding the technology.

When CO2 emissions costs are set against the capture costs, the study estimates that a carbon price would have to be a minimum of €129/mt of CO2 to justify the installation of CCS, capturing emissions both from the feed gas and the AGRU.

A sensitivity analysis which considers different plant sizes, technologies, gas prices and other variables such as the discount rate, gives a range for capture costs of €13-57/mt of CO2 and for avoided CO2 of €14-78/mt of CO2. Large LNG trains, for example in Qatar, are expected to benefit from economies of scale, resulting in a 12% reduction in capture and avoidance costs. 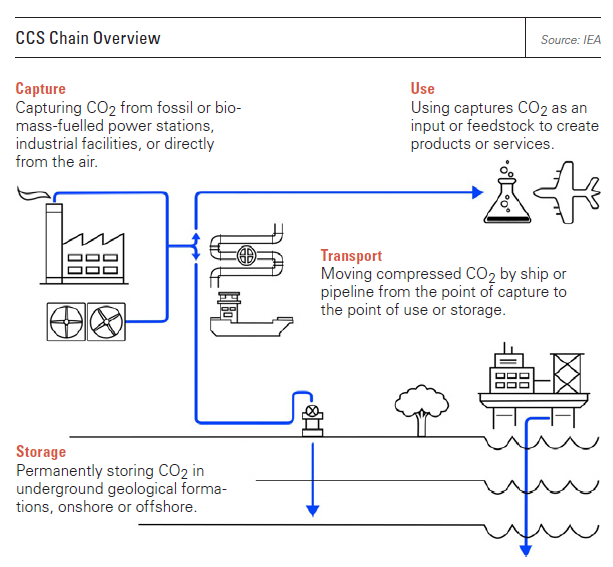 In addition, the base case represents a first-of-its-kind plant. The study estimates that when a series of CCS facilities have been built, costs should fall by about 30%.

The study estimates that a carbon price or tax of only €30/mt of CO2 could be sufficient to incentivise CCS from the AGRU only.

However, small-scale LNG (SSLNG) and floating LNG (FLNG) both face significant problems when it comes to CCS. For SSLNG, post-combustion capture looks the most appropriate option, but their small size and the need for land and higher energy requirements suggests CCS would be a very expensive option.

This is because, despite the smaller scale of capture, the capital costs are still high. Compared with its base case – a 1mn mt/yr CCS plant costing €755mn – total capital requirement for a 0.3mn mt/yr CCS plant would be €300-€500mn, according to the IEA study. In other words, roughly 53% of the cost for 30% of the CO2 capture.

Similarly, the space requirements for post-combustion CCS and additional energy generation makes it a no-go for FLNG, which, again like SSLNG, are generally much smaller than a baseload LNG train.

The study sees reservoir CO2 separated in the pre-treatment process as the only feasible option, but this would still present significant technical challenges for the design and operation of FLNG plants, which would impact project economics. Storage would also have to be near the FLNG site and would require injection equipment, again requiring more space and therefore larger FLNG vessels or a separate CCS vessel.

Combining CCS with LNG production has not been without its teething pains. A project undertaken by US major Chevron at Gorgon LNG in Australia came on-stream just over three years late with the joint partners having committed to an average capture rate of 80% from the start-up of Gorgon LNG in March 2016. The facility has injected 5.5mn mt of CO2 so far, but has had to buy 5.23mn greenhouse gas offsets to make up for the shortfall in promised emissions reductions.

Building the storage facility was one of the key conditions placed on the project by regulators. A capture rate of 80% means annual storage of about 4mn mt of CO2. Delays and technical difficulties hampered the facility’s start-up. Issues with sand clogging parts of the storage system since commissioning have meant storage levels below those anticipated.

The cost of the project is estimated at A$3.1bn. CO2 is captured from the gas processing plant feeding Gorgon LNG on Barrow Island and sequestered 2.5 km below ground. In total, the project is expected to store 100mn mt of CO2 over its 45-year life span.

Kurdistan under the microscope amid Iraqi political limbo [Gas in Transition]