Correction: On December 9, NGW said that a gas-fired plant to be built at Knottingley in Yorkshire was among several large CCGTs successful in UK 2020-21 capacity auctions. This is incorrect and due to our misreading of the provisional results. A corrected version of the story follows.

National Grid, as operator of the government’s capacity market auction held on December 8 for delivery from October 2020 to September 2021, has said that after 11 rounds the provisional result is that the clearing price (in 2015-16 prices) is £22.50/kW.

The aggregate capacity of capacity market units awarded is 52,425.302 MW.

By far the largest type awarded by technology was gas-fired combined cycle gas turbine plants (CCGTs), at 22,596 MW (43% of the total). Some CHP plants awarded are also likely to be gas-fuelled. 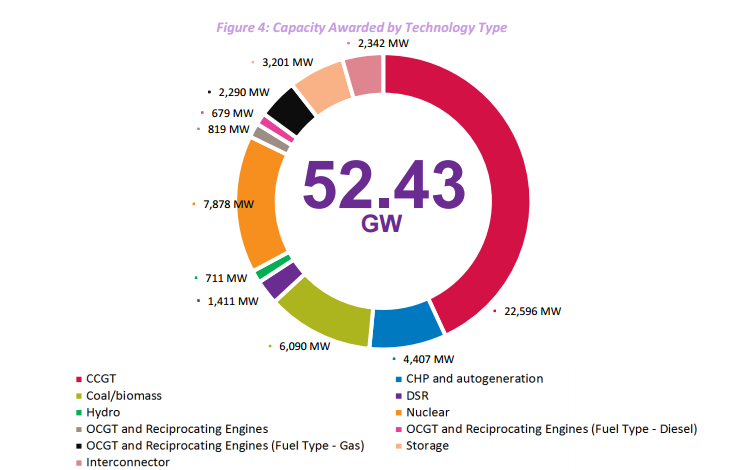 UK utility SSE said December 9 in a stock market filing it secured provisional agreements to provide 3,239 MW – composed of 2,323 MW of gas-fired and embedded power generating plant; 873 MW of hydro electric and pumped storage plant; and 43 MW of demand-side response. The total value secured by SSE is £72.9mn – to be received pro-rated throughout the delivery year. Its Peterhead gas and Fiddlers Ferry coal plants were unsuccessful.

Coal and biomass generator Drax said it provisionally secured contracts to provide 1,203 MW of derated capacity from existing units worth £27mn. However it said that two Open Cycle Gas Turbine (OCGT) development projects were unsuccessful and might now participate in an auction next year.

All the provisional agreements still require sign-off from the Business and Energy Secretary of State, Greg Clark, who said: “Our homes and businesses need an electricity supply they can rely on all year round. We’ve provided them with that certainty, at a low cost to bill payers, years in advance."

The government said the auction clearing price of £22.50/kW was lower than many had forecast, ensuring a secure energy supply at a fair cost to bill payers, and that it has been estimated that the capacity market will have a net cost of around £2/year on average for bill payers over the long-term.