Canada’s beleaguered natural gas producers struggled through the first half of 2019, clinging to the hope that some of the issues that have plagued their existence the last few years – sinking commodity prices and an inability to get their product to market – will eventually be in their rear-view mirror.

Yet again, as the summer maintenance season on TC Energy’s Nova Gas Transmission Limited (NGTL) system approached in the second quarter, commodity prices at the Aeco trading hub plunged below C$1 (US$0.75)/’000 ft3. On some days, when already-scarce access to storage all but disappeared, the Aeco spot price sank into negative territory and some producers were forced to pay customers to take their gas. 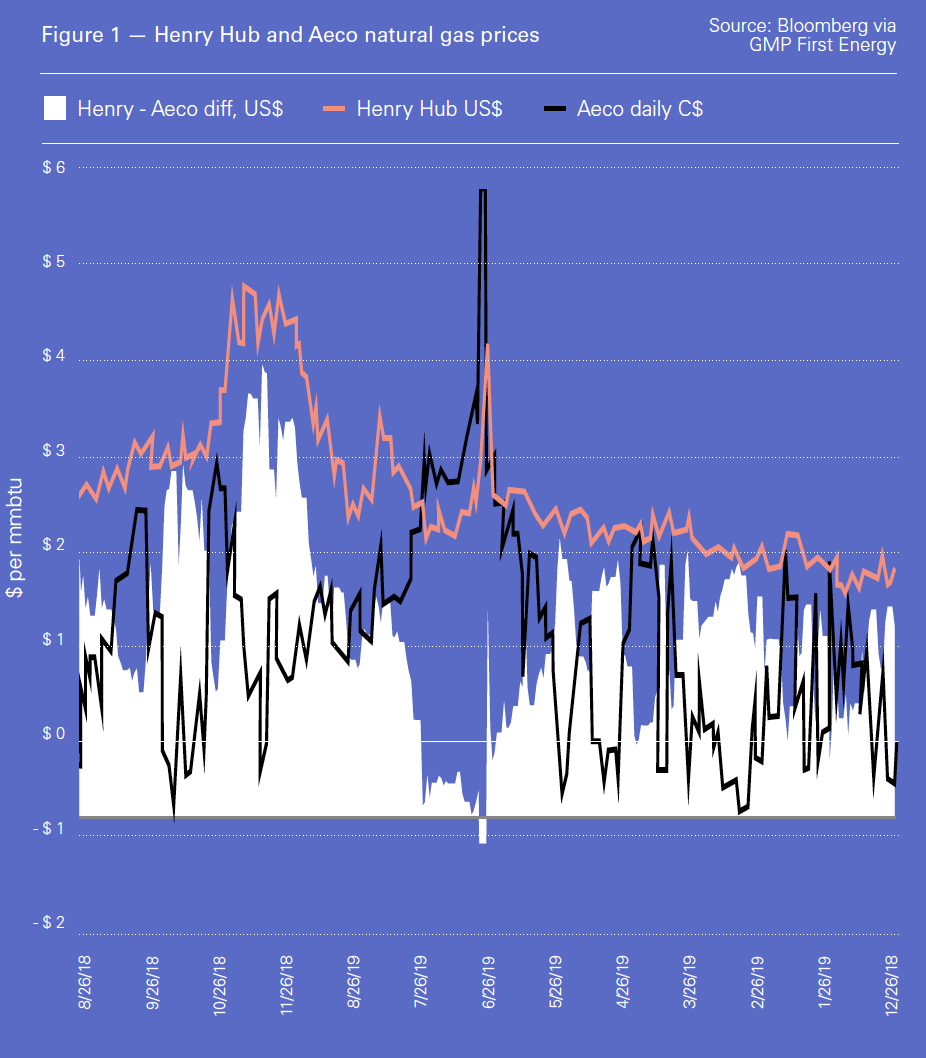 Like most producers, Pine Cliff is doing what it can to mitigate the impact of the weak Aeco pricing – moving sales points elsewhere, cutting costs in the field and at headquarters. Those moves resulted in a 2Q realised natural gas price of C$1.69/’000 ft3, 43% higher than the Aeco average, but despite beating the market on price, Pine Cliff still registered negative cash flow in the second quarter for just the third time in the last 29 quarters and a 2Q loss of nearly C$25mn.

Peyto Exploration & Development also cut production in the second quarter, to an average of 422mn ft3/day from 494mn ft³/day in the comparable period a year ago. It also chose to produce more liquids-rich gas and less dry gas to take advantage of the stronger prices available for NGLs and condensate.

Peyto has also diversified its marketing efforts for the gas it produces: up until January 2018 it sold virtually all of its output at Aeco, on either the monthly (85%) or the daily (15%) index, Peyto CEO Darren Gee explained in his August 2019 report. “It was a simple marketing strategy but worked very well and with it we generally beat the daily Aeco price.”

Not your father’s gas business

The gas world today, however, is very different from the gas world 20 years ago, when Peyto was established, Gee said. Back then, consumers – mostly from the US – came to Alberta’s door “asking for all that we could deliver.”

“Now, we are in a supply driven market and the US, our biggest customer, has become self-sufficient, even a net exporter, so now we must compete against them for the same markets.”

For now, the only market available to Canadian producers is the North American market, although producers are hopeful that by the middle of the next decade they’ll be able to reach Asian or European LNG markets.

Instead of selling only to the Aeco market, Peyto is now targeting four key markets in North America, which when Mexico is included represents a demand pull of more than 100bn ft3/day.

Gas producers lucky enough to have a strong position in the liquids-rich Montney basin – like Birchcliff Energy – emerged from the second quarter bolstered by the ability to sell condensate and natural gas liquids at prevailing crude prices or better. As such, they remained relatively immune to the Aeco pricing challenges.

“We had strong results in the second quarter, which were underpinned by the strong performance of our assets and our new oil and liquids-rich wells, the successful execution of our capital program, our record low operating costs and our natural gas market diversification initiatives,” Birchcliff CEO Jeff Tonken wrote in his 2Q 2019 report.

Market diversification, he stressed, was key: because 41% of its gas production was sold at the Dawn trading hub and in US Midwest markets served by the Alliance pipeline, which carries gas – with valuable liquids still in the gas stream – its average realised sales price in the second quarter was a robust C$3.15/’000 ft3, a 184% premium to the C$1.11/’000 ft3 it realised on its sales at Aeco.

“Birchcliff continues to be strategic and opportunistic in advancing its market access initiatives,” the company said. “[We] actively monitor market conditions and execute a marketing strategy that diversifies [our] sales portfolio to ensure that production gets to market at optimal pricing.”

Another producer with strong ties to the 1.6bn ft3/day Alliance system and the lucrative Aux Sable liquids markets in the Chicago region is Seven Generations Energy, known colloquially as 7Gen.

About three quarters of 7Gen’s nearly 500mn ft3/day of natural gas production is sold into the US, mostly via the Alliance system, but it also moves some gas further south into the Gulf Coast market, where demand is high from a growing network of LNG export facilities. With exposure to Chicago City Gate and Henry Hub pricing, 7Gen realised an average natural gas price of C$3.29/’000 ft3 in the second quarter this year and C$3.80/’000 ft3 in the first half, compared with C$3.79 and C$3.73, respectively, in 2018.

The rest of 7Gen’s natural gas production is marketed either at the Dawn hub in southern Ontario (about 15% in 2019) or at Aeco (about 10% in 2019), but later this year it will also tap the Malin hub in southern Oregon via TC Energy’s 2.9bn ft3/day Gas Transmission Northwest (GTN) system.

The second quarter this year was marked by a provincial election in Alberta which saw Rachel Notley’s socialist New Democrat Party (NDP) lose control of the government to Jason Kenney’s United Conservative Party (UCP). Kenney and the UCP, which emerged from the ashes of the old Progressive Conservative Party that had ruled in Alberta for decades up until the NDP grabbed the reins in 2015, is far more industry-friendly than the NDP, and it acted quickly to put mechanisms in place to aid the ailing gas industry, appointing Dale Nally as associate minister for natural gas soon after the April election.

Nally and his bureaucrats have been working closely with industry ever since, Pine Cliff’s Hodge noted, and they are fully aware of the importance of a strong natural gas industry to the province’s future.

“I believe that the current government understands that the health of the Alberta natural gas industry is important, not just to participate in the impending growth of LNG, continued oil sands expansion and the coal-to-gas shift in power demand on the horizon, but also for provincial revenues,” he wrote in his second quarter report to shareholders.

Notley’s NDP administration took some steps to encourage higher natural gas consumption within the province’s borders by implementing incentive programs to attract new petrochemical developments, including a new methanol production facility that will consume 300mn ft3/day of Alberta gas. And it moved to encourage the province’s electric utilities to switch to gas-fired generation from coal by early in the next decade.

But if salvation is to come for western Canada’s gas producers, it’s going to have to come from combined efforts by the government and the industry to provide price relief at Aeco, to boost consumption at home and to reach new markets abroad.

Nally succeeded on the first count in late August, when he brokered a temporary fix that will make it easier for producers to move gas into storage during the summer, when maintenance work on the NGTL system reduces capacity. That should help remove the Aeco price volatility that plagues producers every summer.

On the second count, Rocky Mountain GTL started construction in May on its Enhanced GTL® facility southeast of Calgary that transforms low-value and underutilised resources such as stranded gas, flare gas and produced natural gas into cleaner-burning synthetic diesel or other premium liquid fuels.

The company’s first facility will consume 5mn ft3/day of natural gas and natural gas liquids into 500 b/day of paraffinic synthetic diesel and naphtha, but the technology is scalable to as much as 50mn ft3/day of capacity.

“Rocky Mountain GTL will eliminate price or pipeline accessibility issues for producers by providing optionality to produce natural gas (stranded or otherwise) and associated liquids by converting this resource to synthetic diesel,” CEO James Ross said. “The unconventional oil and gas boom and global anti-flaring initiatives have created an unprecedented opportunity for Rocky Mountain and its partners to be world leaders in the conversion of natural gas to high performance, zero sulphur, low emission and low Carbon Index synthetic liquid fuels.”

Bill Gwozd, founding director of the Calgary-based Centre for Gas and Liquids Monetization, said it is these new market ideas that could be critical to the salvation of the western Canadian natural gas industry. Rather than watching the industry spiral downwards, he said Rocky Mountain GTL appears to be part of a small group that are making things happen.

“What I like about [this project] is the small size with an option to scale if successful,” Gwozd told NGW. “Taking low-cost gas natural gas and converting it to high-priced diesel is the economic engine driving this opportunity. Plus, I like that this process prefers dry gas thus helping to consume a product that [western Canada] is long in.”

All producers were encouraged in October 2018 when the Anglo-Dutch Shell-led LNG Canada consortium took a final investment decision on its 14mn mt/yr LNG export facility at Kitimat, on BC’s northern coast. But that project will do little to move the needle on prices for producers – virtually all of the 1.7bn ft3/day of gas that the first two trains will consume will come from northeastern BC reserves owned by LNG Canada’s equity partners.

And the much smaller Woodfibre LNG project in Squamish, north of Vancouver, will consume a relatively modest 300mn ft3/day of gas, drawing on the local gas grid operated by FortisBC for its supplies.

The Chevron/Woodside Kitimat LNG project, at Bish Cove not far from the LNG Canada project, is a possible outlet, although again, most of the gas is likely to come from reserves owned by Chevron and Australia’s Woodside in the Liard Basin, in the far northeastern corner of BC.

That leaves two east coast projects – Pieridae Energy’s Goldboro LNG project and LNG Limited’s Bear Head LNG proposal – as the only shovel-ready projects that might draw gas from western Canada. Neither, however, has reached a final investment decision, and both would require complicated pipeline connections to get their gas from western Canada to Nova Scotia.

With the impact of third-party LNG export projects on western Canadian gas prices still uncertain, the industry itself has taken on the task of developing a home-grown liquefaction and LNG export facility: Rockies LNG Partners is a consortium of a handful of natural gas producers – Peyto, Seven Generations Energy and Birchcliff Energy among them – looking to attract partners to build and operate a 12mn mt/yr LNG project that would be in operation by 2026. That suggests a final investment decision must be taken by the end of 2021.

“Now that the US is no longer our major customer and gas is backing up into AECO and lowering the price there, we need to create new routes to market, and west coast LNG, because of its proximity to Asian markets, is the route we want to look at,” Rockies LNG CEO Greg Kist – who was president of the Petronas-led Pacific NorthWest LNG project for a time before it was abandoned in 2017 – told NGW.

Rockies LNG would like to leverage existing plans which might have fallen by the wayside – perhaps Enbridge’s Westcoast Connector pipeline that would have supplied BG Group’s Ridley Island LNG facility (dropped by Anglo-Dutch major Shell when it acquired BG) or TC Energy’s Prince Rupert Gas Transmission pipeline, which would have supplied the Pacific Northwest LNG at Lelu Island, near Prince Rupert – to help advance a producer-focused floating liquefaction and export project.

“We want to participate directly, as producers, in the LNG market, we want to learn from what others have done, and we think there are opportunities to take advantage of what has already been done,” Kist said.