Announcing first half 2016 results August 16, Cairn CEO Simon Thomson said that “successful appraisal of the world-class SNE discovery in Senegal has significantly increased 2C oil resources to 473mn bbls, with associated 2C oil in place in excess of 2.7bn b.”

Having drilled six wells in two years, the joint venture is planning third phase drilling starting 4Q 2016/1Q 2017 with further evaluation of its SNE discovery – targeting a final investment decision (FID) in 2019 that will be based on a break-even price of less than $35/b.

Thomson told analysts that Cairn “supports Woodside coming into the [Senegal] venture”, as it was “fully aligned” with Cairn’s outlook on Atlantic margin prospecting. The Australian company announced July 14 it would pay ConocoPhillips $350mn for its 35% stake in three offshore Senegal licences operated by Cairn. Analysts said that was low, signalling limited interest in the asset, but Thomson disagreed. He said that others remained interested in the asset, but that Cairn was in no rush to sell down its 40% stake. Other Senegal partners are Australia’s FAR 15% and state Petrosen 10%.

Richard Heaton, exploration director, said there was a gas cap above the SNE field; in May, Cairn had said its sixth well, SNE-4, yielded “multiple samples of gas, oil and water recovered to the surface”.

Asked on the analysts call how much of the expected development plan would take gas into account, he said that initially gas would be reinjected to help the field’s oil recovery, but that later on Cairn would need to look at the gas resource – “but that is for later in the plan.” 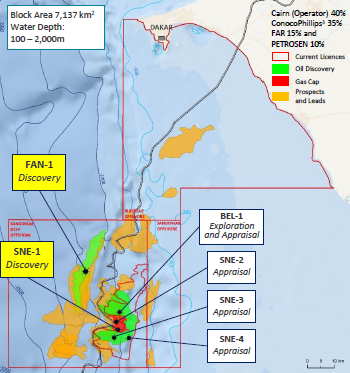 On where to drill later this year, Heaton said the nearby Sirius exploration prospect was “low risk” with similar gross oil and gas bearing zones, and with a high chance of tie-in to the SNE field.

Paul Mayland, chief operating officer, said Cairn expects to submit an exploitation plan in 2018 and take FID in 2019, based on which it is targeting first oil in 2021-23 using a floating production ship (FPSO) and eying gross plateau production of 100-120,000 b/d.

Cairn’s 1H2016 net loss after tax was $38mn, in which its share of North Sea development and Senegal drilling costs were a factor, although this was less than its $230mn loss of January-June 2015; it booked a charge for unsuccessful exploration offshore Mauritania of $32mn.

The UK firm said it expects its two non-operated UK oil developments, Kraken (29.5% Cairn equity) and Catcher (20%), both to be cashflow positive by end-2017. Sailaway on the Kraken production ship is due 4Q 2016 with first oil in 1H 2017, while first oil is due also on Catcher in the second half of next year. It envisages Catcher and Kraken plateau production costs of $20/b and $14/b respectively. Asked if it might be inclined to increase its stake in Kraken, given a willing seller, Thomson said that Cairn was “comfortable” with its current level of exposure.

Meanwhile Cairn is taking India to arbitration in The Hague over seizure of Cairn India shares, demanding $1.1bn plus costs – and if a tax demand remains in place on top of that, a total of $5.6bn plus costs. It expects India to respond in 4Q 2016 with hearings during 2017.