Turkey is no stranger to extreme turns of events, but news that officials from Gazprom’s former local marketing arm Bosphorus Gaz had been arrested for "spying" did raise eyebrows, especially as media reports suggested they had been accessing confidential state data on gas import volumes and prices.

Reports by Turkey's fiercely pro-government daily Sabah October 21 claimed that a combined operation by Istanbul police and state security body MIT had revealed Turkish officials passing the data to Bosphorus Gaz, which had then passed it to an unnamed company described only as "a foreign energy giant".

Bosphorus' deputy CEO was reported to be one of those detained, along with five others who all now face charges, while the CEO of Bosphorus was reported to have "fled the country".

The story was picked up and repeated by most of Turkey's private media, but noticeably not by Turkey's powerful state media, while neither Turkish nor Russian officials have made any comment.

Although superficially resembling a plot from a spy thriller, the reality is less dramatic, being rather the latest chapter in a long game of cat-and-mouse which has seen Ankara and Moscow manoeuvring for advantage on a whole slate of issues.

But for Turkey’s president, Tayyip Erdogan, under strong electoral pressure to keep domestic energy prices down, it is a chapter of no little importance.

At the same time Gazprom increased its stake in Bosphorus to 71% and took stakes in two other private importers, Enerco and Avrasya, on the back of plans to hold stakes in the whole Turkish value chain.

However as subsequent election concerns saw Ankara take a more pro-active role in tariff regulation, coupled with worsening relations, Gazprom changed strategy, selling its stakes in the two other importers in 2017, but retaining its stake in Bosphorus.

But the following year saw further changes to the Turkish market. Over-capacity in the Turkish power sector coupled with the double whammy of a lira in free-fall and gas prices rising on the back of rising crude prices, conspired to price Turkey's gas-fired plants out of the Turkish power market.

Gas imports fell 8.85% over the year to 50.36bn m³, with the Russian imports taking the lions’ share of the losses.

As a result, most of the seven were rumoured to be in breach of monthly and annual take-or-pay commitments.

Few in Turkey were surprised when in October 2018 Gazprom sold its stake in Bosphorus to its partner Sen Group, reducing its direct exposure to the changing Turkish market.

The market continued to decline in 2019, as total imports fell 10.5% year on year, with Russian imports down by 35.7%, as the disparity between falls in Botas' Russian volumes – down 16.7% while private importers’ volumes were down 88% – continued. Over 2019, imports of Russian gas by the seven private importers comprised only 7.4% of contracted volumes.

While 2020 saw some relief with overall gas imports up 2.3% over the first 10 months (the latest data available) and private Russian imports were up 166% year on year, this sharp rise still saw private imports at only 33% of contracted volumes and came at the expense of Botas' imports, down 26.7% over the same period in 2019.

While imports from Turkey's other pipeline suppliers Azerbaijan and Iran remained steady, Botas had also been boosting its imports of cheap spot LNG, volumes of which rose by 45.7% over 2017-9.

With the sharp fall in Russian volumes apparent from monthly data reports from Turkish energy regulator (EPDK), and neither Ankara nor Moscow commenting, the widely held assumption was that this was in return for Turkey completing the two strings of Gazprom's 31.5bn m³/yr TurkStream pipeline through Turkey.
In return for completing TurkStream, which Russian president Vladimir Putin wanted completed, Gazprom appears to have desisted from taking action on take-or-pay.

However in early 2020 Turkey's deputy energy minister Alparslan Bayraktar confirmed that Ankara was using the availability of cheap spot LNG to leverage all Turkey's long-term gas suppliers to lower their prices and relax contract conditions.

But with only Russian volumes falling until that point, Ankara's immediate target appeared to be the Russian contracts for 16bn m³/yr ending 2025 and more urgently for 8bn m³/yr expiring 2021-22.

Split between Botas (4bn m³/yr) and four private suppliers (4bn m³/yr, of which Bosphorus holds 0.75bn m³/yr), the 8bn m³/yr have since the start of last year been delivered via TurkStream, along with 6bn m³/yr supplied under four other longer term contracts.

With nothing said officially by either side, rumours have circulated that Gazprom wants Botas to take responsibility for those private contracts in breach of take-or-pay, and to negotiate a portmanteau settlement.

However with Botas thought to be able to meet most of the demand in north west Turkey from other parts of its grid, and Gazprom unlikely to want the Turkish string of its new pipeline operating at low capacity, it is unclear whether the Russian supplier holds much leverage.

At the start of last year, one string of TurkStream began supplying Turkey in place of the existing TransBalkan pipeline, with the other transiting gas through Turkey to Bulgaria and on to southeast Europe.

With the export string of Turkstream using a new border crossing with Bulgaria, the existing Strandzha/Malkoclar crossing point and the Botas transit line as far as its Luleburgaz intersection were left unused.

From December 2019, energy regulator EPDK began offering spot import capacity for Malkoclar, while Botas in June 2020 opened a tender to convert the Luleburgaz-Malkoclar line and crossing point to bi-directional flow.

Once realised, that change would allow Botas to export gas from its system to buyers in Bulgaria and southeast Europe, in competition with Gazprom.

With no indication when the conversion will be completed EPDK has continued with its quarterly and monthly capacity auctions with interesting results. 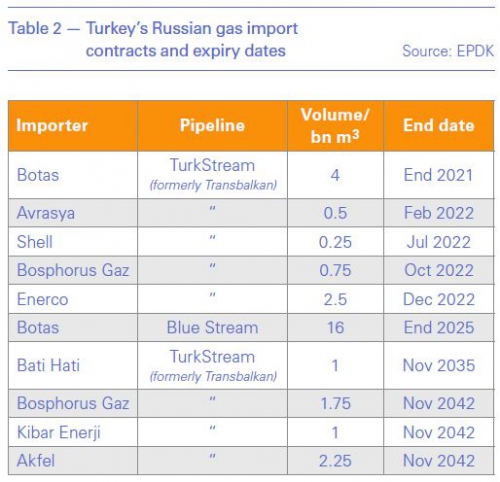 No applications were made until Bosphorus successfully applied for capacity to import 390,000 m³/d during September, in what appeared to be a bilateral deal.

As Bosphorus had apparently failed to meet its existing take-or-pay commitments with Gazprom, and so had no reason to make spot imports, the sale was widely read as a signal that Gazprom was prepared to send its own gas through Strandzha/Malkoclar, in competition with its own exports, to limit options for gas moving from Turkey to southeast Europe.

It is unclear whether there is any connection between this unusual move by Bosphorus and the arrests a month later, but the timing raises that possibility.

What happens now is equally unclear. However, with 8bn m³/yr of Russian contracts expiring over the next 18 months, 16bn m³ by 2025 and importers for the remaining 6bn m³/yr believed also to be in breach of contracts, direct talks between Ankara and Moscow seem certain.

Turkey, despite having recently discovered gas reserves of its own, still needs substantial imports, and with support for Erdogan falling, he needs cheap gas under flexible contracts which will enable him to keep gas and power prices down ahead of elections in 2023.

Moscow views Erdogan as a useful ally, willing to stand against Turkey's traditional allies, the US and the European Union (EU). So a deal that keeps Erdogan in power could ensure Gazprom continues to enjoy a guaranteed Turkish market and retain unfettered access to southeast Europe.

However the Turkish president also increasingly relies on domestic support from right-wing Turkish nationalists outside his own Islamist party. Suspicious of Moscow they support stronger ties with Turkey's Turkic cousins in Azerbaijan and central Asia.

Azerbaijan last month began exporting gas to southeast Europe and Italy through the Southern Gas Corridor in competition with Gazprom, and the January ground-breaking rapprochement with Turkmenistan has renewed hopes that exports of gas from Turkmenistan's vast gas reserves could finally be transited via Azerbaijan and Turkey to Europe, 20 years after previous plans stalled.

The TransAnatolian and TransAdriatic pipelines carrying Azeri gas operate at half capacity and the prospect of using both to transit Turkmen gas as competition for Russian gas will appeal to Turkey's nationalists, not to say also to the EU and the US – who have long looked to Turkmenistan as a possible supplier for Europe to compete with Russia.

Against this Erdogan may find that he is limited in just what he can offer Moscow in return for cheap gas. The negotiations are likely to be protracted.