The twin reconciliations between Israel and Turkey and between Turkey and Russia are expected to raise expectations for new initiatives in the natural gas sector and with them new gas deals. A gas deal with Turkey would be the best outcome for gas producers operating in Israel.

However, Russian involvement in the latest reconciliation between Israel and Turkey might hinder those prospects.

Three weeks ago Israel's prime minister Benjamin Netanyahu visited Russia's president Vladimir Putin in Moscow for talks, in which energy and diplomacy were fused. At a press conference, Putin said that Russia viewed a normalization of Israel-Turkey relations as positive. 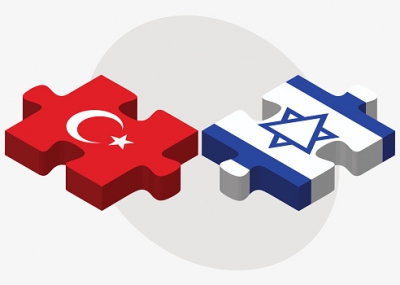 "I see no influence of Russia on the Israel-Turkey deal, other than a possible indirect impact of Ankara feeling more comfortable about being bolder with Jerusalem because tensions with Moscow receded, and vice-versa," Matthew Bryza, a Turcas Petrol board member and former US ambassador to Azerbaijan, told NGE in an email. "Encouragement from the US, on the other hand, appears to have played a significant and positive role in the Turkey-Israel agreement.

Bryza has a considerable track record in energy negotiations in the region and now he envisages protracted negotiations between Leviathan Partnership and the Turkish consortium of energy companies. "Negotiations on Israel-gas-to-Turkey have been standing still for quite some time, due to both the uncertainties regarding Israel's regulatory structure and the impasse in Turkey-Israel diplomatic relations, though contacts were maintained," wrote Bryza. "With the normalization agreement between Israel and Turkey, these contacts can now be re-energized."

A gas sales/purchase agreement would be an important milestone, he wrote, though reaching it will require resumption of intensive talks on a gas pricing model. Bryza couldn’t predict how much time might be needed to reach the commercial and international legal agreements required for such a project to move forward. There must be, he wrote, separate negotiations on the Cyprus Question, which will also have a certain degree of influence on the Israel-Turkey gas project. "Such a subsea pipeline would need to pass through the Exclusive Economic Zone and across the Continental Shelf of Cyprus," he wrote.

As for the pricing model it will not be linked to oil prices, but rather, based on a formula derived from pricing at a major natural gas trading hub, such as the UK's NBP, and then adjusted to local market conditions. "There will be no target price; rather, the market will determine the price," wrote Bryza.

In order to export gas from Leviathan to Turkey, private investors will have to finance a 500-km subsea pipeline in deep waters. "The pipeline should/will be financed by private investors (theoretically with some potential participation by a state-owned company) on the basis of project finance," Bryza wrote.