This was largest increase since 2010 when gas demand bounced back from the global financial crisis and it follows a 3% increase in 2017. The US and China accounted for about 70% of this growth.

But even though gas helped reduce air pollution by substituting coal in power generation – a sector that accounted for over a fifth of the rise in gas demand – CO2 emissions still rose 1.7% last year.

This was the subject of the International Energy Agency’s (IEA) latest report ‘Gas 2019’, covering the period 2018 to 2024 and presented June 4.

The benefits of gas in 2018 were numerous and widespread, playing a central role during the energy transition:

Gas also faces its own challenges:

As IEA executive director Fatih Birol wrote in the introduction: “Natural gas is at the heart of three core areas for the IEA: energy security, clean energy and opening to emerging economies..”

IEA called 2018 “another golden year for natural gas,” with global demand increasing by 4.6% and projecting that it will continue doing so to 2024 (Figure 1), albeit at a slightly lower rate than in the previous two six-year periods. 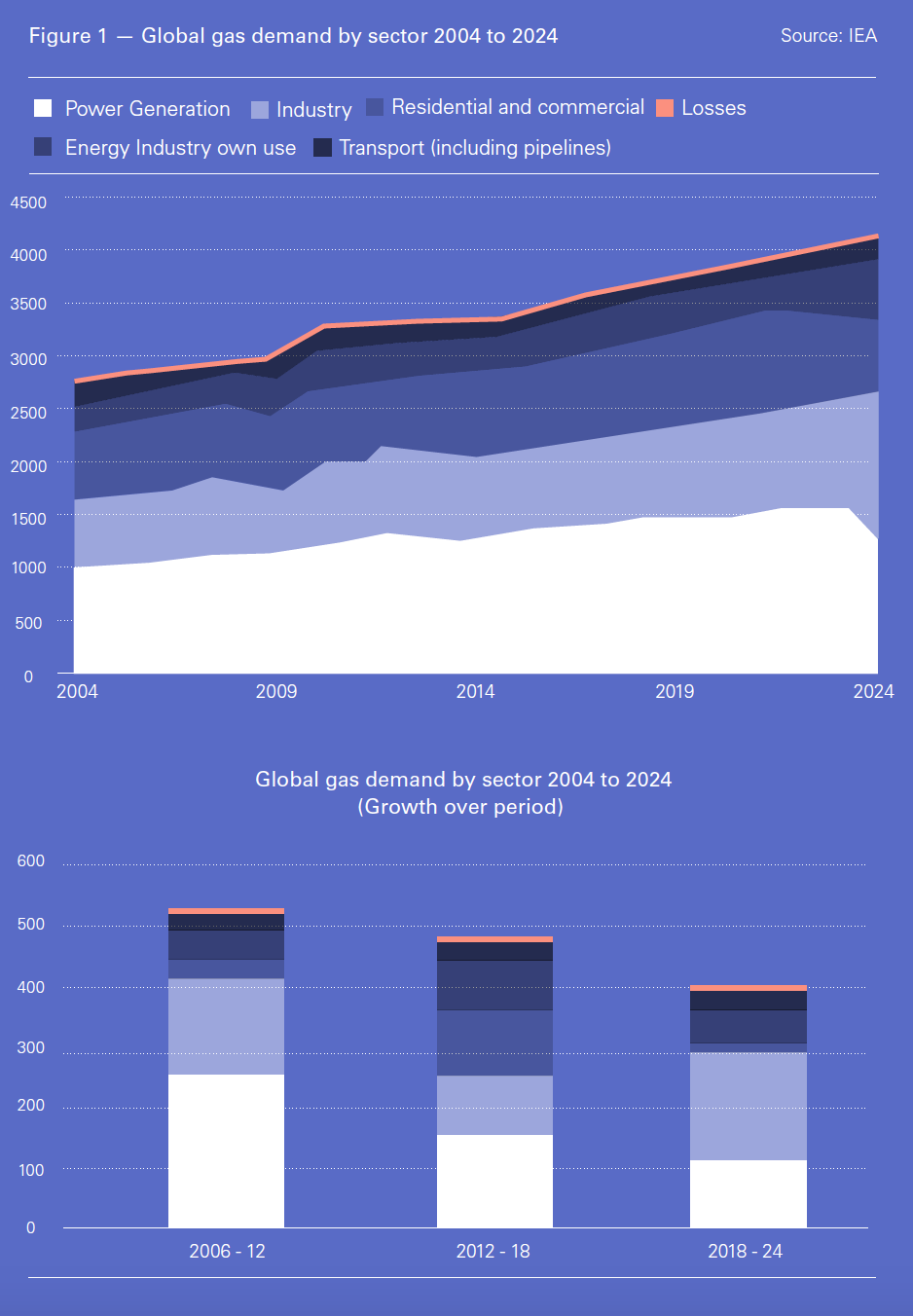 The IEA forecasts that by 2024 global gas demand will exceed 4.3 trillion m³, compared with 3.9 trillion m³ in 2018. Industry, accounting for 44% of this increase, will be the main driver.

Power generation provides the largest contribution to global gas demand, achieving 40% in 2018, and it is expected to remain stable at 39% by 2024. However, with strong competition from renewables and coal, the power sector’s contribution between 2018 and 2024 will be about 30% of the total growth in gas demand, lower than during the previous two six-year periods.

Despite the growing interest in LNG as a maritime fuel, the share of global gas demand by the transport sector will remain rather limited, as will  global gas demand growth in the residential and commercial sectors.

In 2018 gas accounted for 45% of global increase in primary energy consumption, with the US and China being the two main contributors – accounting for 70% of the total - mainly due to a combination of economic growth, coal displacement and weather-related energy needs.

The US was the single largest driver of higher demand, with a gain of 80 bn m³, up 10.5% from 2017 – and its highest increase since the early 1950s. Remarkably, to put it in context, this higher demand is the same as the UK’s production. Its consumption figure includes energy sector own use, such as gas used as fuel in liquefaction plants; but not the exported LNG itself which is consumed in importing countries.

Asia is where most of the future growth in gas demand is expected to take place, driven by China (Figure 2), so long as gas remains competitive. However, prolongation of trade wars – but also sanctions – might impact this in the longer term. There are already signs that some countries, led by China, are placing emphasis on domestically produced energy and reducing imports. 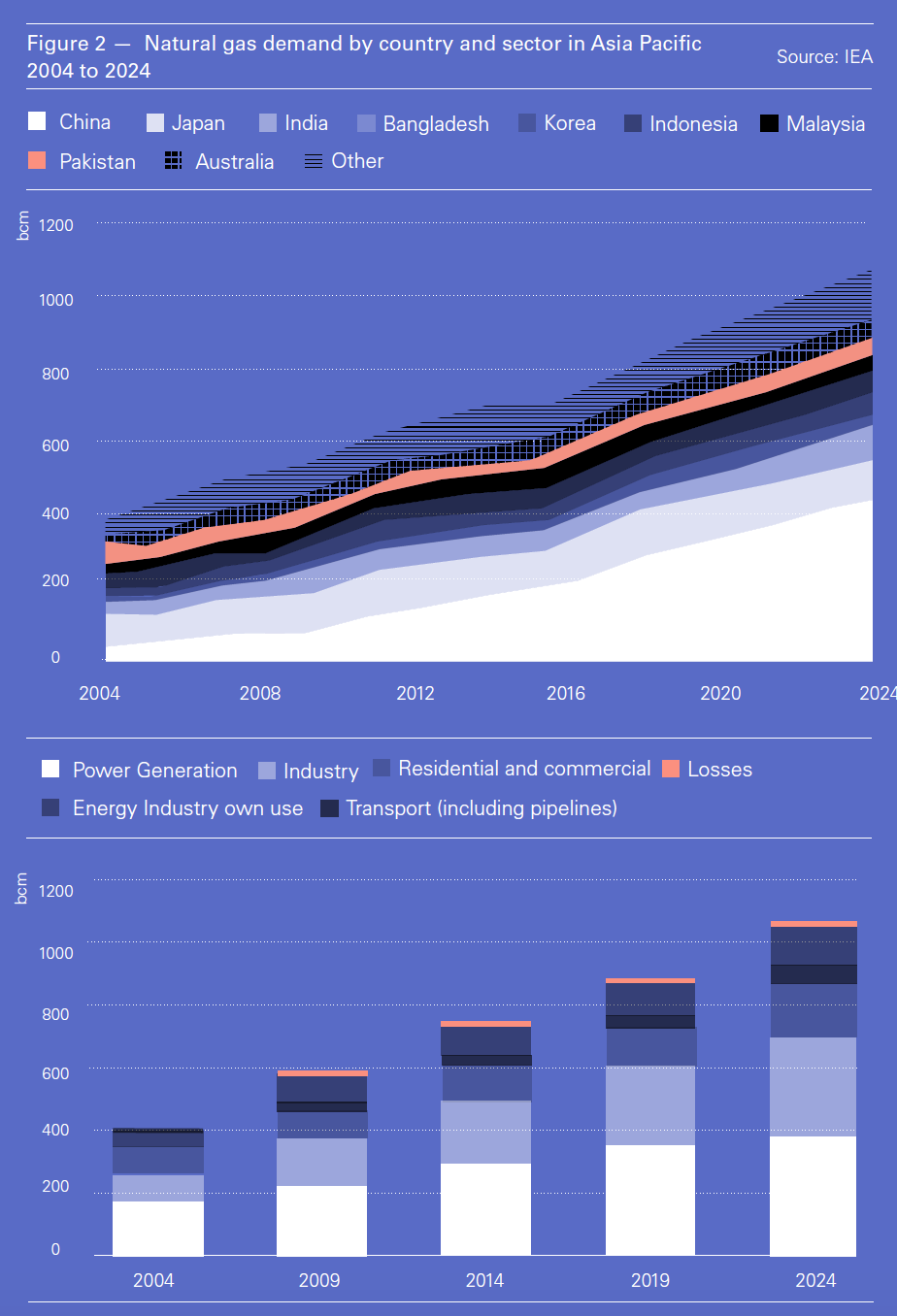 China is expected to account for more than 40% of global gas demand growth to 2024, driven by the government’s goal to improve air quality, assuming that lower economic growth and the continuation of trade wars do not deflect it from this path.

China’s demand growth is expected to average 8%/yr, substantially less than the 18% increase experienced in 2018, but nevertheless still quite high. By 2024 the country is expected to use 166bn m³ more gas than it did in 2018.

The Asia Pacific region will account for about 57% of total growth in natural gas consumption until 2024, with an average annual growth rate of 4.5% (Figure 2), driven mostly by industry and power generation.

With the return of nuclear power and development of renewables, Japan’s gas demand is expected to decline, while demand in South Korea will remain largely flat.

After two years of growth, Europe experienced a small decline in natural gas demand in 2018. However, future gas demand in Europe is expected to remain flat (Figure 3), mostly as a result of the increasing penetration of renewables in power generation – averaging close to 540bn m³/yr.

After several years of decline, gas demand in Russia rose for the third consecutive year, driven mainly by power generation. Over the long-term, IEA’s projections suggest that Russia is well placed to remain the primary source of gas into Europe, in addition to a growth in LNG imports.

The US led global gas production in 2018 and will continue doing so over the reference period to 2024, by which time its annual production will exceed 1 trillion m³ (Figure 4), driven by shale resources.

Natural gas production will also increase substantially in Asia Pacific, led by China (Figure 5), but mostly to feed domestic demand. The exception is Australia which will continue being one of the largest gas exporters in the world. 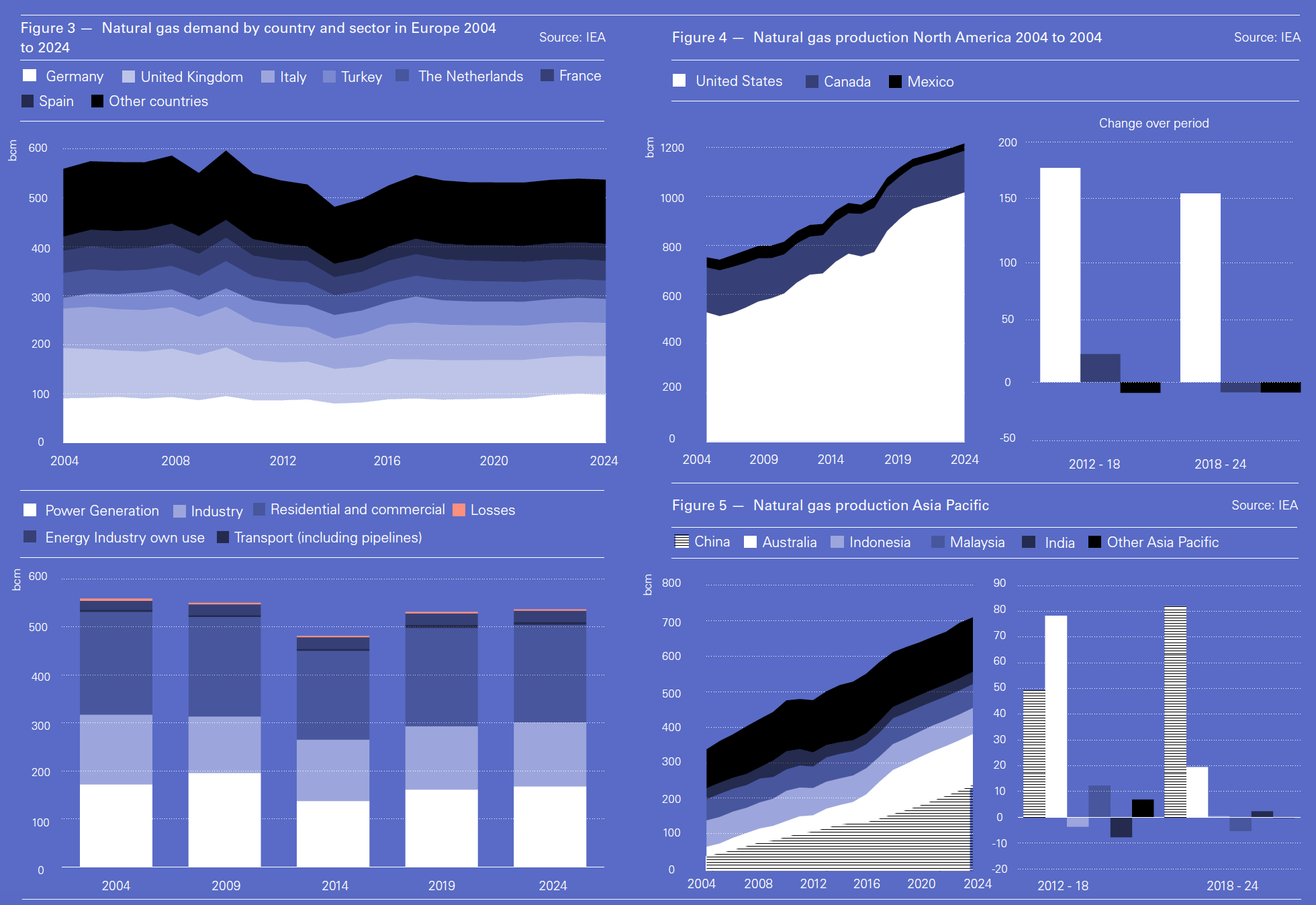 Russian gas production will continue to expand – but at a slower rate in comparison to the previous six years – increasing by about 45bn m³ between 2018 and 2024 (Figure 6). But the major upstream development plans envisaged by Novatek to produce – eventually – 70mn mt/yr of LNG from the far north, and 13mn mt/yr from Baltic LNG early next decade – are excluded from IEA’s forecasts until the final investment decisions have been taken. 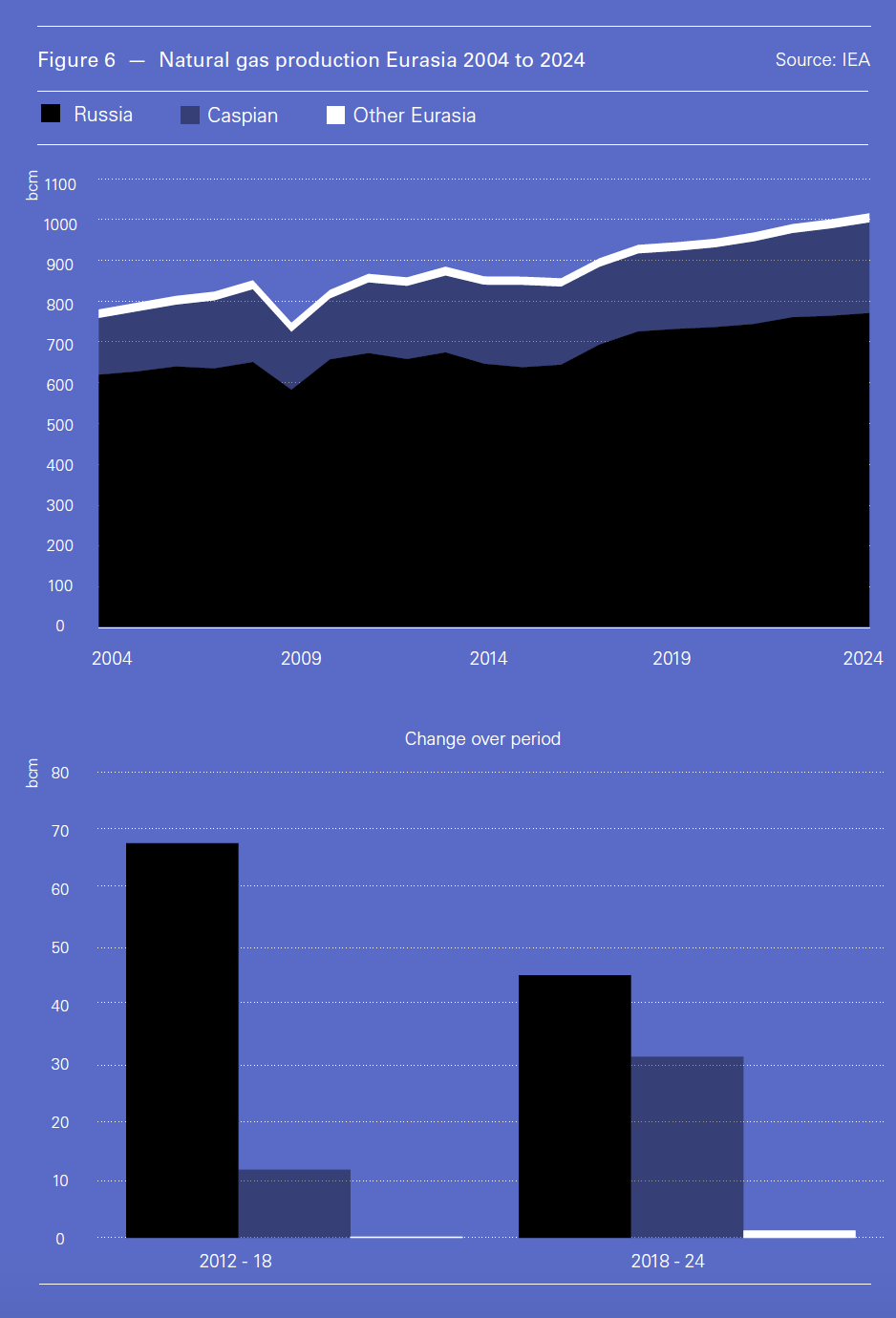 With the demise of Groningen, indigenous gas production in Europe will continue declining, by about 45bn m³ between 2018 and 2024 (Figure 7), meaning more imports will be needed.

The main driver of the expansion in global natural gas trade will be LNG, reaching 546bn m³ of pipeline gas equivalent by 2024 from 432bn m³ in 2018. The single biggest contributor to global gas trade growth will be US LNG, reaching 113bn m³ by 2024 (Figure 8).

With its domestic gas production unable to keep up with increasing demand, China is expected to become the largest LNG importer in the world, ahead of Japan, requiring 109bn m³ by 2024 (Figure 9).

With Gazprom’s 38bn m³/yr Power of Siberia gas pipeline coming on stream by the end of 2019, Chinese pipeline gas imports are expected to double to 100bn m³/yr by 2024.

But other emerging Asian markets are also expected to drive LNG trade growth, with LNG imports in the region expected to almost double from 81bn m³/yr to 155bn m³/yr between 2018 and 2024.

European natural gas imports increased in 2018 as indigenous production fell. Gazprom captured most of this, with pipeline export sales breaking another record in 2018, increasing by 3.8%, going above the 200bn m³ mark for the first time, albeit in Russian cubic metres which are slightly less energy rich than the norm.

An increase in global LNG supply capacity, lower than expected Asian demand, and erosion of the Asian premium have been triggering higher LNG import flows to Europe since last October. This pressured TTF hub prices down to less than $3.50/mn Btu in early June.

But once LNG prices increase, this trend may slow down. Europe’s increasing gas import needs are expected to be bridged by a combination of LNG and pipeline imports from both traditional and new sources.

However, the IEA forecasts that LNG is “expected to play an increasingly important role in Europe’s natural gas supply portfolio, growing at a rate of 4%/yr through the forecast period from 66bn m³ in 2018 to 86bn m³ by 2024.”

With global markets, especially in Asia and Europe becoming well-supplied, gas prices are converging. The expansion of the LNG trade is likely to encourage even greater price convergence and low prices. 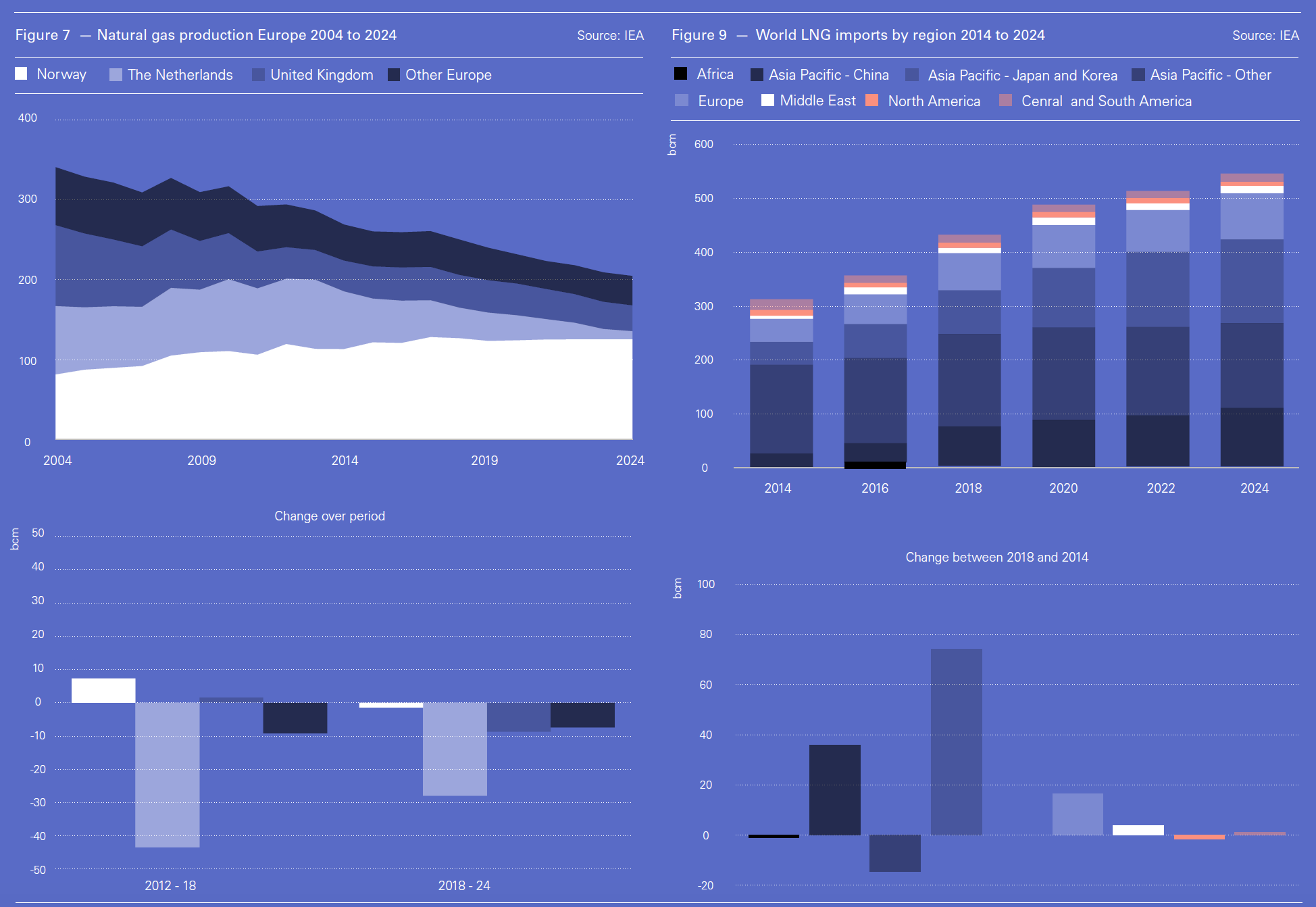 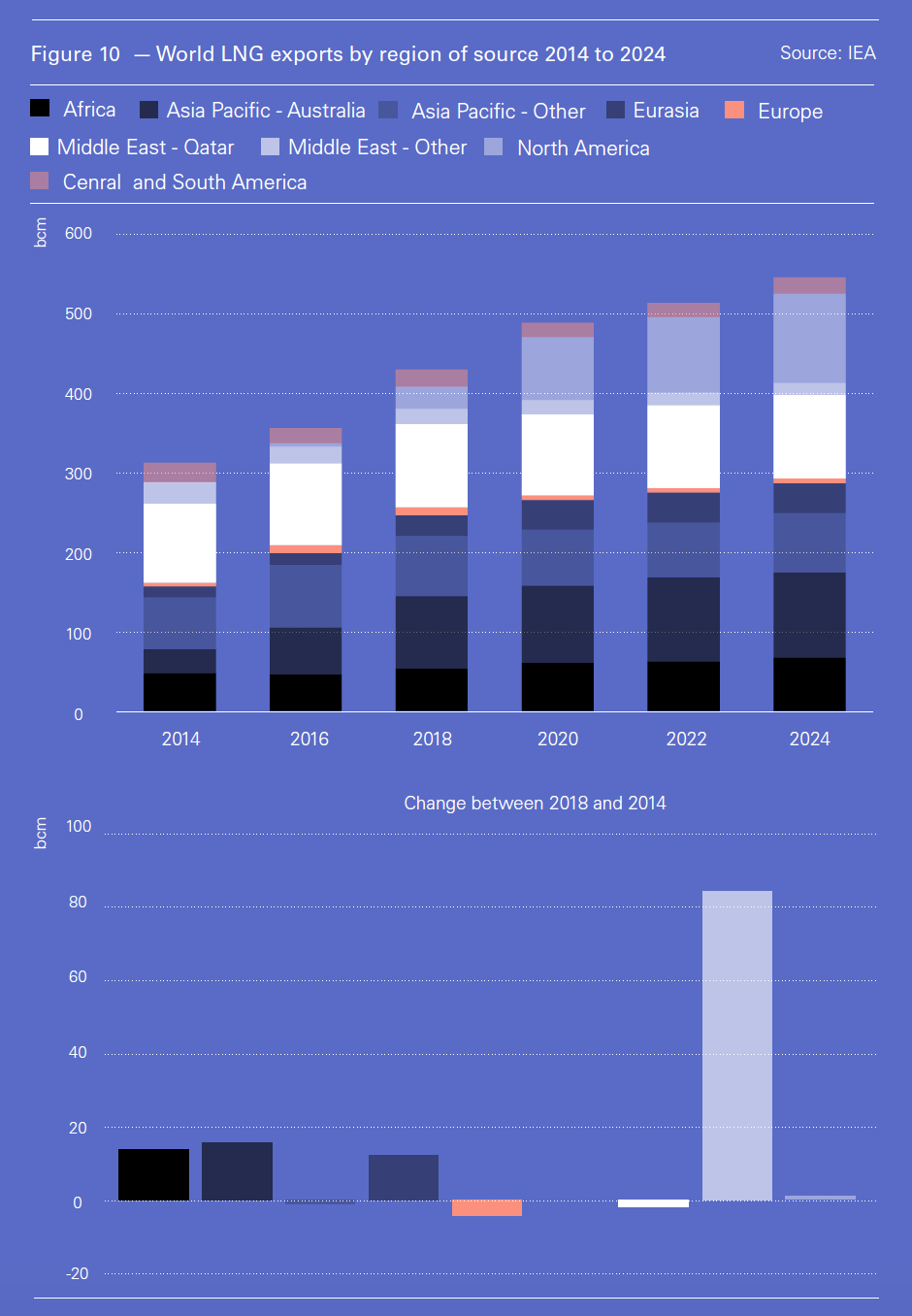 The IEA states that China is the single largest contributor to LNG import development, accounting for almost one-third of total growth, becoming the world’s largest LNG importer by the end of the forecast period. However, with the likelihood of the trade war between the US and China having longer-lasting effects, and with security of energy supplies playing an increasing role in China’s fast-evolving energy policies, the emphasis may be on prioritising domestic energy production at the expense of imports. This may impact future growth in LNG imports.

According to BP’s World Energy Outlook, the world will need more energy but has to do so with lower emissions, making balancing energy demand and climate a challenge. Despite the rapid increase in renewables, low-carbon energy is not keeping up with this energy demand growth. Gas appears to have stepped in to provide this additional energy, in part displacing coal and thus reducing emissions during these early stages of energy transition.

But in the longer term, certainly by 2030, it also needs to decarbonise in order to continue retaining a major role in providing the energy the world will need.

As Birol said “Natural gas can be part of the solution to a cleaner energy path, both on land and at sea as an alternative marine fuel, but it [needs to] ensure price competitiveness.”