Brazilian President Jair Bolsonaro signed a new gas bill into law on April 9, following a decade of intense debate between the government and the gas industry over the legislation. The law is expected to cut through regulatory obstacles to development, attract new players and investment into the sector, spur competition and lead to lower gas prices in Latin America’s largest country. 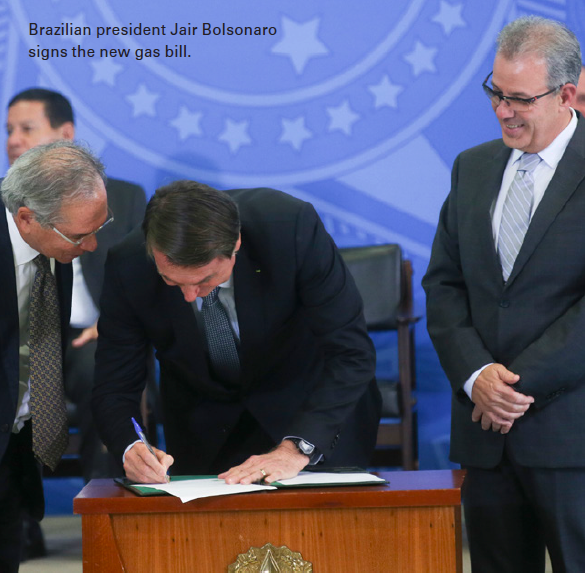 According to Brazilian think tank Energy Research Office (EPE), the new regulatory framework might generate $8-10bn in investments in the industry and lead to a growth in gas production to 147mn m3/day by 2030, versus 136mn m3/d at present. It might also create four million jobs over the next five years and add 0.5% to GDP growth over the next ten, EPE estimates.

"Only with this new law, natural gas can become more competitive and boost the country's economy, with new investments, generation of jobs and income", said the Brazilian Petroleum and Gas Institute (IBP), commenting on the bill’s approval. IBP is an institutional representative of Brazil’s oil and gas industry which brings together more than 160 associated companies and professionals.

The basic text of the gas bill was approved by Brazil’s upper house of parliament, the Federal Senate, in December last year. It was then sent back to the lower house, the Chamber of Deputies, for further amendments, and those lawmakers approved it in March.

The new law intends to more closely integrate the gas chain – production, transportation, processing, storage, liquefaction, regasification and end use – into the electrical system. Under the new rules, industrial consumers will be able to buy directly from suppliers. Before, only Brazil’s state-run oil company Petrobras could supply gas to local distributors in Brazil’s states, who in turn were the only sellers to consumers.

The law establishes an authorisation regime for gas pipelines, simplifying the regulatory process and making every player able to build, expand, operate and maintain pipelines freely, at their own risk. It creates a similar regime for underground gas storage.

The law also ensures that third parties can access infrastructure such as natural gas processing units and LNG liquefaction and regasification terminals, at a price. Currently only Petrobras can use these facilities. It provides a regime for contracting gas capacity at entry and exit points in the pipeline network, reducing red tape.

The new law has been welcomed by Brazilian industry as a move that would lead to greater prosperity for the gas sector. The president of the Brazilian Association of Industrial Energy Consumers, Paulo Pedrosa, said the bill would “stimulate competition among gas distributors as well as among Brazilian states.” States that create the right conditions will support local business, he said, noting that Rio de Janeiro, Sergipe, Amazonas and Espirito Santo had already broken up their gas distribution monopolies since the bill’s approval.

Rivaldo Moreira Neto, CEO of Brazilian consulting firm Gas Energy, also hailed the legislation, saying it represented a remarkable move towards gas market liberalisation after a decade of discussions within the Brazilian Congress.

IBP notes that the law will encourage companies to increase their investments across the supply chain, from gas production to the construction of new processing capacity.

The bill alone will not bring about the hoped-for boost in investment, however. Petrobras’ ongoing divestment programme must remain on track, and access to pipelines still reserved by the state oil firm must be expanded.

While Petrobras’ divestment plan has been underway for some years now, the company still accounts for 70% of Brazilian gas production and 100% of the country’s gas imports. It also remains Brazil’s main gas infrastructure operator.

However, the company itself has shown commitment to changing this status quo, continuing to offload infrastructure assets. In September it also signed terms of cessation of conduct (TCC) with Brazil's national competition regulator (CADE), in which it pledged to open up access to its transmission and processing assets and sell at least one of its LNG plants.

Petrobras sold a 90% interest in Brazil’s largest gas pipeline company TAG in 2019 to France’s Engie and Canadian investment fund Caisse de Depot and Placement du Quebec (CDPQ) for $8.6bn, and then shed the remaining 10% share last year. In 2017 it also divested a 90% stake in pipeline firm Nova Transportadora do Sudeste (NTS) to affiliates of Brookfield Asset Management and is seeking to sell the remaining 10%.

Petrobras is also working to sell its positions in TBG, which manages gas transportation in Brazil’s middle west region, the Brazil-Bolivia Pipeline and Gaspetro, which has interests in 19 Brazilian regional gas distribution companies.

Gaspetro is considered the most attractive of the Petrobras asset up for sale. The Brazilian oil company holds a 51% interest in Gaspetro while Japan’s Mitsui has 49%. In 2019, Gaspetro supplied 29mn m3 /d of gas to roughly 500,000 clients through a distribution network of more than 10,000 km of gas pipelines.

Still, more work is needed to ensure that these divested assets are truly available to third parties. According to a study by Gas Energy, private companies still do not have sufficient access to TAG and NTS even though they are no longer under Petrobras’ control. Increased access will lead to cheaper gas, Gas Energy argues.

“Now, it is important to establish rules and adaptations so the market can operate with more confidence and safety over the available capacity of those pipelines,” Gas Energy’s Moreira Neto said in a recent webinar. “We expect that Brazil’s Oil and Gas Regulator (ANP) and other gas pipeline companies will work together in this agenda and create wider access to the pipelines for other companies.”

Petrobras was created in 1953 and given a legal monopoly over all oil and gas developments in the country. In its first year, it produced 2,700 b/d of oil. It is now ranked by Forbes as the 70th largest public company in the world, with production in 2020 of more than 5mn barrels of oil equivalent/day.