Presenting BP’s 2022 edition of the Statistical Review of Global Energy, Spencer Dale, BP’s chief economist, warned that “As COVID-19 restrictions around much of the world are relaxed and economic activity recovers, energy consumption is expanding sharply, increasing the demands on available energy supplies, and highlighting fragilities in the system.” He went on to say “The challenges and uncertainties facing the global energy system are at their greatest for almost 50 years, at the time of the last great energy shocks of the 1970s.” 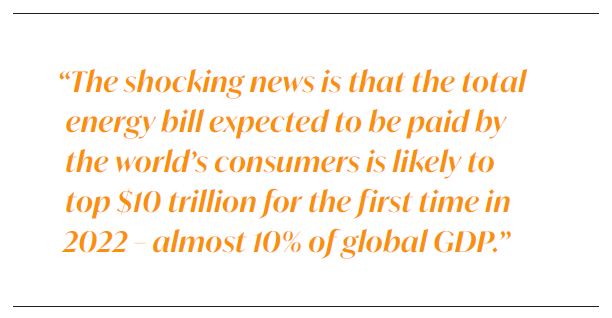 The war in Ukraine has upended global energy markets and overshadows developments in 2022. It “threatens to lead to shortages in food and energy, which could detract materially from health and wellbeing across the globe.” The review states that the growing energy shortages and increasing prices highlight the continuing importance of energy ‘security’ and ‘affordability’ alongside ‘lowering carbon’.

The review’s key findings are:

Despite the rapid growth in renewables, fossil fuels still provide 82% of global primary energy demand (see figure 1) – much the same as it has been for the past 50 years.

What the Ukraine war brought home is the enduring importance of fossil fuels, but also the importance of global energy security and energy affordability.

But, as Dale pointed out, the most immediate concern now is the energy impact of Russia’s invasion of Ukraine, which has upended global natural gas and oil markets. As a result of it, global energy and mineral prices that rose sharply in 2021 continue to do so in 2022 with a heavy toll on the global economy. With the Ukraine war becoming protracted, fears of recession, increasing food shortages and soaring prices, mean that the climate crisis is taking a back seat.

Not only, natural gas consumption increased by 5.3% in 2021, but it also crossed the 4tn m3 mark for the first time. However, its share of global primary energy remained at 24%, the same as in 2020.

Even though natural gas in power generation increased by 2.6% in 2021, its share decreased from 23.7% in 2020 to 22.9% in 2021, reflecting the fact that the share of renewables in global power generation continued to increase at a rapid rate.

Evidently, the dip in 2020 was temporary. Leaving this aside, emissions were more or less unchanged between 2018 and 2021. In fact, apart from 2020, emissions have been rising every year since the Paris Agreement was reached in 2015, contributing to global warming.

Dale said “Considerable progress has been made in sovereign pledges to achieve net zero, but in global aggregate terms, those growing ambitions have yet to translate into tangible progress on the ground.” 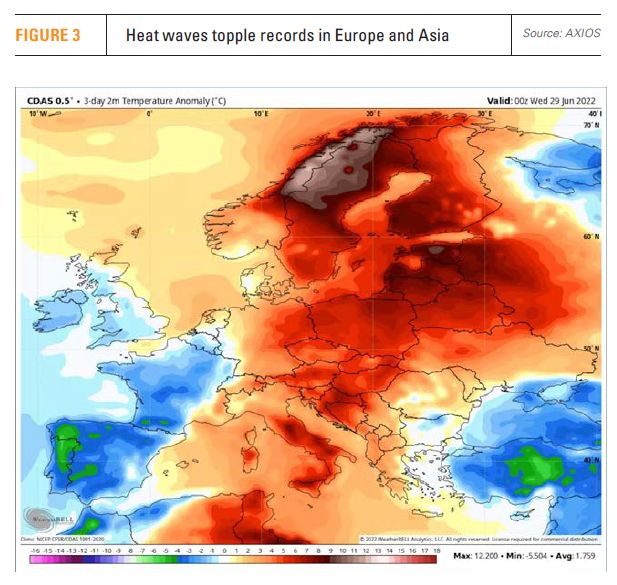 As the review concludes, “the world remains on an unsustainable path.”

This appears to be the main contributory factor to heat waves that continue to topple records in Europe and Asia (see figure 3). The map shows temperature anomalies during the 3 days ending on 29 June.

There is evidence to show that as the global climate warms, the frequency and longevity of heat waves increase dramatically, causing heat waves to become more intense, more frequent and long lasting.

Apart from contributing to more frequent and more devastating wildfires, searing heat, exacerbated by global warming, leads to massive increases in energy demand for cooling. Reducing energy consumption in a world that is getting much hotter will be a challenge.

The shocking news is that the total energy bill expected to be paid by the world’s consumers is likely to top $10 trillion for the first time in 2022 – almost 10% of global GDP.

According to THE International Energy Agency’s (IEA) new World Energy Investment 2022 report, the energy crisis and the war in Ukraine appear to be spearheading a substantial increase in new energy investments to tackle the energy crisis and boost economic recovery. This is estimated to reach 8%, to $2.4 trillion in 2022, well above pre-pandemic levels, but almost half of it is linked to higher costs. 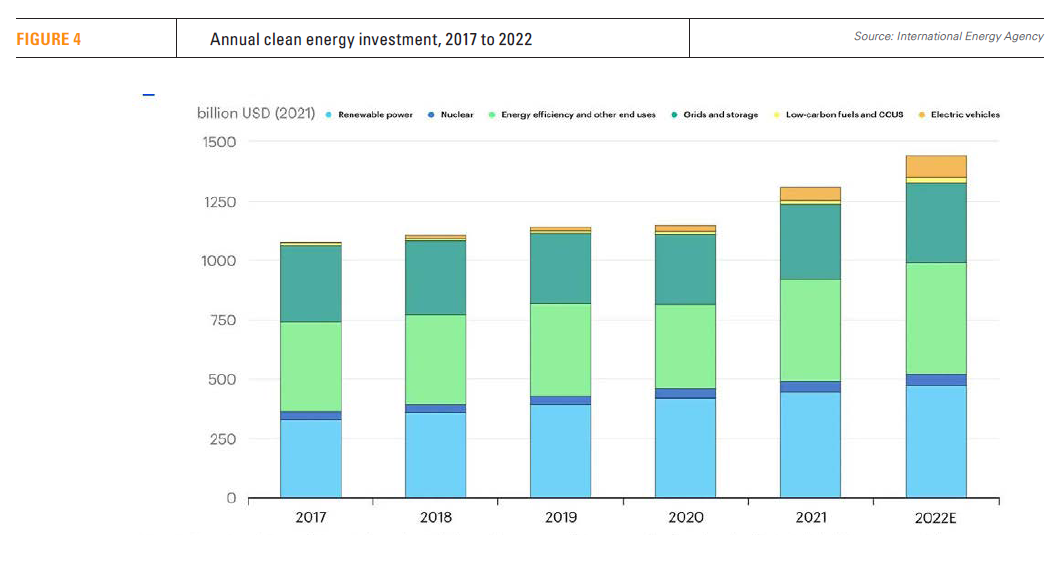 The fastest growth in energy investment is coming from the power sector, mainly in renewables and grids, and from energy efficiency (see figure 4), but almost all of it is taking place in advanced economies and China.

But despite this increase in clean energy investments, the IEA concludes that the levels of capital spending are still far from sufficient to tackle the energy and climate crises.

The US Supreme Court ruling against federal regulation of carbon emissions is a major setback, putting into question US commitment and leadership to tackle climate change. It is also another setback to global efforts to get to grips with the climate crisis. This has already prompted China to “urge developed countries, including the US, to face up to their historical responsibilities.”

High prices are encouraging some countries to step up fossil fuel investment – including in coal, up 10% in 2021 – as they seek to secure and diversify their sources of supply.” Coal’s competitiveness and abundance of supplies are alluring to Asian countries. In this global crisis their priority – ahead of climate change - is to bring energy and food costs down.

The IEA states that, despite an 8.5% increase, oil and gas investments in 2021 remained well below 2019 levels, and will continue so in 2022. This is despite the fact that the sector’s income is set to jump to $4tn in 2022, more than twice its five-year average, with the bulk of it going to major oil and gas exporting states.

Uncertainties about the longer-term future of oil and gas, due to clean energy pressure, and lack of government policy clarity, are keeping the brake on investments, with the danger that the current tightness in oil and gas supplies – and high prices – will continue. With sanctions impacting Russian fossil fuel and oil product exports, these problems are expected to continue into 2023 and possibly beyond.

Aramco CEO, Amin Nasser, confirmed at the World Economic Forum at Davos, that the global oil crunch is due to lack of investment. He said last year’s message from the IEA that world oil demand was set to fall and no new investment in fossil fuels was needed had a profound impact. “We need a more constructive dialogue. They say we don’t need you by 2030, so why would you go and build a project that takes 6-7 years. Your shareholder will not allow you to do it”. This makes it difficult for CEOs to make investments.

He also pointed out that “The world is running with less than 2% of spare oil capacity. Before COVID the aviation industry was consuming 2.5mn b/d more than today. If the aviation industry picks up speed, you are going to have a major problem.” In addition, COVID restrictions in China would not last long and global oil demand would therefore resume its growth. But counteracting this could be recession in the US and Europe, as well as persistently high prices, crimping demand. Nevertheless, expectations are that oil demand will continue to grow in 2022 and 2023, surpassing 2019 levels by next year.

Whatever happens, the recovery continues to be chaotic. 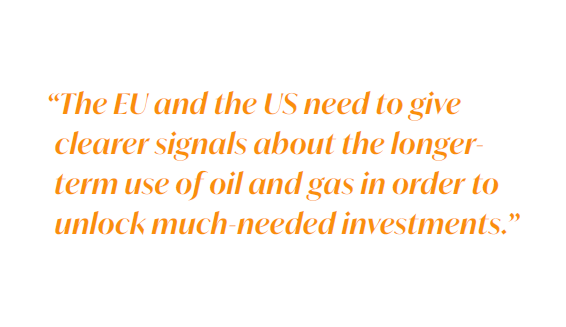 With the IEA projecting that the world may still be 66% reliant on fossil fuels in 2050, the EU and the US need to give clearer signals about the longer-term use of oil and gas in order to unlock much-needed investments. Not doing so will lead to another crisis in a few years down the line, as supply shortages become more acute.

The world needs to pursue development of clean energy and renewables going forward. But while intermittency remains a problem, renewables need back-up. That means that – if dependence on coal use is to be stemmed and reversed – with the increase in the adoption of renewables, gas is becoming even more important than it was before, including LNG.

The decision by the European Parliament on July 6 to back EU Taxonomy rules labelling investments in gas and nuclear power plants as ‘sustainable’, opens the way for their limited use during transition. The conditions for gas are strict: gas is only possible to replace coal, until 2030, under emission thresholds that are not considered dangerous and with reinforced transparency obligations.

With the energy crisis and the war in Ukraine continuing unabated, BP’s warning about the fragilities in the global energy system will continue to be of concern for some time yet.