BP announced that it has committed to two new UK North Sea oil developments which are expected to produce 30,000 b/d at peak. Alligin and Vorlich are satellite fields near infrastructure, meaning they can be quickly developed through established offshore hubs, the UK major said April 10.

Alligin, a two-well development west of Shetland, will be tied back to BP’s Glen Lyon floating, production, storage and offloading (FPSO) vessel (pictured above, courtesy of BP).

Vorlich, also a two-well development in the central North Sea, will be tied back to the Ithaca Energy-operated FPF-1 floating production facility which lies at the centre of Ithaca’s Greater Stella Area production hub. Both fields are expected to come on stream in 2020.

BP told NGW that "Vorlich is essentially oil production in the early stages but as the reservoir pressure depletes it becomes a gas producer. Capacity at most is ca 67mn ft³/day."

BP has awarded a major contract for the Alligin development to Subsea 7, which will provide project management, engineering, procurement and construction services for the subsea pipelines from its Aberdeen offices. Meanwhile, BP has submitted its environmental impact assessment for the Vorlich development to the UK government's Department for Business, Energy and Industrial Strategy and is finalising its contracting strategy for the development.

Incoming BP North Sea regional president Ariel Flores said: “BP is working hard to modernise and transform the way we work and a key focus of this is maintaining safety while optimising the pace at which we deliver activity. Through our Alligin and Vorlich developments we are simplifying and accelerating the stages of delivery to improve project cycle time, reduce costs and, importantly, add new production to our North Sea portfolio. These projects follow on from a period of record investment by BP in the North Sea which helped deliver our Quad 204 project last year and will deliver our Clair Ridge project which is planned to start-up later in 2018. While not on the same scale as Quad 204 and Clair Ridge, Alligin and Vorlich will lead to significant production gains and further demonstrate BP’s commitment to the North Sea.”

Flores, from the US, took over the North Sea job last month having previously served as general manager of the BP-led Rumaila giant oilfield in Iraq. He replaces Mark Thomas who was two years in the job.

Alligin (BP 50% operator; Shell 50%) is an oilfield with 20mn barrels of recoverable reserves in the Greater Schiehallion Area, some 140 km west of Shetland. Vorlich (BP 66% operator; Ithaca Energy 34%) will produce over 30mn boe and is about 241 km east of Aberdeen. 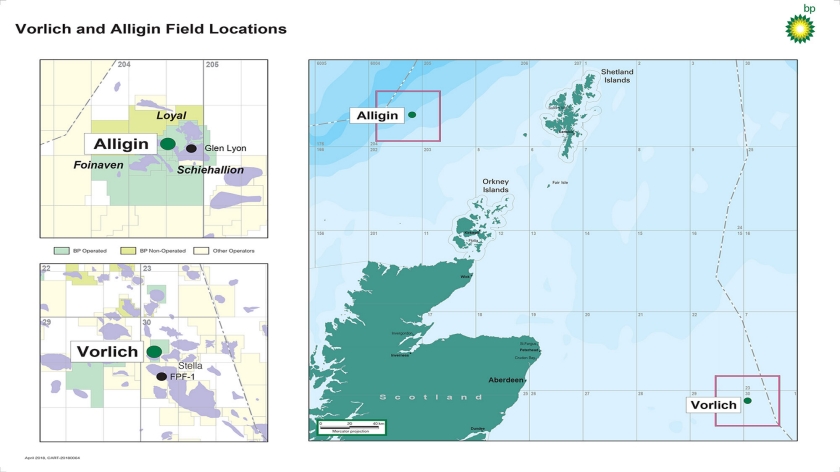