BP said late July 14 that “following significant progress in resolving outstanding claims arising from the 2010 Deepwater Horizon accident and oil spill, it can now reliably estimate all of its remaining material liabilities in connection with the incident.”

It now expects to take an after-tax non-operating charge of around $2.5bn in its 2Q 2016 results, due out July 26. It said this takes into account its estimated remaining liabilities, plus other positive tax adjustments.

The charge is expected to include a pre-tax non-operating charge associated with the oil spill of around $5.2bn – bringing the cumulative pre-tax charge relating to the spill on the BP-operated Macondo field to $61.6bn, or $44bn after tax.

Finance chief Brian Gilvary reconfirmed that BP expects to continue to use proceeds of divestments to meet Deepwater Horizon commitments in line with the financial framework laid out in previous quarters. 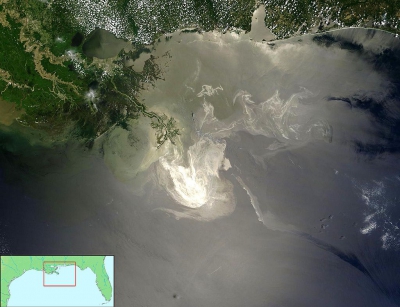 NASA image taken from its Terra Satellite on May 24, 2010 of the oil slick from the Macondo explosion and fire illuminated by sunlight (Photo credit: NASA)

The July 14 announced charge includes the estimated cost of settling all outstanding business and economic loss claims under that settlement, which are expected to be paid by 2019.

In February 2016, the US federal district court estimated that there were more than 85,000 valid plaintiffs that either opted out of the main US Plaintiffs' Steering Committee settlement or were excluded from it. BP now says the vast majority of these claims has since been settled or dismissed, as an order of the court confirmed July 14. An estimate of the cost of the remaining claims, expected to be paid by end-2016, is also included in this charge. So too is a $175mn separate settlement announced last month.