Bloomberg New Energy Finance released its New Energy Outlook 19 (NEO 2019) in June, concentrating on the electricity system. However, it added new sections on coal and gas power technology; the grid of the future; energy access and policy; and decarbonisation technology.

BNEF’s key findings are that cheap renewables and batteries will completely change the global electricity system by 2050, as:

BNEF estimates that $13.3 trillion will be spent on power generation between 2018 and 2050, adding 12 TW of capacity. Of this, $5.3bn [or trillion?] will be invested in wind, $4.2tn in solar and $0.84tn in batteries and four fifths of new power plants will be zero carbon. It also expects $11.4 trillion to be invested in grid expansion.

Globally, coal power generation is expected to peak by 2026 and by 2032 wind and solar will exceed coal power. But regional performance will be mixed. Coal will collapse in Europe and the US but will continue growing at a slow pace in China, India and south-east Asia until it peaks around 2030. NEO 2019 states that "by 2050, coal-fired generation will be down 51%, supplying just 12% of world electricity, from 37% today."

Global electricity demand is expected to increase 62%, resulting in global generating capacity almost tripling between 2018 and 2050.

The NEO 2019 lead analyst, Matthias Kimmel, said: “Our power system analysis reinforces a key message from previous New Energy Outlooks – that solar photovoltaic modules, wind turbines and lithium-ion batteries are set to continue on aggressive cost reduction curves, of 28%, 14% and 18% respectively for every doubling in global installed capacity. By 2030, the energy generated or stored and dispatched by these three technologies will undercut electricity generated by existing coal and gas plants almost everywhere.” Batteries are increasingly turning into a disruptive force in the global electricity sector. 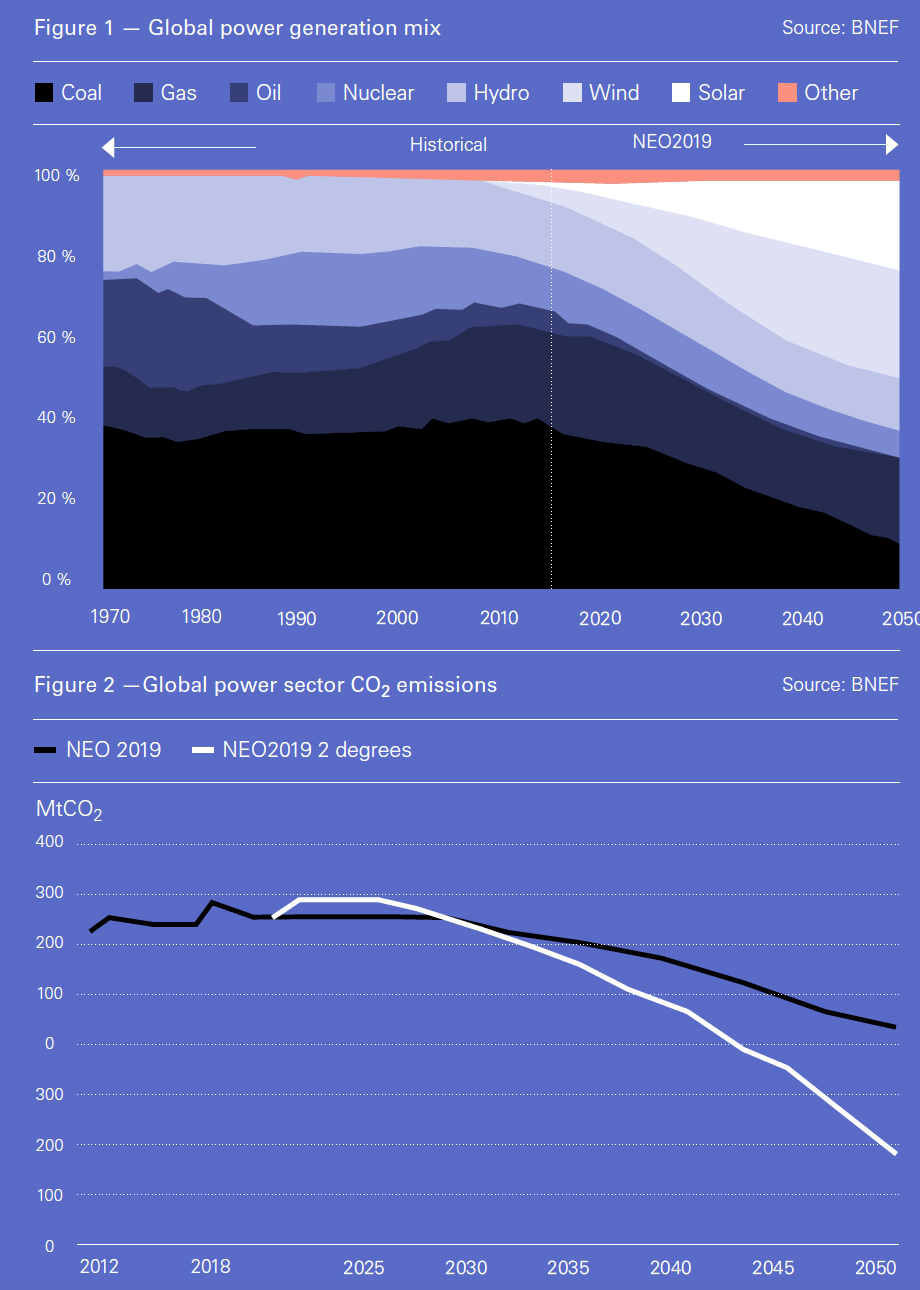 This will lead to wind and solar growing from 7% of generation in 2018 to 48% by 2050 (Figure 1), while the contributions of hydro, natural gas, and nuclear will remain roughly level on a percentage basis. But coal will nose-dive from 37% in 2018 to 12% in 2050. And all this will be happening without introducing additional direct subsidies for existing solar and wind technologies.

In addition, rooftop solar and behind-the-meter batteries will be helping shape an increasingly decentralized grid globally.

A forced phase-out of all coal would lower emissions by a further 49%, but would not get the world to a maximum temperature rise of 2 °C by 2050. It would, though, be good for gas and renewables, with gas getting a 35% boost. Bringing emissions to fit in the 2 °C world would also mean electric heat and transport.

But, worryingly, the head of energy economics at BNEF, Elena Giannakopoulou, warns that “to achieve this level of transition and decarbonisation, policy changes will be required – namely, the reforming of power markets to ensure wind, solar, and batteries are remunerated properly for their contributions to the grid,” adding that NEO 2019 “assumes that markets operate rationally and fairly to allow lowest-cost providers to win.”

Most of this growth will take place in China as the country decommissions over 0.5 TW of coal capacity by 2050. Gas demand will also increase in India, the US and Middle East and north Africa over this period.

But gas demand will almost completely disappear by 2050 in Europe’s power generation mix.

However, BNEF’s assessment of fuel cost-competitiveness is based on US Henry Hub gas at $3-4.80/mn Btu and global gas prices to converge towards US netback parity and the cost of bringing new LNG liquefaction capacity online. There are increasing views that current low gas prices may persist in the longer term. As a result, this assumption may be challenged, with gas continuing to play an important role in the global power energy fuel mix for longer.

NEO 2019 states that China will continue to be the largest market for wind and solar. Together, these will grow from 8% in 2018 to 48% of China’s total power generation by 2050, with photovoltaic (pv) capacity reaching 1.3TW, or 17% of global pv installed capacity.

Wind will reach 1.2TW in China, a third of the world’s total. Nuclear will increase by a factor of four by 2050, to 182 GW. But China is also continuing to build a modern fleet of coal-fired plants.

Nevertheless, BNEF expects China’s power sector emissions to peak by 2027, and then to fall by more than half over the following 20 years.

However, there are challenges. During the first half of 2019 Chinese investment in renewables dropped 39% owing to policy uncertainties. But despite this drop, China still accounts for a massive 24% of global renewable energy.

India will overtake the US to become the second-largest power system globally by 2044, growing more than six times by 2050 versus 2018. This will be driven by over 1 TW of cheap solar and wind, which will be some of the cheapest globally; but also by more coal-fired power generation.

The US will keep reaping the benefits of cheap and plentiful gas which, with renewables, will continue to replace coal and nuclear power. Renewables penetration, supported by batteries, will reach 43% by 2050 and more use of gas and renewables will help bring emissions down by 54% against 2018.

Europe is expected to lead global electricity decarbonisation, generating 92% of its electricity from renewables by 2050, driven by strong policies and carbon pricing. This will result in a 95% reduction in power sector emissions by 2050.

Already a number of European countries are aiming for net-zero emissions by 2050. The UK has actually put legislation in place.

The incoming European Commission president, Ursula von der Leyen, has already promised to raise decarbonisation goals with a reduction target of up to 55% by 2030.

It has also been reported that, driven by growing support for green parties during the recent European Parliament elections,  Germany, Italy, Greece and Slovakia have now joined a group of 14 EU member states that support a bill targeting EU-wide carbon neutrality by 2050. With Germany on board it is hoped that a plan could be finalised this year.

Asia’s electricity demand will more than double to 2050. At $5.8 trillion, the whole Asia Pacific region will account for almost half of all new capital spent globally to meet that rising demand. China and India together are a $4.3 trillion investment opportunity. The US will see $1.1 trillion invested in new power capacity, with renewables more than doubling its generation share, to 43% in 2050.

However, it is not all plain sailing. As well as China, the US and Europe also experienced renewable investment downturns in the first half of 2019. BNEF expects recovery during the second half, however.

BNEF says that with wind and solar providing 50% of global electricity by 2050, the power sector will be put back on track on a 2 °C path to at least 2030. But new technologies will be required to curb emissions beyond that. It says that “to keep an electrified energy sector on a 2 °C trajectory, we will need to deploy additional zero-carbon technologies that are dispatchable and economic running at low capacity factors, or technology that can capture and sequester emissions at scale.”

Wind and solar will be capable of reaching four fifths of the electricity generation mix in a number of countries by 2050, with the help of batteries. But going beyond that will be difficult without new technologies such as nuclear, biogas-to-power, green hydrogen-to-power and carbon capture and storage.

BNEF’s NEO director, Seb Henbest, said that there is a need “to back research and early deployment of these other technologies so that they can be harnessed at scale from the 2030s onwards.”

Wind and solar now provide the cheapest electricity in more than two-thirds of the world and BNEF expects that by 2030 “they will undercut commissioned coal and gas almost everywhere.”

However, coal-fired power generation may yet prove to be substantially more resilient than implied in Figure 1, driven by cost reductions, modern clean coal technology and social factors.

Trade wars and sanctions will also play a role in shaping the world’s future energy mix. Security of energy supplies will give priority to domestically produced energy, which includes coal.

For the first time BNEF assumed in NEO 2019 that 100% electrification of heat and transport globally may be possible. This would require overall electricity demand to grow by about 25% compared to a future in which transport and heat only electrify, as far as assumed in the main NEO 2019 scenario. This may prove to be highly challenging, but if achieved it could save 125 gigatons of CO2 emissions between 2018 and 2050.

This could be assisted by carbon pricing. At a meeting in the Vatican in June to address climate change, led by Pope Francis and attended by CEOs of oil companies and investment firms, the final statement recommended that: “Reliable and economically meaningful carbon pricing regimes, whether based on tax, trading mechanisms or other market-based measures, should be set by governments at a level that incentivises business practices, consumer behaviour, research, and investment to significantly advance the energy transition while minimizing the costs to vulnerable communities and supporting economic growth.”

But, as BNEF concludes, global energy is going one way. The advantage of wind and solar power is that they are ‘manufactured types of energy’ rather than extracted forms such as coal. As a result, their costs have fallen rapidly and should continue doing so.

However, as BNEF states, “existing coal or gas-fired plants are a different story; they get switched on provided they can cover just their running costs. As a result, BNEF does not expect solar power to undercut existing coal plants in China before 2027.”

But, a final reminder: BP’s latest ‘Statistical Review of World Energy’ report says the world is on an unsustainable path, but yet it needs to produce even more energy. Population growth and rising expectations of living standards lead to the dual challenge of providing more energy with fewer emissions. Renewable energy is growing far more rapidly than any other form of energy but it is still not growing fast enough. NEO 2019 provides some hope of achieving the 2 °C limit, but serious doubts remain.